Background: Heavy ion radiation has more advantages than traditional radiation therapy in the treatment of cancer, mainly because of its superior biological effects. However, there is currently no reliable evidence that heavy ion radiation can induce cell death in hydatid cysts at the cellular and molecular level. In addition, we believe heavy ion therapy could be a potential alternative approach for the treatment of hydatid cysts. Methodology/Principal Finding: The hydatid cysts and protoscolices were obtained from an experimentally infected KunMing mice. LD50 was used to evaluate the death of the protoscolex. The cellular and ultrastructure of the parasites were observed under light and electron microscopes, the damage and copy numbers of mitochondrial DNA (mtDNA) were decided by QPCR. The apoptosis was evaluated by the expression and activity of caspase3. Dose-dependent ionizing radiation induced damage to the initial mtDNA. Echinococcosis cyst after ionizing radiation showed sparse cytoplasm, disorganized and clumped organelles, huge vacuoles, and villus deletions. The kinetic of DNA repair activity after X-ray irradiation was faster than those after carbon-ion irradiation. High doses of carbon ion radiation caused irreversible attenuation of mitochondrial DNA. Cysts showed obvious reduction in size after radiation. Carbon ion radiation was more effective than X-ray radiation in inhibiting hydatid cysts. Conclusions: These studies provide evidence that heavy-ion radiation can cause the extinction of hydatid cysts in vitro. The carbon-ion radiation is more advantageous than X-ray radiation in suppress hydatid cyst. View Full-Text
Keywords: inhibitory effect; ionizing radiation; E. granulosus; hydatid cyst; zoonosis inhibitory effect; ionizing radiation; E. granulosus; hydatid cyst; zoonosis
►▼ Show Figures 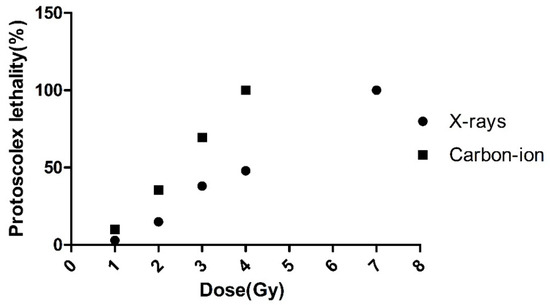