Delirium Assessment in Older People in Emergency Departments. A Literature Review
Next Article in Special Issue

Prevalence of Tinea Capitis among Children in Osogbo, Nigeria, and the Associated Risk Factors

Margaret A. Adekanle 1 and

Tinea capitis is a fungi infection of the scalp that disproportionately affects children in rural and underserved communities in Nigeria. A case-control study was conducted to identify the causative agents and factors that predispose school pupils to tinea capitis in two selected government-owned public primary schools in Osogbo, Southwestern Nigeria. A total of 230 participants were included in the study: 115 cases and 115 controls. Head scrapings were collected from pupils with suspected T. capitis lesions, viewed under Potassium Hydroxide smear microscopy and cultured in Sabouraud’s Dextrose Agar (SDA) for characteristic fungal elements. A total of 105 (91%) samples were successfully cultured, of which 56% (59/105) were from male pupils. Tricophyton rubrum (34%), Tricophyton mentagrophyte (31%) and Microsporum canis (18%) were the most prevalent organisms. Other dermatophytes obtained include Microsporum nanuum (3%), Epidermophyton floccusum (6%), Tricophyton verucosum (1%), and Microsporum gypseum (8%). Pupils between the ages of 4 and 7 years had the highest distribution (67%) followed by those between the ages of 8 and 11 years (39%). Playing with animals, the sharing of combs and not bathing with soap were significantly associated with tinea capitis infection (P < 0.05) in each case. This study showed a high prevalence of tinea capitis caused by the identified dermatophytes in the area. View Full-Text
Keywords: tinea capitis; dermatophytes; school children; Nigeria tinea capitis; dermatophytes; school children; Nigeria
►▼ Show Figures 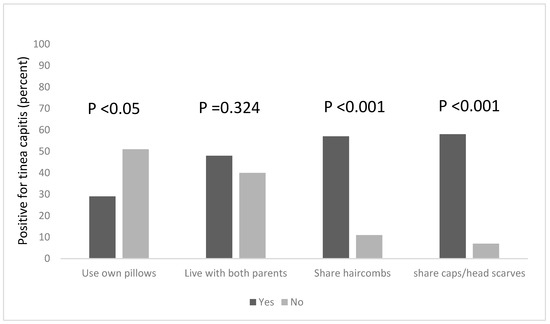