Prevalence of Tinea Capitis among Children in Osogbo, Nigeria, and the Associated Risk Factors
Previous Article in Journal

Appetite, Metabolism and Hormonal Regulation in Normal Ageing and Dementia

As life expectancy is growing, neurodegenerative disorders, such as Alzheimer’s disease, are increasing. This disease is characterised by the accumulation of intracellular neurofibrillary tangles formed by hyperphosphorylated tau protein, senile plaques composed of an extracellular deposit of β-amyloid peptide (Aβ), and neuronal loss. This is accompanied by deficient mitochondrial function, increased oxidative stress, altered inflammatory response, and autophagy process impairment. The present study gathers scientific evidence that demonstrates that specific nutrients exert a direct effect on both Aβ production and Tau processing and their elimination by autophagy activation. Likewise, certain nutrients can modulate the inflammatory response and the oxidative stress related to the disease. However, the extent to which these effects come with beneficial clinical outcomes remains unclear. Even so, several studies have shown the benefits of the Mediterranean diet on Alzheimer’s disease, due to its richness in many of these compounds, to which can be attributed their neuroprotective properties due to the pleiotropic effect they show on the aforementioned processes. These indications highlight the potential role of adequate dietary recommendations for clinical management of both Alzheimer’s diagnosed patients and those in risk of developing it, emphasising once again the importance of diet on health. View Full-Text
Keywords: Alzheimer’s disease; nutrients; mediterranean diet; oxidative stress; inflammation; autophagy; beta-amyloid; tau Alzheimer’s disease; nutrients; mediterranean diet; oxidative stress; inflammation; autophagy; beta-amyloid; tau
►▼ Show Figures 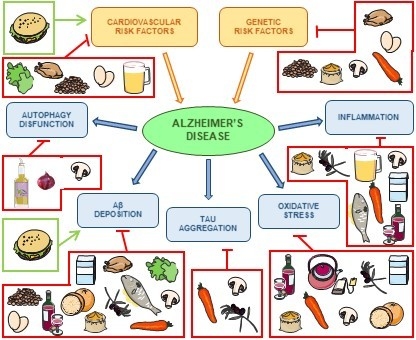