Two party authentication schemes can be good candidates for deployment in Internet of Things (IoT)-based systems, especially in systems involving fast moving vehicles. Internet of Vehicles (IoV) requires fast and secure device-to-device communication without interference of any third party during communication, and this task can be carried out after registration of vehicles with a trusted certificate issuing party. Recently, several authentication protocols were proposed to enable key agreement in two party settings. In this study, we analyze two recent protocols and show that both protocols are insecure against key compromise impersonation attack (KCIA) as well as both lack of user anonymity. Therefore, this paper proposes an improved protocol that does not only resist KCIA and related attacks, but also offers comparable computation and communication. The security of proposed protocol is tested under formal model as well as using well known Burrows–Abadi–Needham (BAN) logic along with a discussion on security features. While resisting the KCIA and related attacks, proposed protocol also provides comparable trade-of between security features and efficiency and completes a round of key agreement in just ms, which makes it a promising candidate to be deployed in IoT environments. View Full-Text
Keywords: Internet of Things; V2V Security; Internet of Vehicles; key compromise impersonation attack; 2PAKA Internet of Things; V2V Security; Internet of Vehicles; key compromise impersonation attack; 2PAKA
►▼ Show Figures 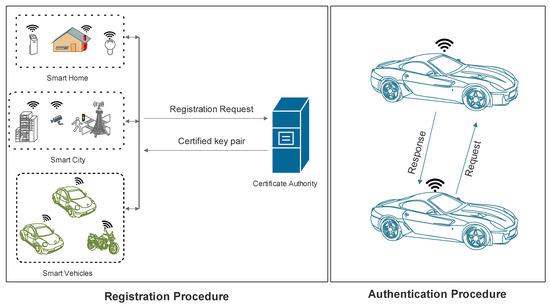