A theoretical formula is derived using the radiated electric field at the antenna element. The coordinate system is chosen with the dual-polarization radiating element located at the origin, and the antenna plane is in the plane as shown in Figure 1. We develop the radiation model and solve the solution of the CPI objective function based on a pair of crossed dipoles.

A PPAR antenna is composed of elements whereby each is treated as a pair of dipoles placed orthogonally as displayed in Figure 1. The dipole moment is given by where is the excitation amplitude, excitation phase, and the unit vector along the dipole direction.
The radiated electric field is where r is the distance from the antenna, k the wavenumber , the radar wavelength, and  the permittivity for an assumed uniform precipitation-free atmosphere.
Based on formula (10) and formula (11), the radiated electric fields of ports 1 and 2 are
formula (2) and formula (3) are rewritten as where , , that is, the radiation characteristics on the hemisphere pointing to the positive x-axis.
On the basis of formula (5) and formula (6), when the activated ports radiate the RHEP wave, the co-polarization and cross-polarization components are
Similarly, when the activated ports product LHEP wave, the co- and cross-polarization components are
Therefore, formula (8) is rewritten as
For the given beam direction, the optimal polarization state is calculated. Specifically speaking, a set of polarization parameters is obtained for each set of beam angle , minimizing the ratio . The expression is given by
In our experiments, a standard constrained nonlinear multivariable function fmincon in MATLAB 2017b (MathWorks, Natick, MA, USA) is used to find the minimum of . The nonlinear programming solver can find the minimum of formula (17), thereby calculating and p for the given and .

The dual-polarization antenna could acquire the four components of the scattering matrix alternately or simultaneously, that is, STSR and ATSR mode. The latter can estimate all four components of the backscattering covariance matrix during two or more pulses. Through the process of radiation, scattering, and propagation of the electromagnetic wave, the PSM measured by the receiver can be written as Consistent with the polarization definition and expression in [1,7], is the intrinsic backscatter matrix of the target, while is the measured backscatter matrix. is the projection matrix and represents projections of radiated fields onto the defined polarization basis. Its definition and formula are consistent with that in [1], and the superscript T is the transpose operator. In this paper, we assume that the observed object is a metallic sphere.
In order to evaluate the superiority of the configured polarization state for the polarization measurement application, we use the polarimetric variables including and [18]. The bias of differential reflectivity is denoted as . The expected requirement of for accurate polarization measurement is less than 0.1 dB for the PPAR system [10]. Similarly, the bias of the linear depolarization ratio is described as . We assume that the constraint condition to is less than dB for accurate polarization measurement:

The dual-polarization radiation element of the PPAR herein is composed of a pair of crossed dipoles. In this section, the comparison is made among the antenna patterns by radiating the linear, circular, and elliptical polarization wave, including the co-polarization and cross-polarization components.

In this paper, an effective polarization state configuration method has been proposed to reduce the cross-polarization level and enhance the CPI in a wide beam scan range of the PPAR antenna. The amplitude and phase of the dual-polarization elements are modulated for each beam direction according to the CPI requirement. In contrast to the LP and CP state, the radiated polarization wave is EP state, and it is received by using a set of elliptical polarization basis. For the defined co-polarization and cross-polarization components, the PSC technique is formulated as a minimum problem of CPI, thereby achieving the available amplitude ratio and phase difference. This method is beneficial for reducing the polarization measurement bias even in a wide scan angle. Moreover, we take a dual-polarization dipole antenna, for example, to test the priority of the proposed method. The biases of the polarization variables and are less than dB and dB, respectively, in most of the beam directions within . Numerical simulations reveal that the obtained CPI could meet the requirement of the polarization measurement for PPAR.

Y.L. carried out the model developing and detailed analysis (Conceptualization). Z.W. provided critical comments and was also involved in writing the manuscript and data curation (Data curation). C.P. conducted the original draft in visualization/data presentation (Visualization). X.W. supervised the work (Supervision). All authors have read and agreed to the published version of the manuscript.

The authors would like to thank Jiapeng Yin for many useful discussions on the signal processing and antenna design. 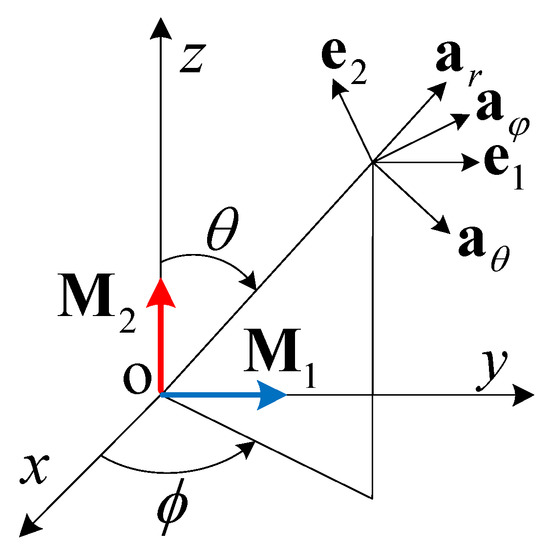 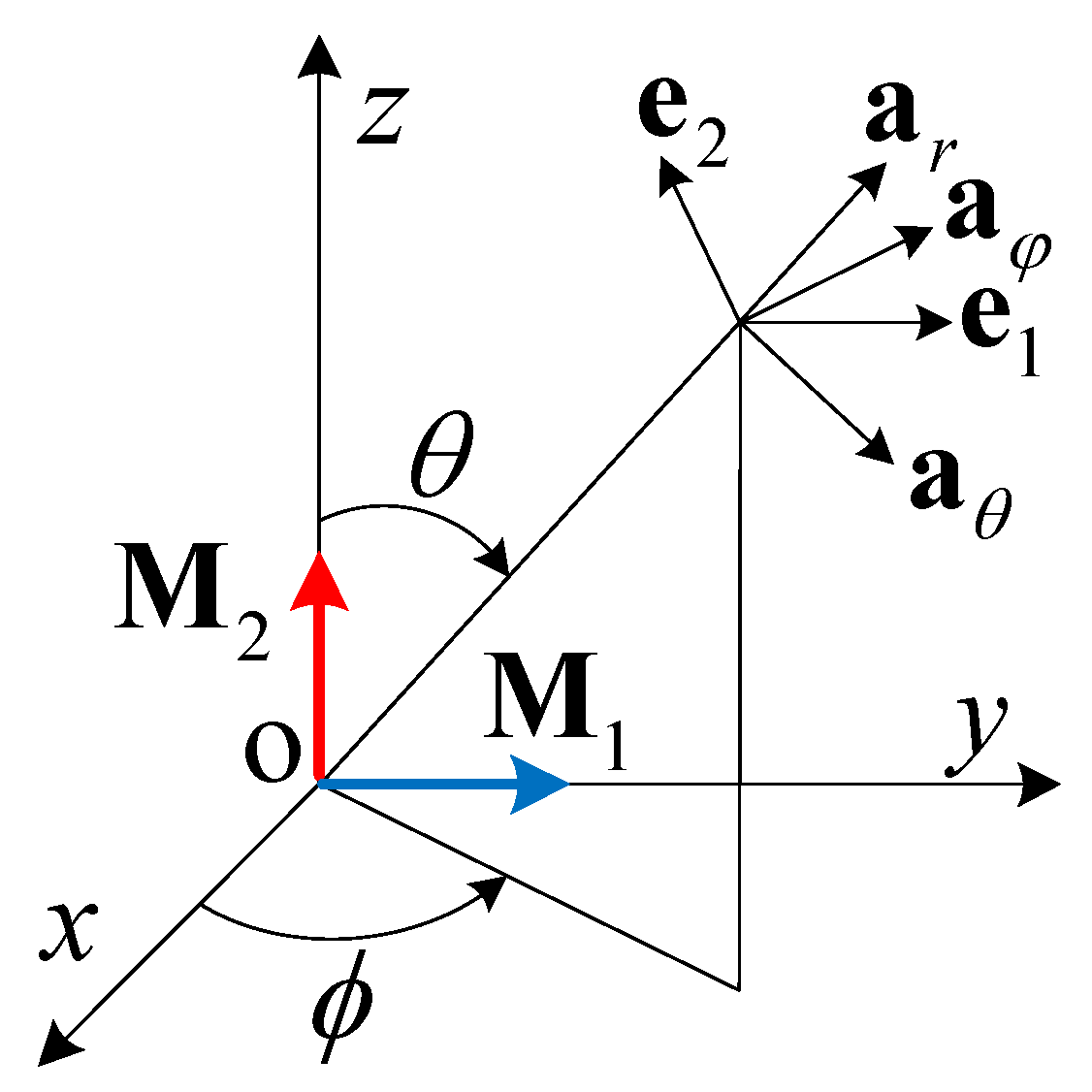 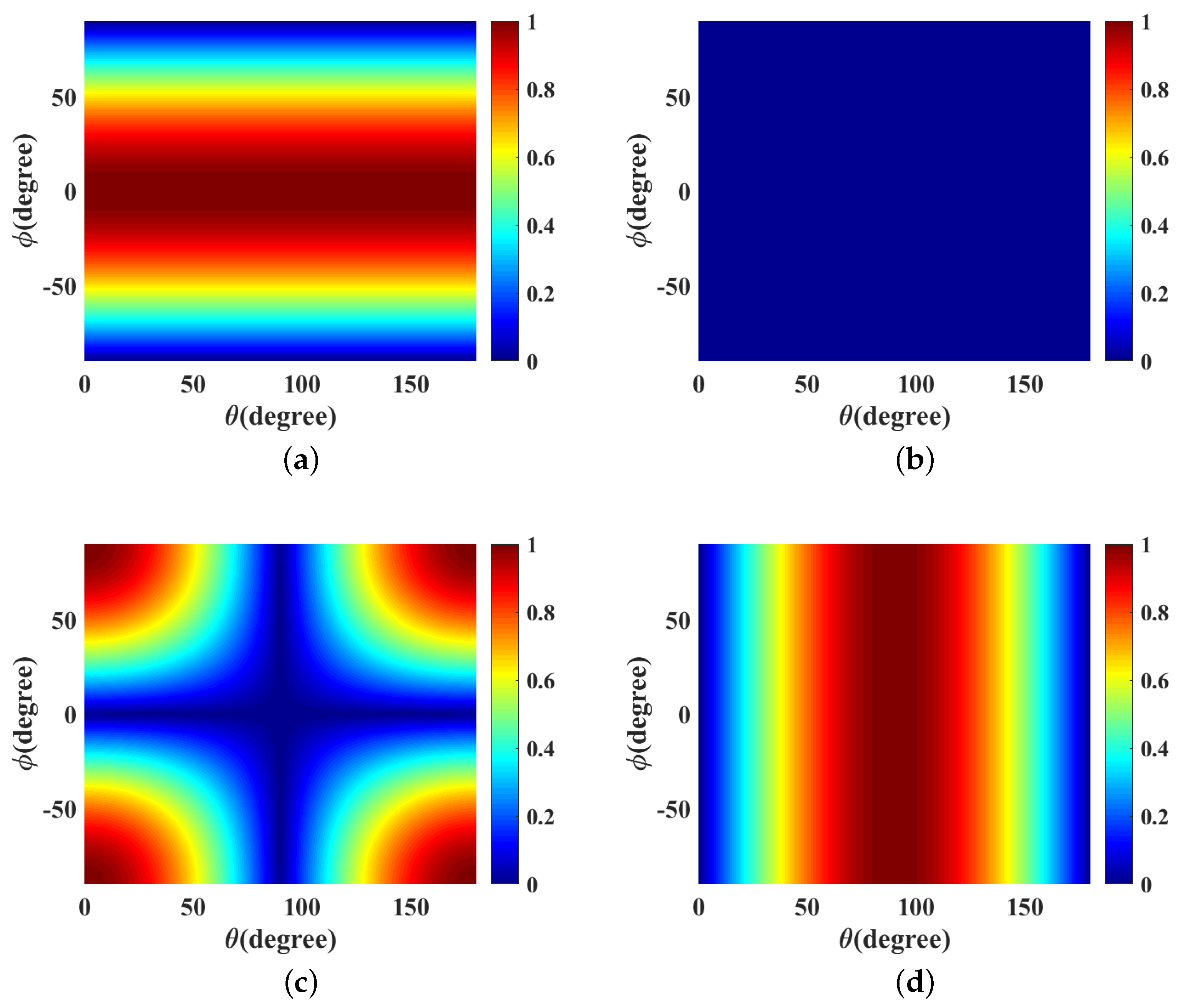 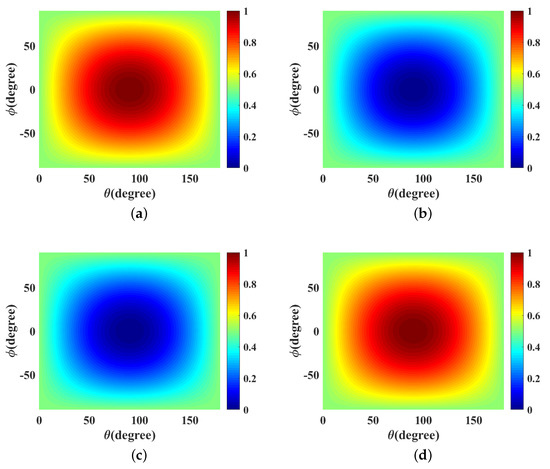 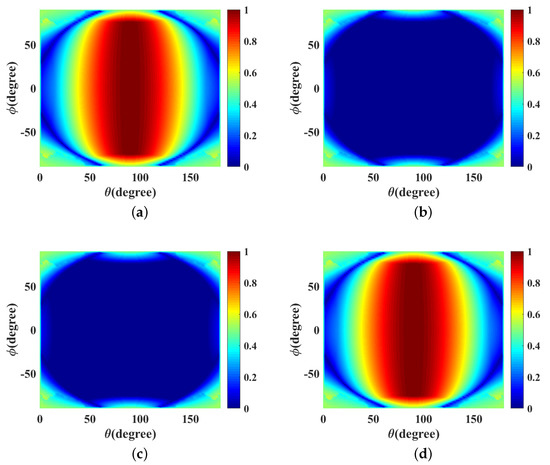 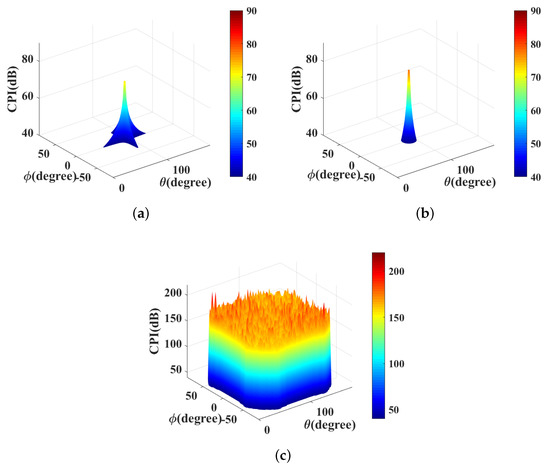 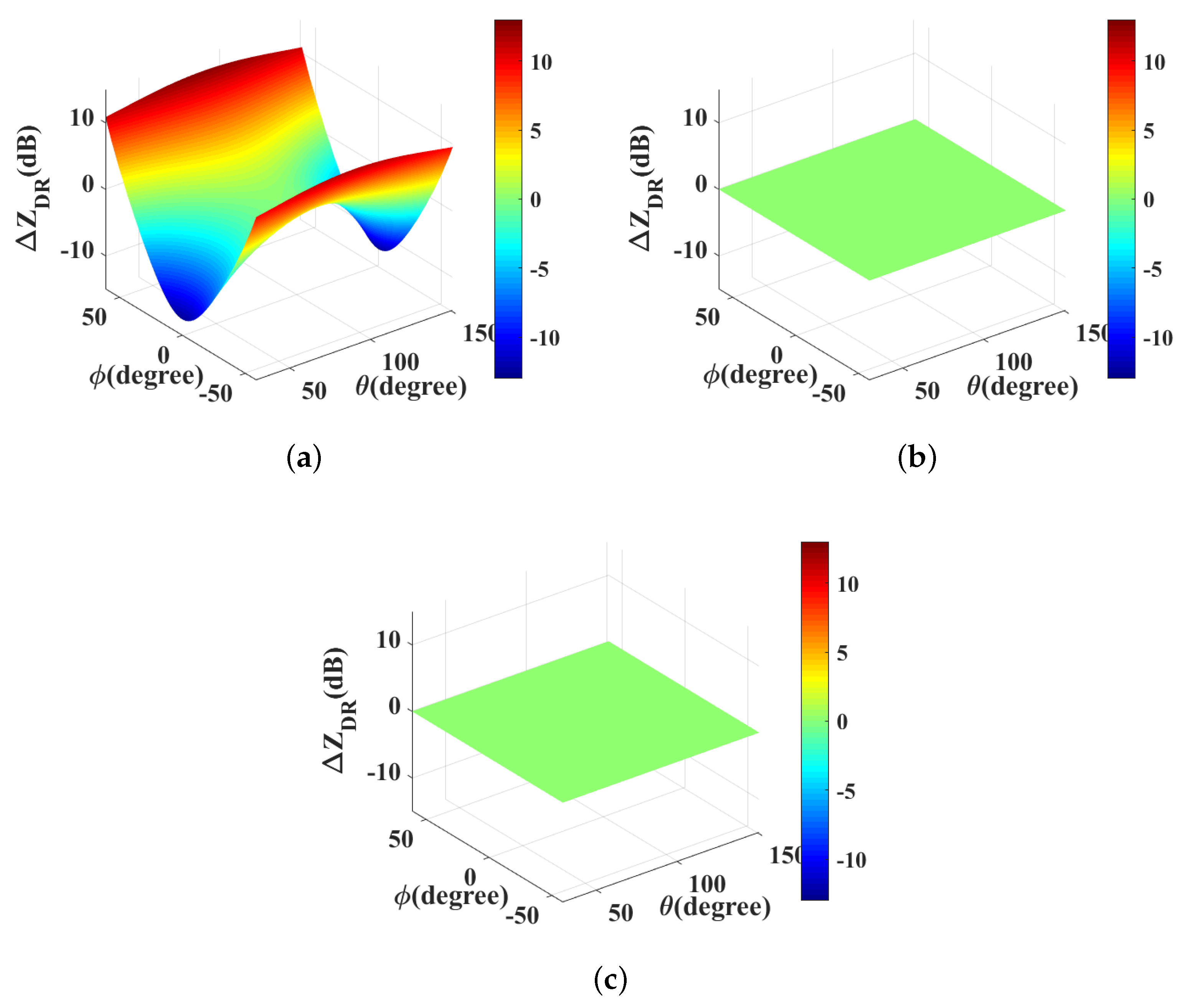 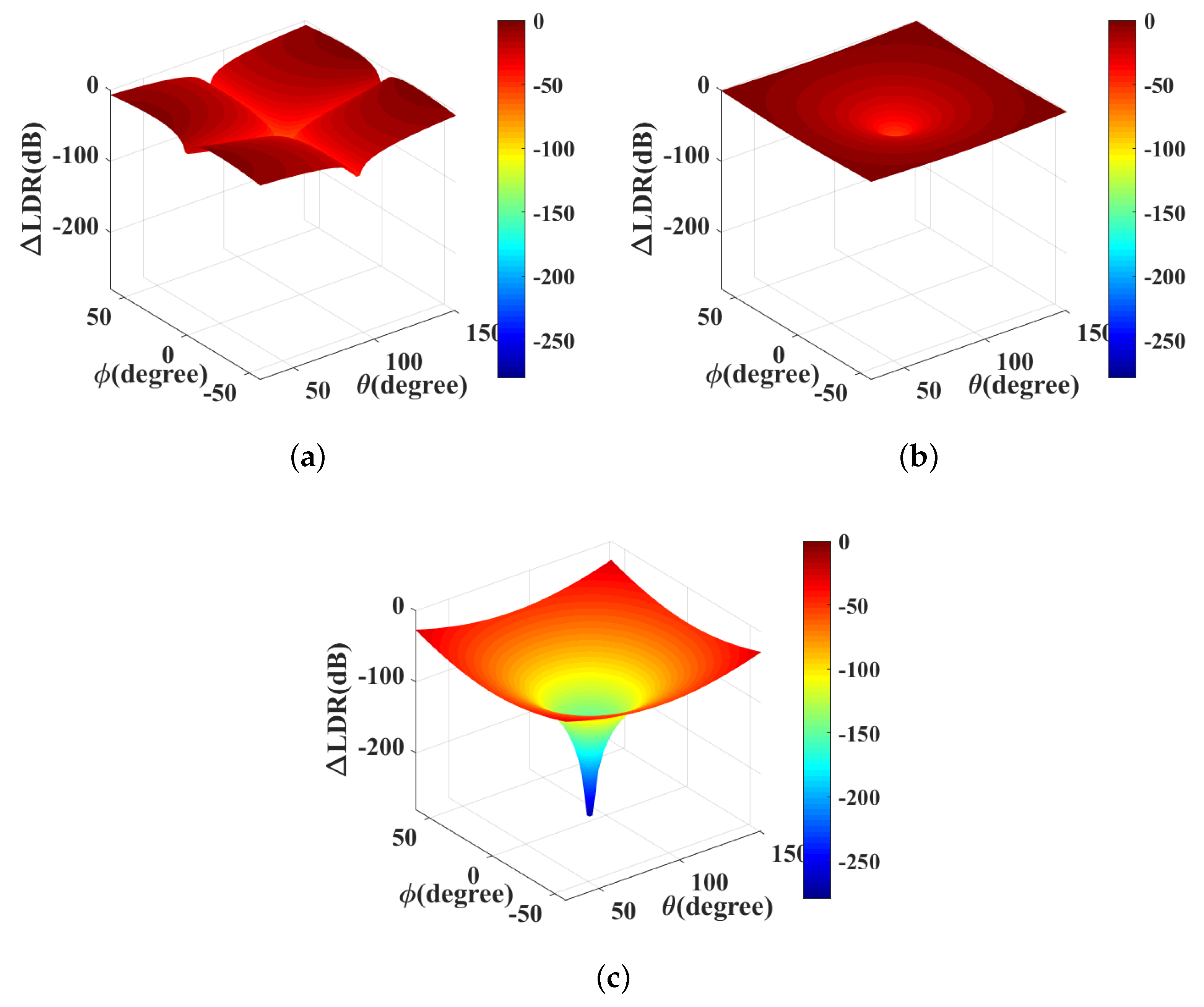