Wearable technology plays a key role in smart healthcare applications. Detection and analysis of the physiological data from wearable devices is an essential process in smart healthcare. Physiological data analysis is performed in fog computing to abridge the excess latency introduced by cloud computing. However, the latency for the emergency health status and overloading in fog environment becomes key challenges for smart healthcare. This paper resolves these problems by presenting a novel tri-fog health architecture for physiological parameter detection. The overall system is built upon three layers as wearable layer, intelligent fog layer, and cloud layer. In the first layer, data from the wearable of patients are subjected to fault detection at personal data assistant (PDA). To eliminate fault data, we present the rapid kernel principal component analysis (RK-PCA) algorithm. Then, the faultless data is validated, whether it is duplicate or not, by the data on-looker node in the second layer. To remove data redundancy, we propose a new fuzzy assisted objective optimization by ratio analysis (FaMOORA) algorithm. To timely predict the user’s health status, we enable the two-level health hidden Markov model (2L-2HMM) that finds the user’s health status from temporal variations in data collected from wearable devices. Finally, the user’s health status is detected in the fog layer with the assist of a hybrid machine learning algorithm, namely SpikQ-Net, based on the three major categories of attributes such as behavioral, biomedical, and environment. Upon the user’s health status, the immediate action is taken by both cloud and fog layers. To ensure lower response time and timely service, we also present an optimal health off procedure with the aid of the multi-objective spotted hyena optimization (MoSHO) algorithm. The health off method allows offloading between overloaded and underloaded fog nodes. The proposed tri-fog health model is validated by a thorough simulation performed in the iFogSim tool. It shows better achievements in latency (reduced up to 3 ms), execution time (reduced up to 1.7 ms), detection accuracy (improved up to 97%), and system stability (improved up to 96%). View Full-Text
Keywords: Tri-Fog Health System; fault data elimination; health status prediction; health status detection; health off Tri-Fog Health System; fault data elimination; health status prediction; health status detection; health off
►▼ Show Figures 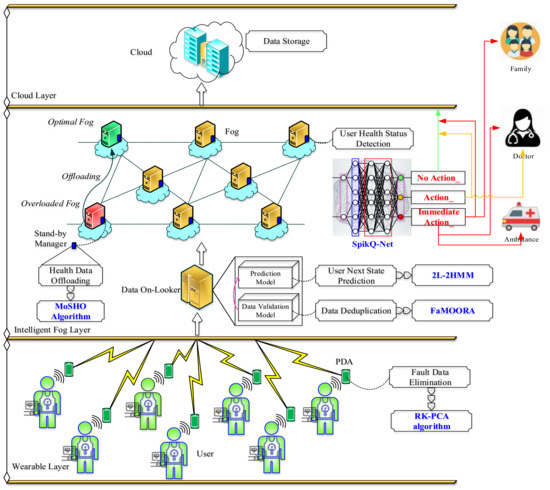