Commercial ICT Smart Solutions for the Elderly: State of the Art and Future Challenges in the Smart Furniture Sector

:
In this paper a GaN-on-Si MMIC Low-Noise Amplifier (LNA) working in the Ka-band is shown. The chosen technology for the design is a 100 nm gate length HEMT provided by OMMIC foundry. Both small-signal and noise models had been previously extracted by the means of an extensive measurement campaign, and were then employed in the design of the presented LNA. The amplifier presents an average noise figure of 2.4 dB, a 30 dB average gain value, and input/output matching higher than 10 dB in the whole 34–37.5 Ghz design band, while non-linear measurements testify a minimum output 1 dB compression point of 23 dBm in the specific 35–36.5 GHz target band. This shows the suitability of the chosen technology for low-noise applications.
Keywords:
low-noise amplifier (LNA); gallium nitride (GaN); GaN/Si; GaN-on-Si; high linearity; HEMT; Ka-band

Gallium arsenide (GaAs) is a material extremely suitable for high-frequency solid-state devices, components, and ICs (Integrated Circuits). The main peculiarities of GaAs-based devices are its high maximum frequency and low-noise behavior, even at frequencies over the Ka-Band [1,2]. As soon as GaAs grew in popularity for RF and microwave applications, silicon-based devices were rapidly replaced because of their much lower frequency limit and higher losses. The peculiar versatility of GaAs allowed the design and realization of different modules with remarkable performances [3,4,5], which could be assembled together, realizing more complex structures such as transmit-receive modules (TRMs). However, the main limitation of GaAs devices has always been the relatively low output power. In applications where high-power signals are exchanged, it is crucial to ensure the survivability of the MMIC (Monolithic Microwave Integrated Circuit) in any operative condition. Therefore, several functionalities needed protection circuits to ensure their correct operation. To provide examples, bulky ferrite circulators were used instead of SPDT (single-pole double-throw) MMIC switches, several HPAs (high-power amplifiers) have to be parallelized in order to satisfy a high power request, and limiter circuits have been frequently placed upstream of LNAs (low-noise amplifiers) to prevent their destruction [6]. This last indispensable solution represents a clear limit of the GaAs technology, thereby increasing the losses, overall dimensions, and noise figure (NF) of the whole structure. Moreover, the mandatory need of this protection arrangements precludes the possibility of integrating several functionalities onto the same MMIC, as it generally happens in a single-chip front-end (SCFE). During the last decade we witnessed an exponential growth of gallium nitride (GaN) devices and MMIC production, with this technology becoming the favorite one in many RF and microwave applications. Indeed, GaN’s main features, such as a wide bandgap, high velocity saturation, and a very high breakdown electric field make it a perfect technology for high-power requirements’ satisfaction. The robustness of GaN devices allows them to tolerate much higher power signals, to the point of improving integrability and broadening the contexts of applications of RF MMIC circuits. GaAs devices maintain anyway an advantage not negligible at very high frequencies, especially regarding the noise behavior [7].
Since GaN HEMTs need other material as substrates, silicon carbide (SiC) has been adopted as the preferred material to the growth of GaN devices, and its performance have been widely shown in literature both for devices [8,9] and designed MMICs [10]. However, SiC wafers’ production is very expensive, given the current difficulty to realize wide diameter wafers, making GaN-on-SiC technologies not suitable to mass industrial production. Furthermore, major manufacturers reside outside the European Union. This represents a serious bottleneck for the growth of European companies, GaN being an enabling technology for crucial RF applications. This situation brought the scientific community to research different materials as substrates for the realization of GaN devices.
In recent years, silicon (Si) has been identified as a suitable alternative to SiC in this context. The development of GaN-on-Si devices could be crucial to obtaining a remarkable reduction in the manufacturing costs, as the production of Si wafers is much cheaper. Moreover, the maturity of Si technology would allow the realization of larger-diameter wafers, with respect to their SiC counterparts. Lastly, the development of GaN-on-Si devices could supply European companies with an enabling technology for space-borne and critical applications, circumventing the necessity to import SiC wafers from other countries. However, the reason why SiC is the preferred substrate material for GaN devices resides in its still superior performance: GaN-on-Si devices, indeed, show lower gain and noise behaviors. This is due to different issues, such as the higher Si losses, a lower Si thermal conductivity compared to the SiC one, and the bigger lattice mismatch GaN has with Si respect to SiC, which brings a higher density of impurities and vacancies in the crystalline structure of the devices [11,12].
Nowadays, GaN-on-Si technology’s evolution allows to obtain performances comparable to GaN-on-SiC devices, as the gap is not such as to discourage its adoption anymore, and robust designed MMICs results have been already presented in literature [13]. For this reason, the EU H2020 project "MiGaNSOS" has been set up, aiming mainly to the qualification of a GaN-on-Si technology, namely, the OMMIC D01GH, which could be employed at industrial level on a wide scale. With this aim, both a custom small-signal and noise model have been extracted and validated, and subquently a LNA has been designed. Presented results shall prove the suitability of this technology to the satisfaction of low-noise and high-power applications requirements, as also shown in a similar work by only simulated performance obtained by the means of a design kit provided by foundry [14].

OMMIC’s D01GH technology consists of an GaN/AlGaN HEMT epitaxially grown on a high resistivity (5 kΩ/cm), 100 µm thick silicon substrate. Channel length is equal to 100 nm, and its main features are reported in Table 1. As we can notice, the technology shows a satisfying maximum usable frequency of 160 GHz with a 1.5 dB NF at 40 GHz. The remarkable performance in terms of power density is confirmed by the 3.3 W/mm RF output power.
The asymmetrical positioning and the mushroom shape of the gate contact was studied to raise the cutoff frequency of the devices, lowering the access resistances. Figure 1 shows a cross-section of the device.
The D01GH process also includes several passive components, such as two MIM capacitors to realize different capacity ranges (50 and 400 pF/mm2), low and high precision resistors (40 and 400 Ω/square), inductors, transmission lines, via-holes, and all interconnecting components useful for a RF design. Models of passive components come in a design kit provided by OMMIC foundry. Figure 2 presents a cross-section of the whole D01GH process.

One of MiGaNSOS project objectives is to model and validate D01GH devices in terms of small signal and noise behavior. Model extraction has been conducted through a measurement campaign carried out on a significant number of devices. In particular, families of devices with 2, 4, 6, and 8 gate fingers 35, 50, 70, and 100 µm wide have been measured. A preliminary DC screening has been conducted in order to identify a subset of devices statistically significant to obtain the most accurate extractable model.
Narrowed down the initial subset of devices, small signal measurements were carried out on the remaining transistors sweeping the VDS from 0 to 12 V and the VGS from −2 to −0.75 V, by making use of a LRRM calibration. Starting from the measurements taken in microstrip configuration, the via holes connected to the sources of the devices were carefully de-embedded by means of electromagnetic (EM) simulations performed in the Sonnet environment, taking account of an eventual coupling between the two vias, too. After choosing the equivalent circuit topology reported in Figure 3, an optimization algorithm was used to interpolate a small signal model scalable with gate width, fixing the number of fingers. This choice was preliminarily made in order to enhance model robustness to device non-uniformities and measurement errors. The model was then validated with a brief comparison of the measurements.
The noise behavior of the D01GH technology was subsequently extracted in the DC-40 GHz frequency range through the common noise-temperature model, with two equivalent thermal noise sources assigned to gate and drain terminals, respectively, as in [15]. Those temperatures were extracted through noise factor (F) measurements performed on a well-matched input termination. This method allows the use of a much simpler measurement bench and easier post-processing, with a strongly reduced total number of measurements for the noise parameters’ determination. The noise measurements were conducted on families of devices with 2, 4, and 6 gate fingers 50, 70, and 100 µm wide. VDS was fixed to 2.5, 5, and 7.5 V, while VGS ranged from −1.5 V to −0.75 V with a step of 0.25 V, accurately avoiding the drain and gate voltage combinations in which power dissipation limits would have been reached. As Figure 4 shows, the extracted model was validated with a brief comparison with the noise measurements carried out at the beginning, confirming the accuracy and the scalability of the model on every family of devices. The measured average NF behavior results were slightly higher than the model prediction. This is a direct consequence of deciding to extract a model not suited to the single geometry, but to whole families.

In this contribution, a low-noise amplifier operating in the Ka-Band designed on a GaN-on-Si technology has been presented. The chosen technology, namely the OMMIC D01GH, was deeply studied, and both small signal and noise parameters models have been extracted and exploited for the circuit design. The MMIC presents an average gain of 31 dB in the whole design band, while showing an average NF of 2.4 dB. A good linearity was proven by the 1 dBcp value measured at 23 dBm, and we expect by simulations a high robustness with the Ig exceeding the foundry suggested limit only with −3 dBm available source power. The chosen technology shows more than satisfying performance and suitability to low-noise, high linearity, and power handling requirements, showing itself as a robust candidate for crucial space-borne applications.

Researchers have received funding from the European Union for project H2020-COMPET-2017 MiGANSOS No. 776322. 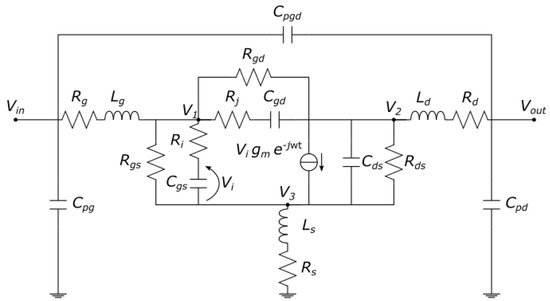 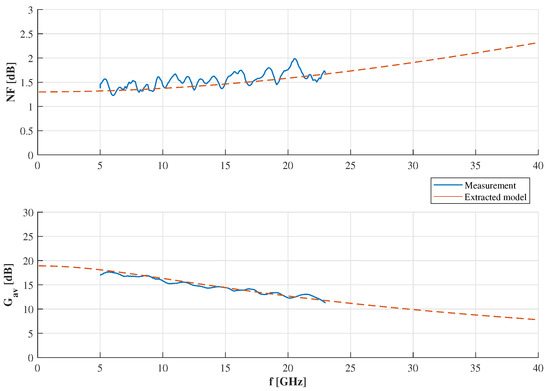 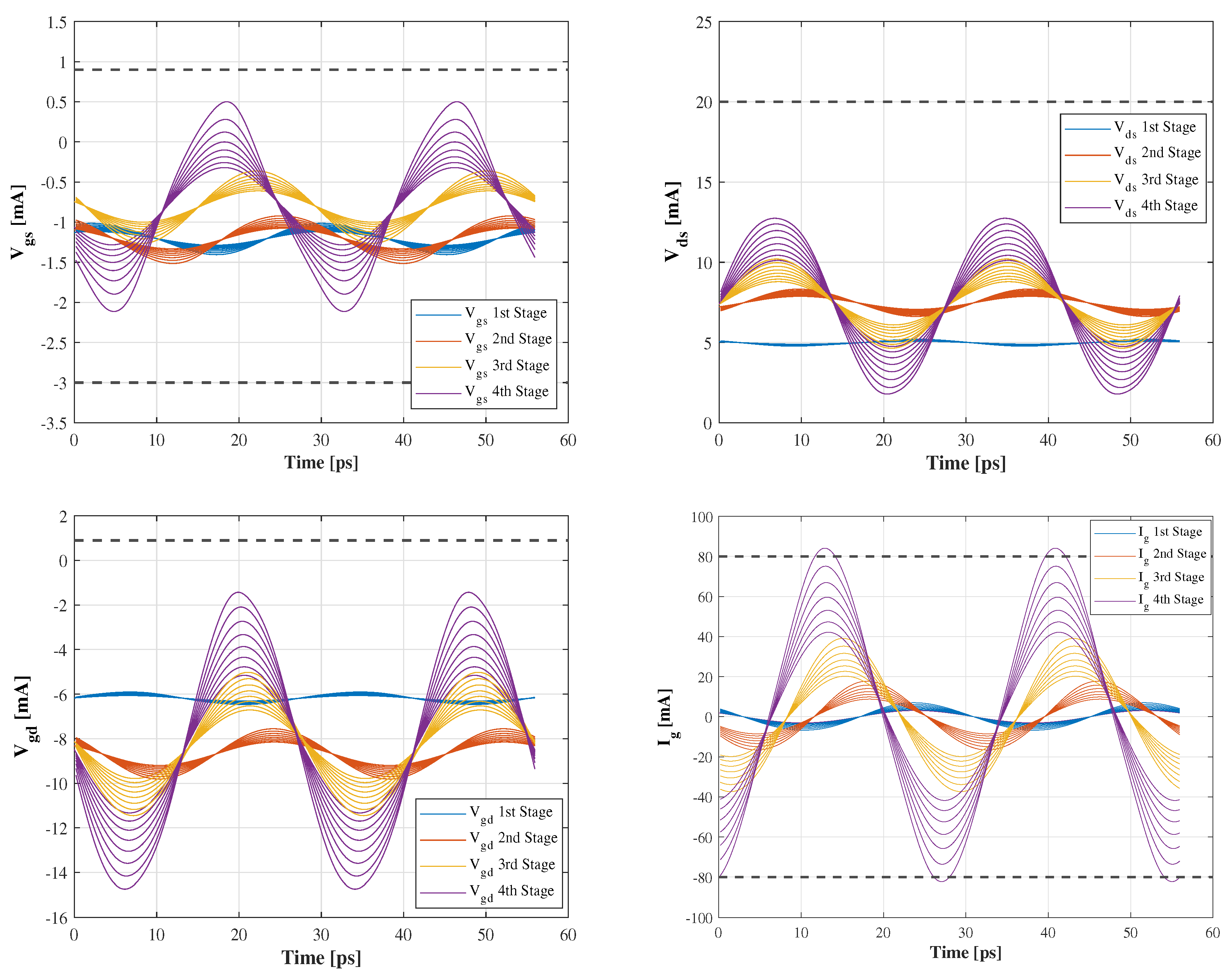 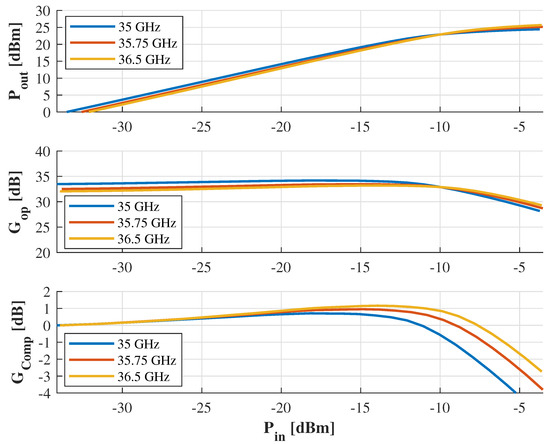 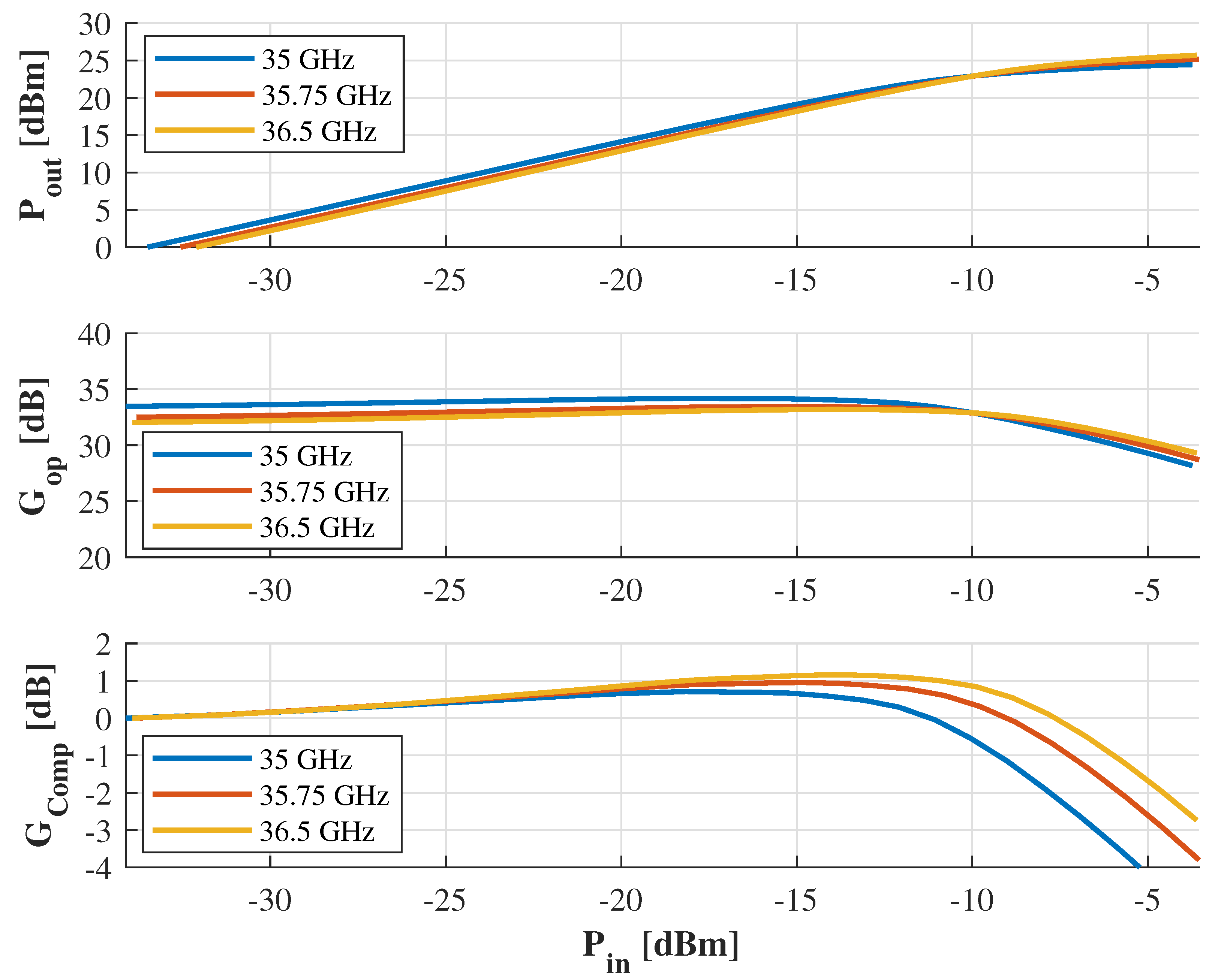 Table 5. Performance comparison with published works.
Table 5. Performance comparison with published works.
© 2020 by the authors. Licensee MDPI, Basel, Switzerland. This article is an open access article distributed under the terms and conditions of the Creative Commons Attribution (CC BY) license (http://creativecommons.org/licenses/by/4.0/).
We use cookies on our website to ensure you get the best experience. Read more about our cookies here.
Accept
We have just recently launched a new version of our website. Help us to further improve by taking part in this short 5 minute survey here. here.
Never show this again