The effects of ultraviolet irradiation on luminescent centres in bismuth-doped (BDF) and bismuth/erbium co-doped (BEDF) optical fibers were examined in this study. The fibers were fabricated by modified chemical vapor deposition combining with atomic layer deposition method. The fibers were exposed to irradiation from a 193 nm pulsed wave argon fluoride laser, and an 830 nm wavelength laser diode pump source was employed for excitation. The experimental results showed that, for the BDF, the transmission loss was slightly reduced and the luminescence intensity was increased at the bismuth-related active aluminum centre (BAC-Al). Then, for the BEDF, the transmission loss was increased a little and the luminescence intensity was also increased at the BAC-Al centre. However, the luminescence intensity was decreased at approximately 1420 nm of the bismuth-related active silica centre (BAC-Si) for all fiber samples. One possible formation mechanism for luminescence intensity changes was probably associated with the valence state transfer of bismuth ions. The other possible mechanism was that the ArF-driven two-photon process caused luminescence changes in BAC-Al and BAC-Si. It was very important to reveal nature of luminescence properties of Bi-doped and Bi/Er co-doped optical fiber.
Keywords: UV irradiation; luminescent centres; bismuth ions; two-photon process UV irradiation; luminescent centres; bismuth ions; two-photon process

Bismuth-doped optical fibers are active laser media that have comprehensive broadband and near-infrared range (NIR) emission, covering approximately 150 nm and having an extended lifetime of approximately 1 ms [1]. By employing the surface-plasma chemical vapor deposition method, Bi-doped infused SiO2 synthesized on silica substrate exhibited photoluminescence (PL) under laser irradiation of 193-nm argon-fluoride (ArF), 337-nm nitrogen and 248-nm krypton-fluoride (KrF). Three PL band peaks (650, 800 and 1400 nm) were observed [2]. By doping small concentration of Bi (0.1 mol %) pulsed lasing and continuous-wave were induced. It was noticed that, increasing the concentration of dopants above this quantity caused significant optical absorption (unsaturated), in the preparation of effective Bi-doped laser, which was not appropriate [3,4]. In high purity fused silica, with radiation-induced modification under a 193-nm pulsed laser irradiation, the stress birefringence and refractive index were observed to increase. The mechanisms were considered related to radiolytic atomic readjustment of the SiO₂ originated by the two-photon absorption [5].
In the boron co-doped germino-silicate fibers, the negative index gratings were noticed capable of functioning approximately 25 years at a temperature 300 °C without significant degradation [6]. The photo-induced decline in the absorption and emission bands of BACs under 244-nm radiation was recently revealed. It was confirmed that the degradation of BACs was a result of the photoionization of oxygen-deficient centres (ODC) [7]. Evidently, some of the experiments allowed the creation of the bismuth-related active centres (BACs), whereas unsaturated absorption-related centres are yet to be revealed. Hence, the characteristics of the active centres are significant problems that have to be understood. Their solutions would create means for enhancing the laser features of Bi-doped fibers [8]. Photo darkening in highly ytterbium-doped alumino-silicate and phosphor-silicate fibers, under a 488-nm irradiation, was presented. Both irradiation-induced excess loss and post-irradiation temporal loss evaluations revealed that the Yb-doped phosphor-silicate fiber is highly resistant to photodarkening [9]. It was observed that, Bi-doped high-germania-silica fibers had the most noticeable bleaching, whereas BACs in alumino-silicate fibers exhibited high level of stability against laser radiation [10]. The red luminescence photo activation in Bi-doped glass is because of its irradiation by femtosecond laser pulses [11]. Significant efforts have been made to understand the structure of the color centres and identify electronic transitions responsible for the infrared luminescence in the glass [12].
In this study, UV irradiation effects on luminescent centres in BDF and BEDF were investigated and new data pertaining to physical mechanism of these phenomena were collected. Further by acquiring the luminescence intensity and transmission spectra of the irradiated fiber samples, the rate of irradiation cycle and recovery phases in different time intervals were investigated. The aforementioned are of potential interest in understanding the nature of luminescence properties in Bi-doped and Bi/Er co-doped silica optical fibers. In Section 2, we describe the experimental setup, which consists of the fiber samples and equipment, as well as experimental parameters. In the experiment’s methodology, we have specified the configuration for the irradiation effect measurement and experimental conditions. In Section 3, experimental results on transmission spectra of BDF and BEDF before and after irradiation and secondary luminescence spectra of BDF and BEDF before and after irradiation are presented. In Section 4, the paper is concluded with the discussion of the results of our study on UV irradiation effects on luminescent centres in Bi-doped and Bi/Er co-doped optical fibers.

2.1. Description of the Fibers and Equipment

The BDF and BEDF fibers were fabricated by modified chemical vapor deposition (MCVD) method combined with atomic layer deposition (ALD) method. The fiber samples were 8 cm in length, the preform material composition was measured by an electron probe micro-analyzer (JEOL JXA-8100, University of Lille 1, France). For the Bi-doped fiber, the elements Si, Ge, O, Bi and Al had mass ratio (wt.%) of 34.4, 19.0, 46.2, 0.15, and 0.05, respectively. In the core, the concentration of bismuth and erbium in Bi/Er co-doped fiber was approximately 200 ppm and 1200 ppm in the cladding layer region. A small quantity of Al was co-doped with the Bi/Er co-doped fiber to increase the activities of bismuth and the erbium ion. Its concentration was practically 100 ppm [13,14,15]. Originally, the laser beam power was measured to be 60 mW. However, after reaching the laser beam expander at the irradiation region, the power was 35 mW. The laser beam was 2.5 cm in length and 1.4 cm in width. It was enlarged using a laser beam expander. The output power of the pump source 830-nm laser diode was 25 mW. A 1310-nm coupler was employed as connector. An, ArF excimer laser with a 193-nm operating wavelength was used for irradiating the fiber samples, and an optical spectrum analyzer (Yokogawa, AQ-6315A, Tokyo, Iapan) was used to measure luminescence and transmission spectra.

While observing the effects of pulsed wave UV irradiation on BDF and BEDF optical fibers, the luminescence spectra were tested by a backward pump system excited by pump source operating at 830-nm. The transmission spectra were tested by the cut-back technique employing a white light (Yokogawa, AQ4306, Tokyo, Japan) source and measurements were performed at room temperature. The luminescence and transmission intensities of the fiber samples were measured before exposure to UV irradiation. After irradiation of the fiber samples at different time intervals, the measured intensities were analyzed in comparison with those measured before the irradiation process. A series of experiments were performed to understand UV irradiation effects on luminescent centres in Bi-doped and Bi/Er co-doped optical fibers. The laser emitted photon energy of 4.43–12.4 eV and 0.710–1.987 aJ with a relative power of 60 mW. The power of laser diodes was chosen to achieve a uniform population inversion of BACs along the active fiber length, thus, luminescence was collected from the whole length of the tested sample. As for the luminescence spectra measurement, the system was designed in a manner that the 830-nm pump was connected to 1310-nm coupler and to OSA. The fiber under test (FUT) is connected to 1310-coupler on the other end and set horizontally to the laser beam by removing the polymer coating over the fiber samples, as shown in Figure 1a. For the measurement of transmission spectra, the fiber was connected to a white light source on one end and OSA to the other end, via pigtail connector, with FUT aligned horizontally with the laser beam for irradiation, as shown in Figure 1b.

3. Results and the Discussions

3.1. Transmission Spectra of BDF and BEDF Before and After UV Irradiation

The measured irradiation-induced transmission changes with the 35-mW laser power, the slight broadening of transmission intensity in BDF, and the enhanced characteristic bands in BAC-Al, as shown in Figure 2a, were all related to typical electronic transitions of bismuth ions.
In near-infrared and visible regions, a substantial variation in transmission was observed. Variations in transmission after irradiation of the fibers were because of structural modifications, which resulted from the damage or defects in glass. It can be assumed that photobleaching occurred in the region. In addition, it can also be assumed that photodarkening occurred in BAC-Si, where the intensity decreased after exposure to irradiation.
The mechanism for varying intensities indicated that photobleaching process influenced saturation at a slower rate than by the photodarkening rate, although its basis was not evident. The transmission loss reduced by about 0.24 dB with only 2.5 cm in fiber length (equivalent to 9.7 dB/m) at near-infrared region with the UV laser of 35 mW for 60 s. However, Figure 2b describes the variation of the optical transmittance intensity of BEDF in a region within the proximity 850 nm band as a function of the irradiation time. A considerable variation in transmission can be observed in that region, which indicated that there was no significant change in first excitation and ground states. However, the excitation of the state of bismuth ion population occurred after UV irradiation. The experimental evidence obtained after irradiation indicated that photobleaching was not involved to the first excitation, and the ground state transition of bismuth ions contributed to the creation of bismuth active centres. It was possible that the ground state of bismuth ion population changes, which contributed to the creation of BAC, was influenced by the irradiation [16].

3.2. Luminescence Spectra of BDF and BEDF Before and After UV Irradiation

The Bi-doped and Bi/Er co-doped optical fibers were fabricated by MCVD combined with ALD method. This study revealed a significant property of UV irradiation effects on luminescent centres in the optical fiber samples. At first, the transmission loss was slightly reduced by 0.24 dB in Bi-doped fibers at 1200 nm and the transmission loss of the Bi/Er co-doped fibers was increased a little. Then, the luminescence intensity was increased by 0.6 dB of the Bi-doped fibers and by 1.53 dB of Bi/Er co-doped fibers at ~1100 nm (BAC-Al) with UV laser irradiation treatment. In the meantime, the luminescence intensity was decreased at ~1420 nm (BAC-Si) of all fiber samples. In addition, an energy level diagram was constructed for BAC-Al and BAC-Si centres. It is very important to further understand the different processes of luminescence. The change mechanism for luminescence intensity was probably ascribed to valence state transfer of bismuth ions at the ~1100 nm band. And at ~1420 nm band, the mechanism was probably associated with the loss of an excited electron and ArF-driven two-photon process. These aided in understanding the nature of luminescence properties in Bi-doped and Bi/Er co-doped silica optical fibers. In the future, we will further investigate the relationship between active centres and valence states.

R.U. conceived the presented idea, carried out the experiments and conducted the analysis. J.W. was in charge of direction and planning. T.H. assisted in the sample preparation and performing the experiments, F.P. and Z.C. provided critical feedbacks during the research and T.W. supervised the overall project. 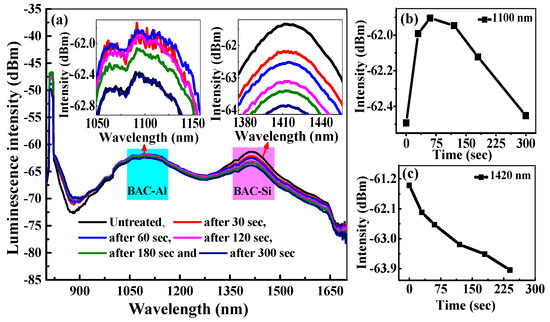 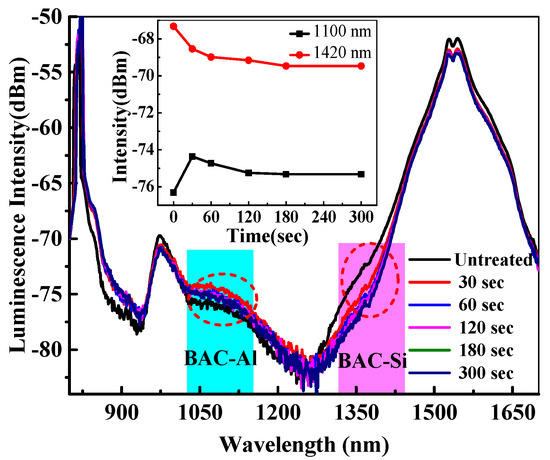 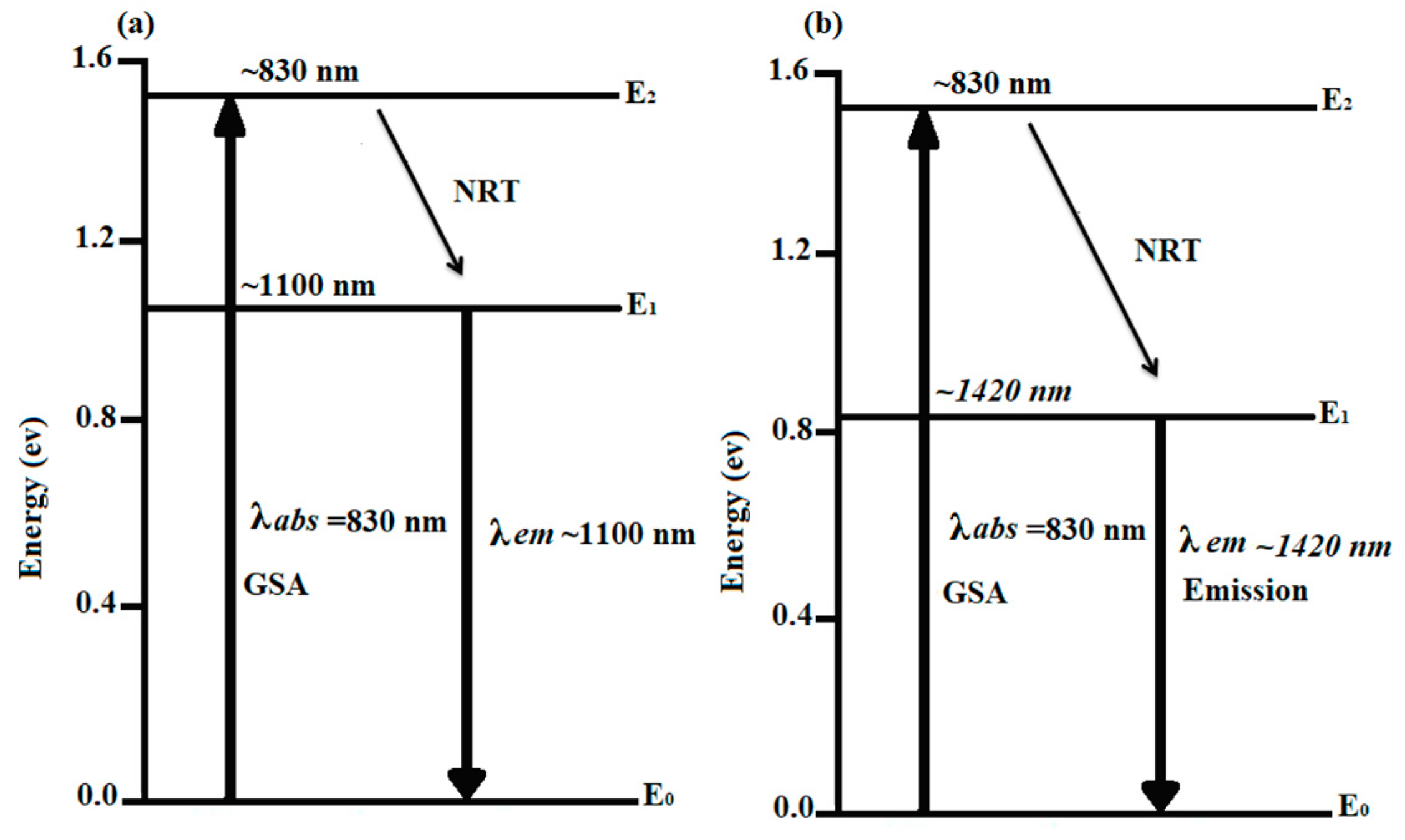