The structural, energetic, and electronic properties of single-layer graphene doped with boron and nitrogen atoms with varying doping concentrations and configurations have been investigated here via first-principles density functional theory calculations. It was found that the band gap increases with an increase in doping concentration, whereas the energetic stability of the doped systems decreases with an increase in doping concentration. It was observed that both the band gaps and the cohesive energies also depend on the atomic configurations considered for the substitutional dopants. Stability was found to be higher in N-doped graphene systems as compared to B-doped graphene systems. The electronic structures of B- and N-doped graphene systems were also found to be strongly influenced by the positioning of the dopant atoms in the graphene lattice. The systems with dopant atoms at alternate sublattices have been found to have the lowest cohesive energies and therefore form the most stable structures. These results indicate an ability to adjust the band gap as required using B and N atoms according to the choice of the supercell, i.e., the doping density and substitutional dopant sites, which could be useful in the design of graphene-based electronic and optical devices. View Full-Text
Keywords: structural; energetic; electronic; density functional theory; band gap; stability; doped graphene; cohesive energies structural; energetic; electronic; density functional theory; band gap; stability; doped graphene; cohesive energies
►▼ Show Figures 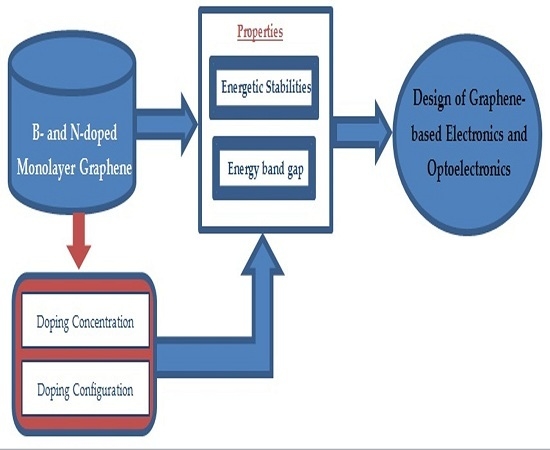