This article presents a data-startable baseband logic featuring a gated oscillator clock and data recovery (GO-CDR) circuit for nanowatt wake-up and data receivers (WuRxs). At each data transition, the phase misalignment between the data coming from the analog front-end (AFE) and the clock is cleared by the GO-CDR circuit, thus allowing the reception of long data streams. Any free-running frequency mismatch between the GO and the bitrate does not limit the number of receivable bits, but only the maximum number of equal consecutive bits (Nm). To overcome this limitation, the proposed system includes a frequency calibration circuit, which reduces the frequency mismatch to ±0.5%, thus enabling the WuRx to be used with different encoding techniques up to Nm = 100. A full WuRx prototype, including an always-on clockless AFE operating in subthreshold, was fabricated with STMicroelectronics 90 nm BCD technology. The WuRx is supplied with 0.6 V, and the power consumption, excluding the calibration circuit, is 12.8 nW during the rest state and 17 nW at a 1 kbps data rate. With a 1 kbps On-Off Keying (OOK) modulated input and −35 dBm of input RF power after the input matching network (IMN), a 10−3 missed detection rate with a 0 bit error tolerance is measured, transmitting 63 bit packets with the Nm ranging from 1 to 63. The total sensitivity, including the estimated IMN gain at 100 MHz and 433 MHz, is −59.8 dBm and −52.3 dBm, respectively. In comparison with an ideal CDR, the degradation of the sensitivity due to the GO-CDR is 1.25 dBm. False alarm rate measurements lasting 24 h revealed zero overall false wake-ups. View Full-Text
Keywords: clock and data recovery (CDR); Internet of things (IoT); nanowatt data receiver; ultra-low-power; wake-up receiver (WuRx) clock and data recovery (CDR); Internet of things (IoT); nanowatt data receiver; ultra-low-power; wake-up receiver (WuRx)
►▼ Show Figures 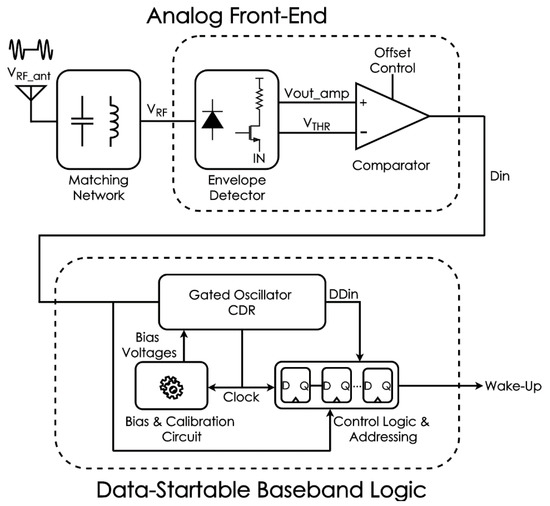 Matteo D’Addato
Matteo D’Addato received a master's degree in electronic engineering from the University of Bologna in Bologna, Italy in 2019. He is currently pursuing a Ph.D. at ARCES in Bologna. His research interests include the design of ultra-low-power analog and digital integrated circuits, clock and data recovery architectures and RF circuits.

Alessia M. Elgani
Alessia M. Elgani received an M.Sc. in microelectronics from the University of Pavia in Italy in 2016. Over the course of 2016 and 2017, she carried out internships at Texas Instruments and ETH in Milan, Italy and Zuerich, Switzerland, respectively. Ms. Elgani is currently pursuing a Ph.D. at ARCES in Bologna, Italy, and her main research interests include low-power analog circuitry for the IoT.

Eleonora Franchi Scarselli
Eleonora Franchi Scarselli (M’98) received an M.S. degree in electrical engineering and a Ph.D. degree in electrical engineering and computer science from the University of Bologna in Bologna, Italy in 1992. From 1994 to 2004, she was a research assistant with the Faculty of Engineering at the University of Bologna, where she has been an associate professor since 2005 and is currently teaching the design of digital integrated circuits. She is a member of the scientific committee of the joint STMicroelectronics-ARCES Laboratory. Her main research activities are in the field of embedded reconfigurable devices and architecture and circuits for low-power sensing and actuating IoT nodes.

Antonio Gnudi
Antonio Gnudi received a laurea degree in electrical engineering and a Ph.D. degree in electrical engineering and computer science from the University of Bologna in 1983 and 1989, respectively. From 1989 to 1990, he was a visiting scientist at the IBM T.J. Watson Research Center, NY, USA. Since 1998, he has been an associate professor of electronics at the University of Bologna. His current research interests concern modeling and the numerical simulation of nanometer-size post-CMOS devices by means of semi-classical and full-quantum transport approaches, as well as the design of analog CMOS circuits for RF applications.

Giulio Ricotti
Giulio Ricotti was born in 1969 in Broni (PV) Italy. In 1993, he entered STMicroelectronics for his thesis and obtained a degree in electronic engineering at the University of Pavia, with specialization in telecommunications. On January 1994, he was hired by STMicroelectronics in the smart power (SP) products group as an analog and power designer. He is a certificate teacher at the ST Teaching Club, managing three technical courses. Currently, he is a design director and technical fellow in Research & Development for Smart Power Technology. He is the author of more than 40 patents and 40 papers. On June 8, 2009, he received the Premio dei Premi award for innovation from the President of the Italian Republic Giorgio Napolitano in Rome as recognition for a project in four-dimension medical echography.
Zoom | Orient | As Lines | As Sticks | As Cartoon | As Surface | Previous Scene | Next Scene
We use cookies on our website to ensure you get the best experience. Read more about our cookies here.
Accept
We have just recently launched a new version of our website. Help us to further improve by taking part in this short 5 minute survey here. here.
Never show this again