Toward a Scalable Fabrication of Perovskite Solar Cells under Fully Ambient Air Atmosphere: From Spin-Coating to Inkjet-Printing of Perovskite Absorbent Layer

Electrochromism is the ability of a material to selectively change its coloration under the influence of an external electric current/potential and maintain it even after the power source has been disconnected. Devices that use such a mechanism are known as electrochromic devices (ECDs). Over the years, significant effort has been invested into the development of flexible ECDs. Such electrochromic tapes or fibers can be used as smart textiles. Recently, we utilized a novel geometrical approach in assembling electrochromic tapes which does not require the use of optically transparent electrodes. The so-called inverted sandwich ECD configuration can employ various color-changing mechanisms, e.g., intercalation, redox reactions of electrolytes or reactions on electrode surfaces. One of the most frequently used electrochromic metal oxides is WO3. However, other metal oxides with different coloration responses also exist. In this paper, we explore the use of V2O5 and TiO2 in metal-tape-based ECDs in the inverted sandwich configuration and compare their performance with WO3-based devices. Morphological features of metal oxide thin layers were investigated with scanning electron microscopy (SEM), and the performance of the tapes was investigated electrochemically and spectroscopically. We demonstrate that well-established preparation techniques (e.g., sol–gel synthesis) along with coating approaches (e.g., dipping) are adequate to prepare optically nontransparent fiber electrodes. Depending on the metal oxide, flexible electrochromic fiber devices exhibiting different coloration patterns can be assembled. Devices with TiO2 showed little coloration response, while much better performance was achieved in the case of V2O5 and WO3 ECDs. View Full-Text
Keywords: electrochromism; thin film; metal oxide; intercalation; inverted sandwich; stainless steel electrochromism; thin film; metal oxide; intercalation; inverted sandwich; stainless steel
►▼ Show Figures 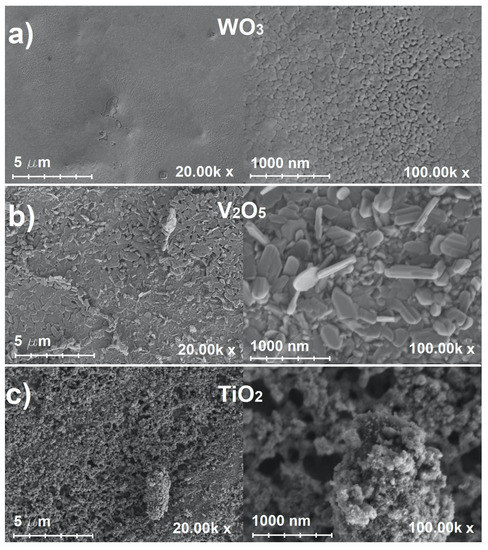