Applications of Natural, Semi-Synthetic, and Synthetic Polymers in Cosmetic Formulations

Cosmetics composed of synthetic and/or semi-synthetic polymers, associated or not with natural polymers, exhibit a dashing design, with thermal and chemo-sensitive properties. Cosmetic polymers are also used for the preparation of nanoparticles for the delivery of, e.g., fragrances, with the purpose to modify their release profile and also reducing the risk of evaporation. Besides, other cosmetically active nutrients, dermal permeation enhancers, have also been loaded into nanoparticles to improve their bioactivities on the skin. The use of natural polymers in cosmetic formulations is of particular relevance because of their biocompatible, safe, and eco-friendly character. These formulations are highly attractive and marketable to consumers, and are suitable for a plethora of applications, including make-up, skin, and hair care, and as modifiers and stabilizers. In this review, natural synthetic, semi-synthetic, and synthetic polymers are discussed considering their properties for cosmetic applications. Their uses in conventional and novel formulations are also presented.
Keywords: cosmetic; dashing design; polymers; co-polymers; polysaccharides cosmetic; dashing design; polymers; co-polymers; polysaccharides

In the 21st century, cosmetic and personal care industries have been increasing rapidly. The global cosmetics market is projected to register a compound annual growth rate of 4.3% during the forecast period (2016–2022) and is anticipated to reach $429.8 billion by 2022 [1].
The European Commission (2015) has defined cosmetics as any substance or preparation intended to be placed in contact with the various external parts of the human body (epidermis, lips, external genital organs, hair system, and nails), teeth, and the mucous membranes of the oral cavity [2]. Indeed, polymers are found in hair products, such as shampoo, conditioner, tip repair, hair dye, moisturizing masks, and fixing gels; in skincare products, such as liquid soaps, moisturizing lotions, sunscreen, and corporate oils; as well as products used in nail care, make-up, and fragrance [3]. Each of these products has distinct functions and applicability, in addition to different characteristics in the composition, manufacturing process, and physical and chemical parameters that demand a great diversity of polymers.
Polymers are an important class of raw materials of cosmetic formulations, being essential in the production of high-performance products. They are classified as synthetic, semi-synthetic, or natural (Figure 1) macromolecules composed of many repeating units (monomers) usually arranged in the form of a chain. In cosmetics formulations, its structural diversity is used to promote a variety of functions as rheology modifiers, thickeners, foam stabilizers and destabilizers, emulsifiers, fixatives, conditioning, and film formers [3,4,5].
In this review, we discuss the properties and uses of natural, semi-synthetic, and synthetic polymers in cosmetic formulations.

An overview of the publications about polymers applied in cosmetics was carried out from a search for publications in the Web of Science database by Clarivate Analytics. This search was limited to the last 20 years (from 2000 to 2019), and considering only original works. Initially, we searched for the word “cosmetics” in the title of the papers to ensure that only cosmetics-driven works were considered. The term “cosmetics” was found in 4485 papers. The results were then refined by directly searching for different polymers, i.e., each polymer name was searched in these 4485 articles, not only in the title but in any search field. The “*” was used as a wildcard to find inflections and distinct ways of referring to the same polymer.
The results are presented in Figure 2, resulting in three distinct groups of polymers classified as: Natural polymers (plant or animal origins), semi-synthetic polymers (chemically modified natural polymers—from plant or animal origins), and synthetic polymers (fermentation or chemical routes). All the polymers (natural, semi-synthetic, and synthetic) were found in 219 papers.

Synthetic polymers are attractive as an excipient for cosmetics formulation as they can be tailored for specific applications. They are often cheaper than natural polymers, can be produced on a large scale with uniformity, and have a long shelf time. The synthetic polymers most commonly found in cosmetics are acrylic acid-based polymers, polyacrylamides, silicon, and alkylene oxide-based homopolymers and copolymers [6].
Over the last years, silicon materials have been used in the cosmetics industry. Silicon and its composites (e.g., biomethane and cyclomethycaine) are used in cosmetics, such as deodorants, shampoos, antiperspirants, and lotions as suspending agents and processes, such as emulsification and associative thickening [4].
Polyethylene glycols (PEGs), and their anionic or non-ionic derivatives, are widely used in cosmetics as emollients (which help with softening and lubricating of the skin), as emulsifiers (which help water-based and oil-based ingredients to mix properly), and as penetration enhancers that help the delivery of other ingredients deeper into the skin. They are used in bath products, shaving products, skin care products, make-up, skin cleansing products, shampoo, hair conditioners, and deodorant [23]. Poomanee et al. (2020) developed nanoemulsion loadings with Mangifera indica L. kernel extract to enhance the stability and skin permeation of the extract to be a promising anti-acne product [24]. The mixture was composed of safflower oil as the oil phase, PEG-7 glyceryl cocoate, the surfactant mixture of Ceteareth-20, PEG-40 hydrogenated castor oil, and sorbitan oleate along with butylated hydroxytoluene. A nanoemulsion with very small droplet sizes and a narrow distribution, was obtained, depicting the physicochemical and antibacterial stability, as well as the skin permeability, of M. indica kernel extract.
Aliphatic polyesters, such as poly (lactic acid) (PLA), poly (ε caprolactone) (PCL), and poly(3-hydroxybutyrate-co-3 hydroxy valerate), have excellent properties of biodegradability, biocompatibility, and mass producibility. These materials have melted processability and excellent mechanical properties, properties that are not found in natural polymers (such as in cellulose, chitin, and gelatin). Due to their properties, aliphatic polyesters are receiving attention for the production of microbeads for sustainable cosmetics [9].

4. Overview of Polymers Applied to Cosmetics

Natural, semi-synthetic, synthetic, and other modified derivative polymers exhibit different physicochemical and biopharmaceutical properties that can be exploited for use in skin, dental, hair, and nail care. Moreover, they have optimal properties to support active compounds for the cosmetic industry. These valuable characteristics are consistently related, and therefore an accurate polymer characterization is needed to determine which characteristics are more relevant for a specific application. The multi-functional behavior of polymers implies that each one must be characterized not only in terms of its physical-chemical properties but also in terms of biopharmaceutical activity, functional properties, and biological and environmental safety. 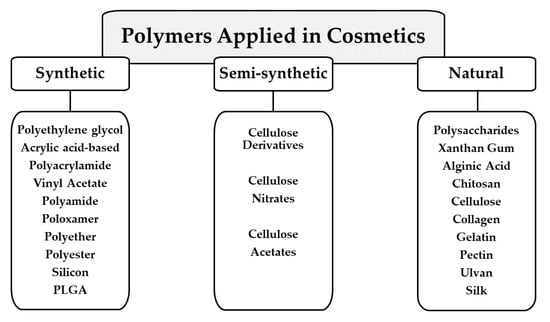 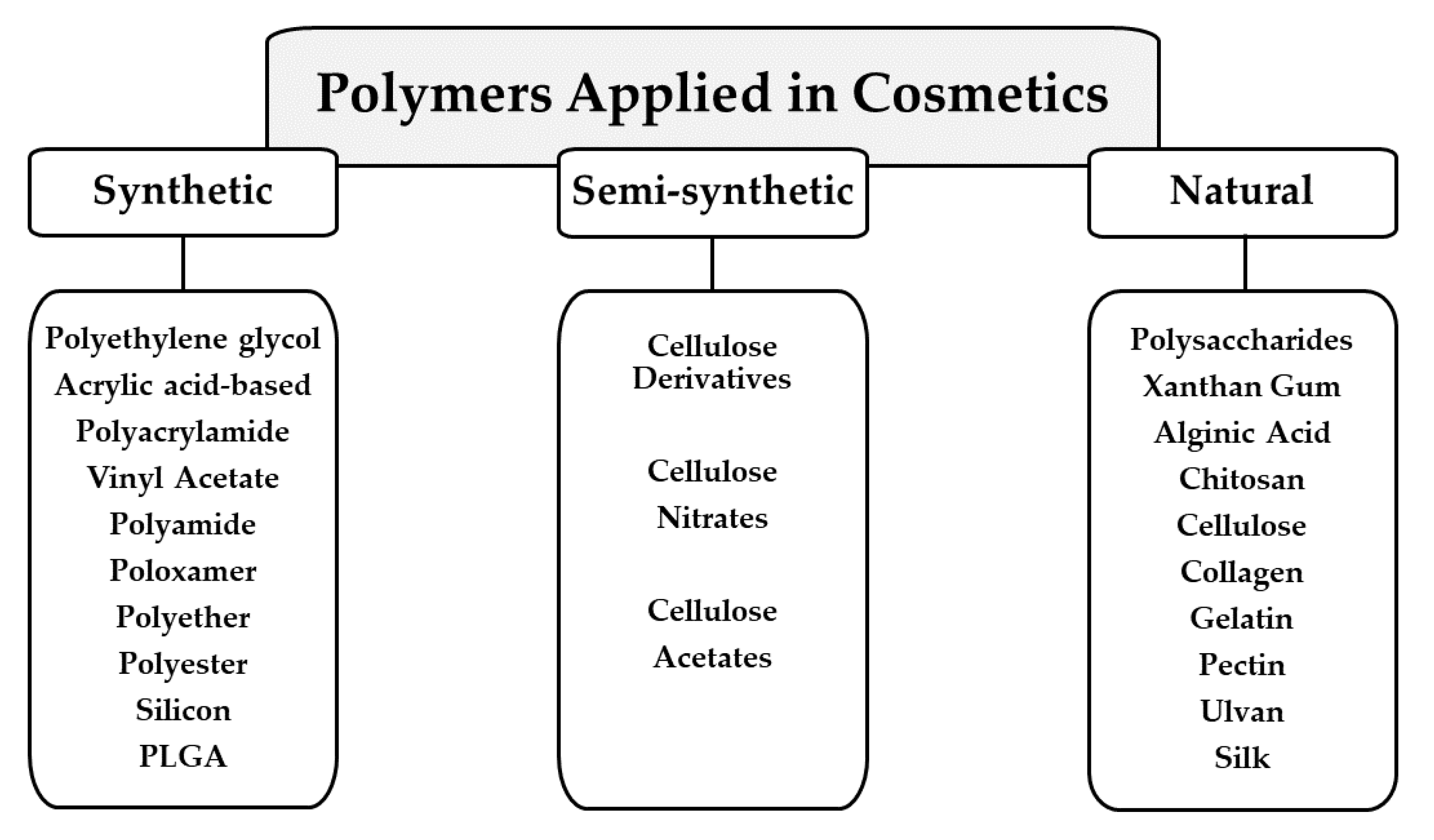 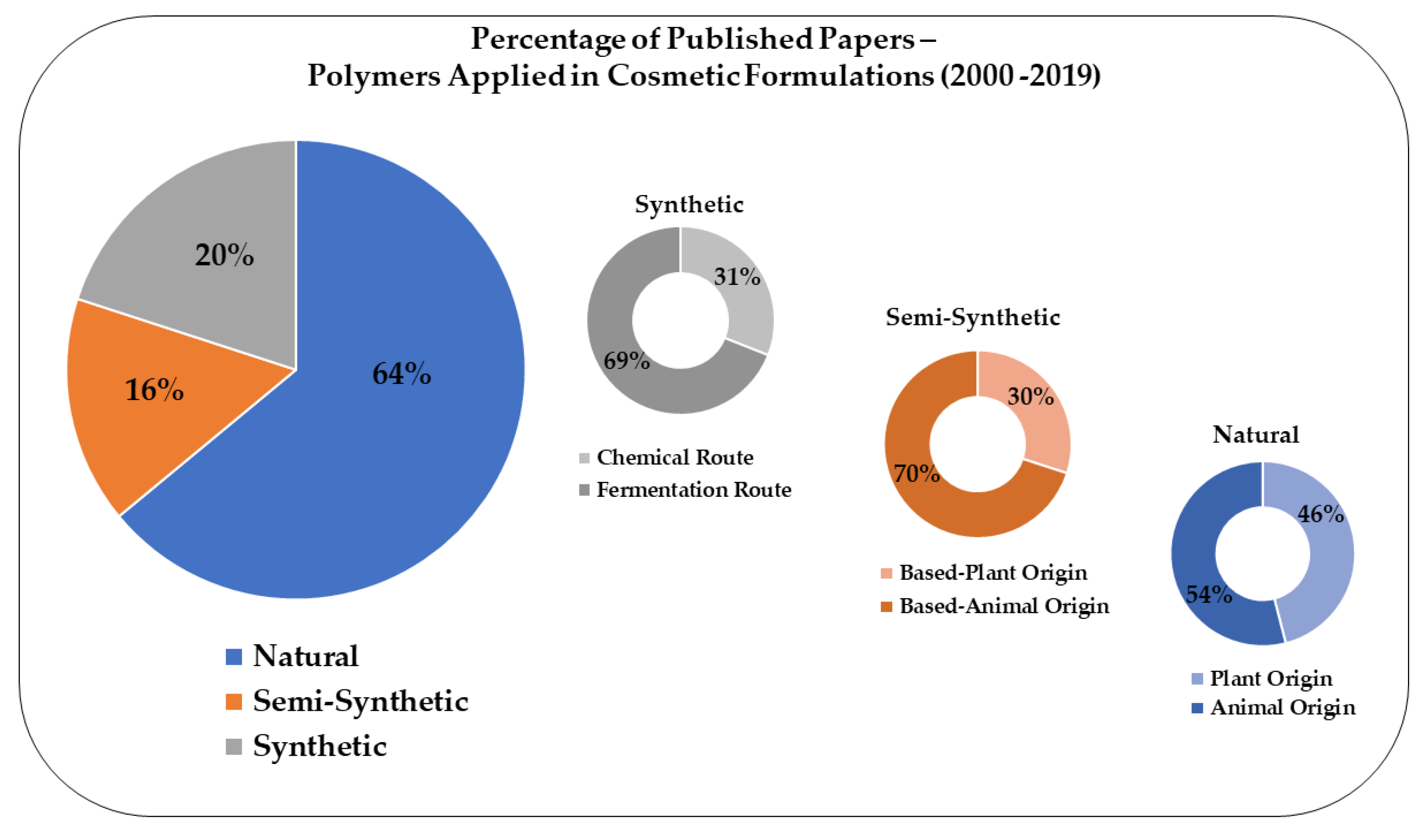 Table 1. Functional properties of polymers applied to cosmetics.
Table 1. Functional properties of polymers applied to cosmetics.
© 2020 by the authors. Licensee MDPI, Basel, Switzerland. This article is an open access article distributed under the terms and conditions of the Creative Commons Attribution (CC BY) license (http://creativecommons.org/licenses/by/4.0/).
We use cookies on our website to ensure you get the best experience. Read more about our cookies here.
Accept
We have just recently launched a new version of our website. Help us to further improve by taking part in this short 5 minute survey here. here.
Never show this again