Alternative Methods to Animal Testing for the Safety Evaluation of Cosmetic Ingredients: An Overview
Next Article in Special Issue

Safety and Efficacy of Dextran-Rosmarinic Acid Conjugates as Innovative Polymeric Antioxidants in Skin Whitening: What Is the Evidence?
Previous Article in Special Issue

Evaluation of the Effect of Plant Mixture Ethanol Extracts Containing Biota orientalis L. Extract on Suppression of Sebum in Cultured Sebocytes and on Stimulation of Growth of Keratinocytes Co-cultured with Hair Papilla Cells

Biota orientalis L. leaf extract (BOLE) is used medically to improve strength and arrest hemorrhage. In China, BOLE has been used in traditional medicine for its antibacterial properties and for hair restoration. In this study, we investigated the mechanism of hair restoration by BOLE from the point of view of the sebum suppressant effect and hair loss prevention. BOLE at 25 or 50 μg/mL final concentrations, a hair growth plant ethanol extract (HGPEE), and a hair growth plant water extract (HGPWE) (the latter two each containing BOLE and other plant compounds), were used to study: (1) the sebum suppressant effect in sebocytes from normal golden hamster ear pinna origin; (2) the effect on the growth of human fetal epidermal keratinocytes; and (3) the effect on gene expression related to hair growth stimulation, with (2) and (3) studied in human fetal epidermal keratinocytes and hair papilla cells. BOLE had a sebum depletion effect in cultured sebocytes; moreover, the amounts of mRNA of the hair growth factors, KGF, VEGF, and G3PDH analyzed by real-time polymerase chain reaction in human hair papilla cells were increased by HGPEE. The amount of mRNA of Wnt10b in cultured epidermal keratinocytes was increased by the addition of BOLE, and the growth of the cultured epidermal keratinocytes was promoted by HGPEE in a two-layer culture system of hair papilla cells and epidermal keratinocytes. HGPEE had a hair growth promotion/hair restoration effect and a sebum suppression effect. Hair restorers containing HGPEE may be useful for stimulating hair growth and suppressing excess scalp sebum in males and females. View Full-Text
Keywords: Biota orientalis; Platycladus orientalis; Thuja orientalis; sebocytes; scalp sebum; hair growth Biota orientalis; Platycladus orientalis; Thuja orientalis; sebocytes; scalp sebum; hair growth
►▼ Show Figures 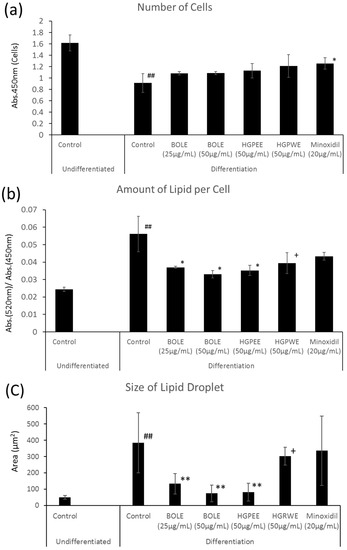