Meta Analysis of Skin Microbiome: New Link between Skin Microbiota Diversity and Skin Health with Proposal to Use This as a Future Mechanism to Determine Whether Cosmetic Products Damage the Skin
Previous Article in Journal

Medicinal plants are sources of various nutrients and also have therapeutic values, therefore they can be used to synthesize and develop drugs [1]. The medicinal importance of plants is dependent on their phytochemical constituents like alkaloids, phenolics, flavonoids, tannins, saponins, and essential oils [2].
Phoenix dactylifera L., commonly known as date palm, belongs to the Arecaceae family and its fruit (dates) has been used in folk medicines for many heart diseases and also for antifungal and antibacterial purposes [3]. They are a rich source of sugars (glucose and fructose), vitamins (A, C, and B complex), fibers, minerals, and phenolic compounds having potent antioxidant activity [4]. There are almost 35 countries worldwide which produce dates and their composition varies according to the variety and degree of ripening [5].
Phoenix dactylifera L. consists of polyphenols like cinnamic acid and their derivatives in which ρ coumaric acid, ferulic acid, and sinapic acids are major compounds [6]. The darker color variety of the date fruit has a higher concentration of polyphenols compared to the lighter variety [4]. The date palm kernel contains phytohormones; thus, it produces a significant anti-wrinkle effect and can be used in antiaging products [7]. Date fruits are rich in phenolics and also possess antioxidant activity. Date seeds can also be used in skin products, as they can yield a moisturizing oil with different essential fatty acids [8].
The aim of the present study was to formulate a stable emulsion containing the Phoenix dactylifera L. extract and to evaluate its effect on different skin parameters like melanin, erythema, hydration, sebum, and elasticity. The effects produced by this cream were compared with the effects produced by a base without Phoenix dactylifera L. extract.

2.2.1. Extraction of the Plant Material

The extract was taken by soaking the 100 g of chopped fruit in 900 mL of 80% methanol for 24 h. Then the sample was stirred for 15 min and then filtered first through eight layers of muslin cloth and then through Whatman filter paper #01. Afterwards, the dark yellowish colored extract was obtained by evaporating the filtrate to one-third of the initial volume at 40 °C under reduced pressure by using a rotary vacuum evaporator.

Antioxidant activity (free radical scavenging activity) of Phoenix dactylifera L. fruit extract was determined using the DPPH (1,1-diphenyl-2-picryl hydrazyl) method. The extract was diluted with an equal volume of DPPH (5 µL) using methanol (analytical grade) and kept in an incubator (37 °C) for half an hour. Then, the absorption of the sample was measured at 517 nm and compared with Vitamin C (Control). The activity of free radicals in the form of % inhibition was calculated by using the equation
The antioxidant activity of Phoenix dactylifera L. fruit extract was 89%.

The oil phase was prepared by heating paraffin oil (16%) and ABIL EM90 (2.5%) to 75 ± 1 °C. At the same time, the aqueous phase (water) (q.s) was heated to the same temperature. The Phoenix dactylifera L. extract was added to the aqueous phase. The aqueous phase was subsequently added to the oil phase drop by drop with continued stirring at 2000 rpm by a mechanical mixer for 15 min until the entire aqueous phase was added. During this stirring time, two to three drops of fragrance (fruit oil) were added to yield a good fragrance to the emulsion. The test and placebo compositions are detailed in Table 1.
After continuous stirring for 15 min at 2000 rpm, the speed of the mixer was reduced to 1000 rpm for a period of 10 min for homogenization. The speed of the mixer was then further reduced to 500 rpm for a further 5 min until the emulsion cooled at room temperature.
The same method was used to formulate the base without the addition of Phoenix dactylifera L. fruit extract.

The stability tests were performed for both emulsions at different time intervals during 28 days. The conditions used were 8 ± 0.1 °C (in refrigerator), 25 ± 0.1 °C, 40 °C, 40 °C ± 75% relative humidity and 50 ± 0.1°C (in incubator). The physical characteristics (color, liquefaction, phase separation) of both the base and formulation were evaluated. The formulation was stable with respect to all these parameters.

2.2.5. Evaluation of the Emulsion on Human Skin

Eleven female volunteers with an age range of 23–30 years (mean age 25.5) were selected for inclusion in the study. To determine any possible reactions to the creams, a patch test was performed on the forearms of each individual volunteer and after 48 h, results were recorded for any skin irritancy.
On the next day, two creams (placebo cream and cream with extract) were provided to each volunteer. Each cream was marked “right” and “left” for application to the “right” and “left” cheek, respectively and volunteers applied it once daily at bedtime. Volunteers were instructed to apply the creams for eight weeks and to return for measurements on Weeks 1, 2, 3, 4, 6 and 8. This study was approved by the Board of Studies, Department of Pharmacy, the Islamia University of Bahawalpur and all the volunteers agreed and signed an informed consent before start of the study.

The patch test was performed on the forearms of each volunteer on the first day of skin testing. For this purpose, a 5 × 4 cm region was marked on both the forearms of each volunteer with the help of a scale. The zero value of skin melanin and erythema were noted with the help of a Mexameter. Small amounts of base and formulation were applied separately on each forearm on the marked area and the area was covered with surgical dressing. Dressings were removed after 48 h and measurements of melanin and erythema values were performed on both forearms.

The following formula was used to calculate the percentage changes for the individual values of different parameters.
Percentage Change = [(TA − TB)/TB] × 100
where TA = Individual value of any parameter after Weeks 1, 2, 3, 6, and 8; TB = Baseline value of particular parameter.

3.1. Stability Tests for Base and Formulation

Samples of base and formulation were kept at different storage conditions and their stability was studied. The tests were performed at 8 °C, 25 °C, 40 °C, 40 °C with 75% relative humidity, and 50 °C. Both the base and the formulation were stable against different storage conditions.
Organoleptic parameters relating to stability (color, liquefaction, phase separation) and centrifugation test results are presented in the Table 2.
There was no change in the color of base and formulation at all storage temperatures. As far as the viscosity and phase separation of the emulsions is concerned, there was a slight change in the base after 21 weeks at 40 °C with 75% relative humidity and 50 °C, while that change was observed in the formulation only at 50 °C.
The Phoenix dactylifera L. extract has very good antibacterial and antifungal activity. It contains high levels of tannins and phenolic compounds—such as ferulic acid, ρ-coumaric acid, ρ-hydroxybenzoic acid, certain oxidative enzymes, steroids, flavonoids, etc.—which are responsible for antibacterial activity. They have reported antibacterial activity against gram negative bacteria like K-pneumonia and E. coli [9]. Presence of different polyphenols are responsible for its antifungal activity especially against Fusarium oxysporum f. sp. Albedinis (Foa) [10]. Most probably, due to the presence of Phoenix dactylifera L. extract in the formulation (off-white formula) stabilizes it at high temperatures when compared to base (white formula).
The presence of a lipophilic emulsifier, such as Abil EM 90, also stabilizes the emulsions at high temperatures [11].
The thermal kinetic energy overcomes the gravitational energy of the emulsions and is responsible for stabilizing the emulsions against phase separation [12].

Skin color is determined by pigmentation and protects the body against UV radiations. It is due to the presence of a pigment named melanin. Melanin is synthesized by melanocytes and stored in melanosomes. Melanosomes are spread into the skin by melanocytes with the help of dendrites and with the spread of these melanosomes, the melanin also spreads [13].
The melanin values of the skin of the cheeks were measured by using a Mexameter MX 18 (Courage + Khazaka, Cologne, Germany). These values were measured on the first day before the application of base and formulation and then on Weeks 1, 2, 3, 4, 6, and 8. The percentage changes in the skin melanin after the application of base and formulation are given in Figure 1.
The effect of base and formulation on the production of skin melanin were observed. There was an increase in the skin melanin with the application of base while a significant decrease was observed with the application of formulation from Weeks 1 to 8.
When ANOVA was applied with the 5% level of significance, it showed a significant result with time. With the paired sample t-test, the result showed that there are significant variances after two weeks in the effects of base and formulation.
In the fruit of Phoenix dactylifera L., the presence of polyphenolic compounds and flavonoid glycosides of luteolin, quercetin, and apigenin is the reason behind the antioxidant activity of this fruit. The antioxidant activity of the fruit varies depending upon the variety and the method of extraction [3].

Authors are highly thankful to Cosmin Moldovan, University of Medicine and Pharmacy of Târgu Mures, Târgu-Mureş, Romania for his valuable effort in improving this manuscript for English editing. 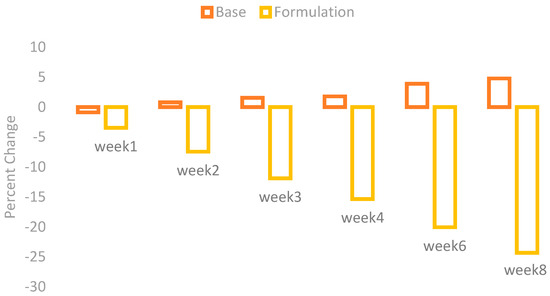 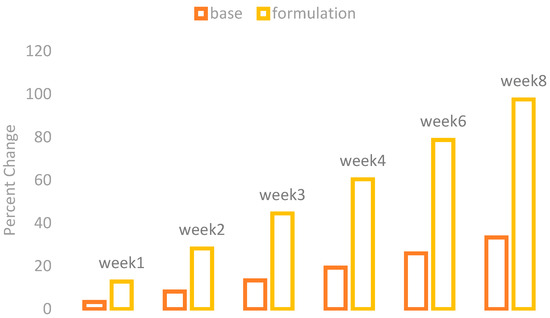 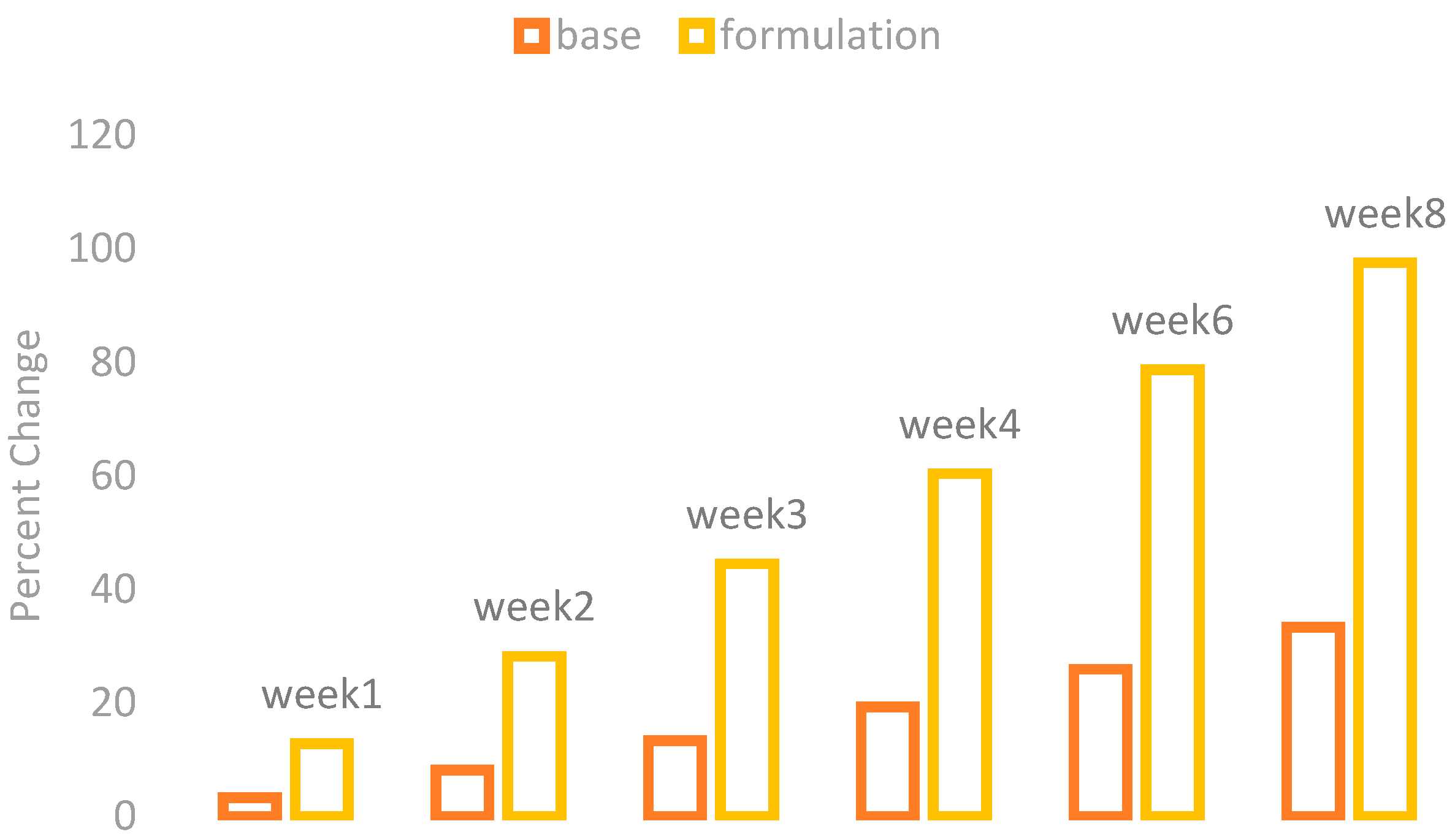 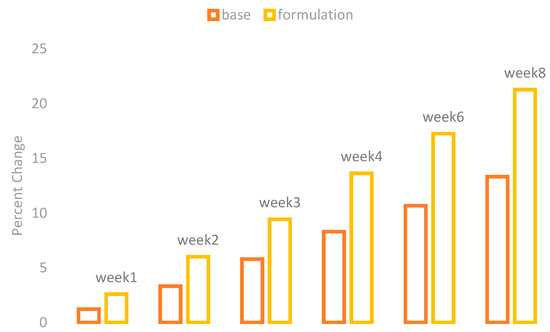