Biomass Sources and Energy Potential for Energy Sector in Myanmar: An Outlook
Previous Article in Journal

:
Potential depletion of fossil fuel and climate change have globally accelerated the demand in renewable and alternative energy. Most of the Southeast Asian countries have an abundance of biomass sources for the energy sector due to their agriculture-based economy and enormous forest resources. Therefore, the study aimed at highlighting an overview of biomass energy in the Southeast Asia countries to convey the environmental and economic benefits from the available biomass sources in the region. In order to achieve the aim, the study synthesized and evaluated the biomass sources, energy potential, utilization, and management in the region, based on the published research papers, review papers, and country reports. It was found that the major biomass sources in this region were fuelwood, wood residues, rice husk, rice straw, sugarcane residues, oil palm residues, and coconut residues. The total annual quantity of the biomass potential from agriculture and forest sector in the region was estimated at more than 500 million tons per year and equal to over 8000 million gigajoules of total energy potential. In order to implement the sustainable utilization of biomass sources, the study specified the barriers and challenges of biomass utilization in these countries and proposed a sustainable approach of biomass energy, by comparing the way of traditional biomass utilization.
Keywords:
biomass sources; biomass energy; utilization of biomass; renewable energy; Southeast Asia

Since most Southeast Asian countries are developing countries, the country-specific data related to biomass sources, energy potential, and utilization in some countries including Myanmar, Cambodia, and Lao PDR have not been sufficiently accessible during recent years. Therefore, the data were collated to a feasible extent from the peer-reviewed research papers, reviewed papers, policy reports by the organizations such as Asian Development Bank, the World Bank, United Nations Food and Agriculture Organization, International Energy Agency, International Renewable Energy Agency, and reports by non-government organizations. Then, the study synthesized and evaluated the biomass sources, energy potential, utilization, and management in the Southeast Asian countries to highlight the potential utilization of the available biomass sources in the region. Additionally, the barriers and challenges of biomass utilization in these countries were also described. Finally, the study proposed a sustainable approach of biomass energy by comparing the way of traditional biomass utilization.

4. Barriers and Challenges for Utilization of Biomass

Scaling up sustainable, modern forms of bioenergy will be crucial both to address the energy access challenge, and to increase renewable energy use in both industry and transport [9]. Table 5 presents the barriers and challenges for utilization of biomass. Policy and institutional aspects are crucial to development of biomass energy sector. However, specific goals and targets on the biomass energy development could not clearly seen in most of the countries yet. Meanwhile, as driven by the low economy growth of the countries, lack of sufficient funding for research and development and purchase of technologies is one of the biggest challenges in the development of biomass energy sector in most of the Southeast Asian countries such as Myanmar, Lao PDR, and Cambodia. Likewise, public and private sector involvement is still uncertain owing to the uncertain profits and risks of utilization of biomass energy, since utilization of biomass sources concerns with low energy contents, bulky volume of biomass sources, need for large storage systems and high transportation costs, data reliability issues, underdeveloped biomass industries, and lack of local skilled personnel. Additionally, some of the useful and important information about biomass sources are not widespread among the local people thorough education and training programs. Consequently, the cooperation of the local people in the development of the bioenergy sector remains weak. As one of the most crucial things, market development still seems slow because of lack of sufficient funding, research and development, and weakness of all stakeholder involvement.

Nowadays, due to the climate change, fast growing populations, and economic growth in the region, the Southeast Asian countries have outlooked the renewable and alternative energies to reduce the greenhouse gas emissions and other environmental impacts from the energy sectors. Out of them, utilization of biomass energy derived from the enormous biomass sources from agriculture and forest residues has become a crucial factor of meeting the future energy needs. In addition to environmental and energy benefits, the economic benefits from utilization of biomass energy could also be gained largely from the production of value-added biomass fuel and agriculture nutrients, fewer imports of fossil fuels and agricultural nutrients from other foreign countries, reduced cost of waste disposal, and local job opportunities that could increase the household incomes of local people.
For the efficient utilization of biomass sources, the countries will need to develop the way forward from traditional management to sustainable one, as described in Figure 8. As the traditional management of biomass sources in most of the Southeast Asian countries, it is observed that firstly, the management process generally seems to go through harvesting and storage, then traditional consumption patterns follow—animal feed, traditional consumption for cooking and heating, open burning and dumping, and traditional agriculture nutrients. However, if a sustainable approach is considered, the aspects about policy and institutions, targets and goals, funding, public–private partnership, stakeholder involvements, research and development, and public awareness and educational trainings will become crucial. Based on policy and goals, research and development would need to be promoted from the growing stages of biomass resources to market development.
To ensure the higher quality of the biomass fuels for energy utilization, Koppejan and van Loo [57] suggest that the quality of the raw biomass could be improved by two stages—growing stage, and harvest and storage stage. During the growing stages, based on soil type, the chemical characteristics of biofuels and the desired yield such as type of species, agricultural and silvicultural practice, fertilization, and harvesting date should be influenced. Likewise, in the harvest and storage stage, the physical characteristics of biomass fuels can be improved by harvesting methods, transshipment, drying, sanitation, upgrading, and storage. Biomass fuel quality and utilization can be finally upgraded by fuel processing such as the improvement of calorific value, and technological conversions such as pyrolysis, combustion, gasification, fermentation, and anaerobic digestion. In addition, co-firing of biomass with coal and hybrid system could also be incorporated.
However, one of the most crucial factors that need to be considered for the estimation of available energy potential from biomass resources is the amount of energy that would be necessarily involved in the plantation of biomass crops and trees, harvesting and transporting of them, and valorization and conversion of the biomass sources into energy or agricultural nutrients. This amount of energy that must be consumed to supply the biomass energy to the society might depend upon several factors such as climate, strategic plans, and applied technologies; hence, it might contribute a substantial decrease in the amount of potential biomass energy from available biomass sources.
To achieve the sustainability and the efficient utilization of biomass as domestic solutions, financing and micro-financing could enable households and communities to purchase energy equipment through loans and other financing packages [53]. Besides, local governments and concerned authorities should implement education and awareness campaigns, public–private partnerships, creation of national technology standards, establishment of maintenance and training centers, international cooperation, technology, and intellectual property transfer [53]. In some Southeast Asia countries, the governments have already provided the project developers with investment incentives, guaranteed minimum prices, power purchase agreements with the utility grid, and exemptions pertaining to the import of equipment and certain tax credits [6]. As a result, the development of biomass energy from the locally accessible biomass sources could be systemically made in a long run. Therefore, looking forward from policy and institutions to all stakeholder involvements, a holistic approach to biomass energy sector will certainly play a key role in efficient utilization of biomass sources as a renewable and sustainable energy in the Southeast Asian countries.

Due to potential depletion of fossil fuel and climate change, the Southeast Asian countries have outlooked the renewable and alternative energies to reduce the greenhouse gas emissions and other environmental impacts from the energy sector. As most Southeast Asian countries have an agriculture-based economy and a large area of forest cover, biomass has become one of the most interesting energy sources to fulfill the primary and additional energy needs of the countries. The total annual quantity of the residues from agriculture and forest sector in this region is estimated at more than 500 million tons per year, equal to over 8000 million gigajoules of total biomass energy potential. Additionally, the total installed capacity in the region accounts for approximately 3 GW from biomass and around 330 Megawatts (MW) from biogas. Currently, biomass energy utilization and market development in the region seems progressive. Some of the Southeast Asian countries such as Thailand and Malaysia have effectively developed more innovative solutions to biomass energy utilization despite the barriers and challenges. Therefore, along with the advancements of technologies, research and development, growing energy markets, and knowledge and technology transfer from the other developed countries, biomass energy could be crucial in offering the environmental and economic benefits in the near future of the energy sector in the region.

The study was funded by the Ministry of Education, Youth and Sports of the Czech Republic and the project: SP2019/156. 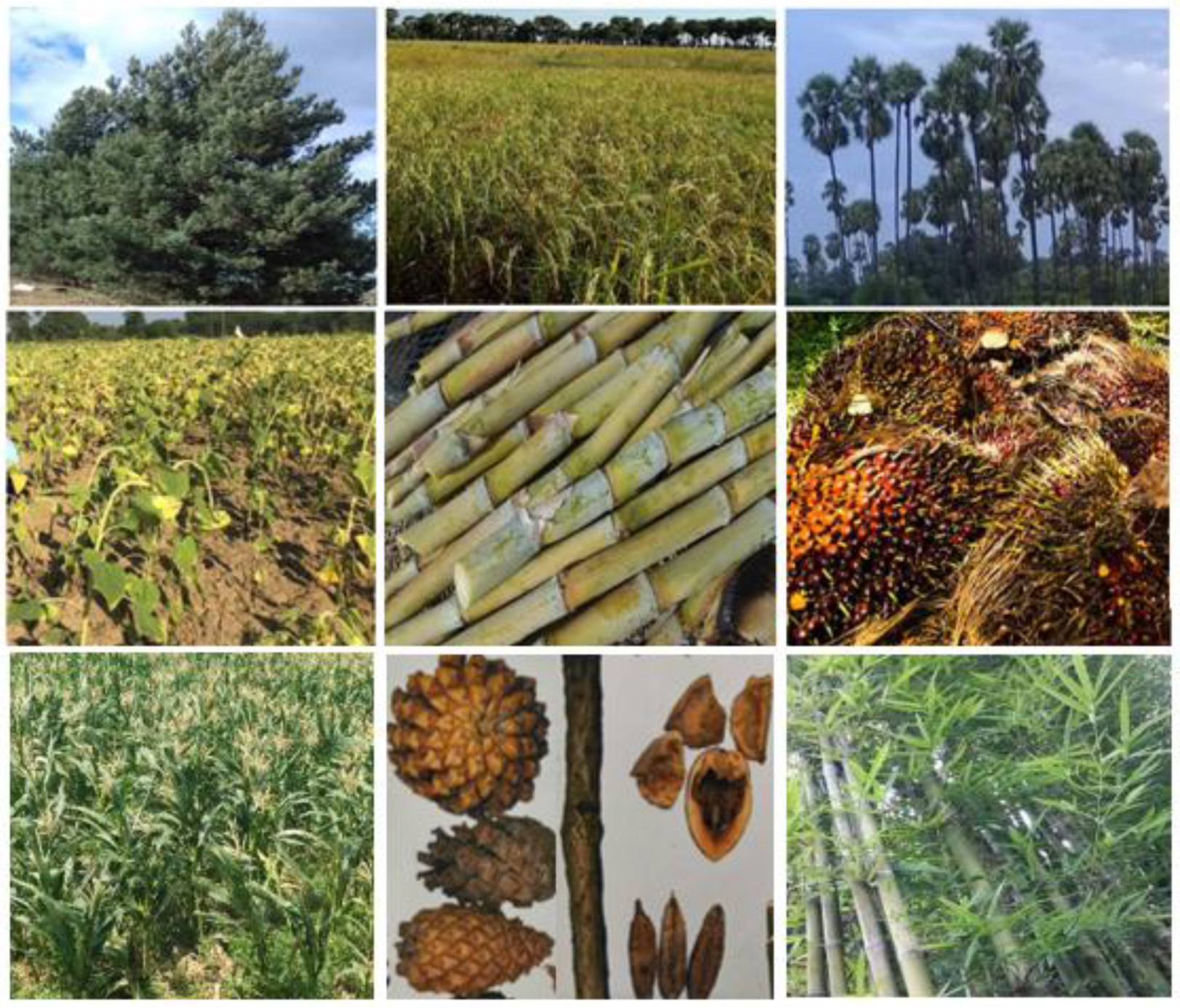 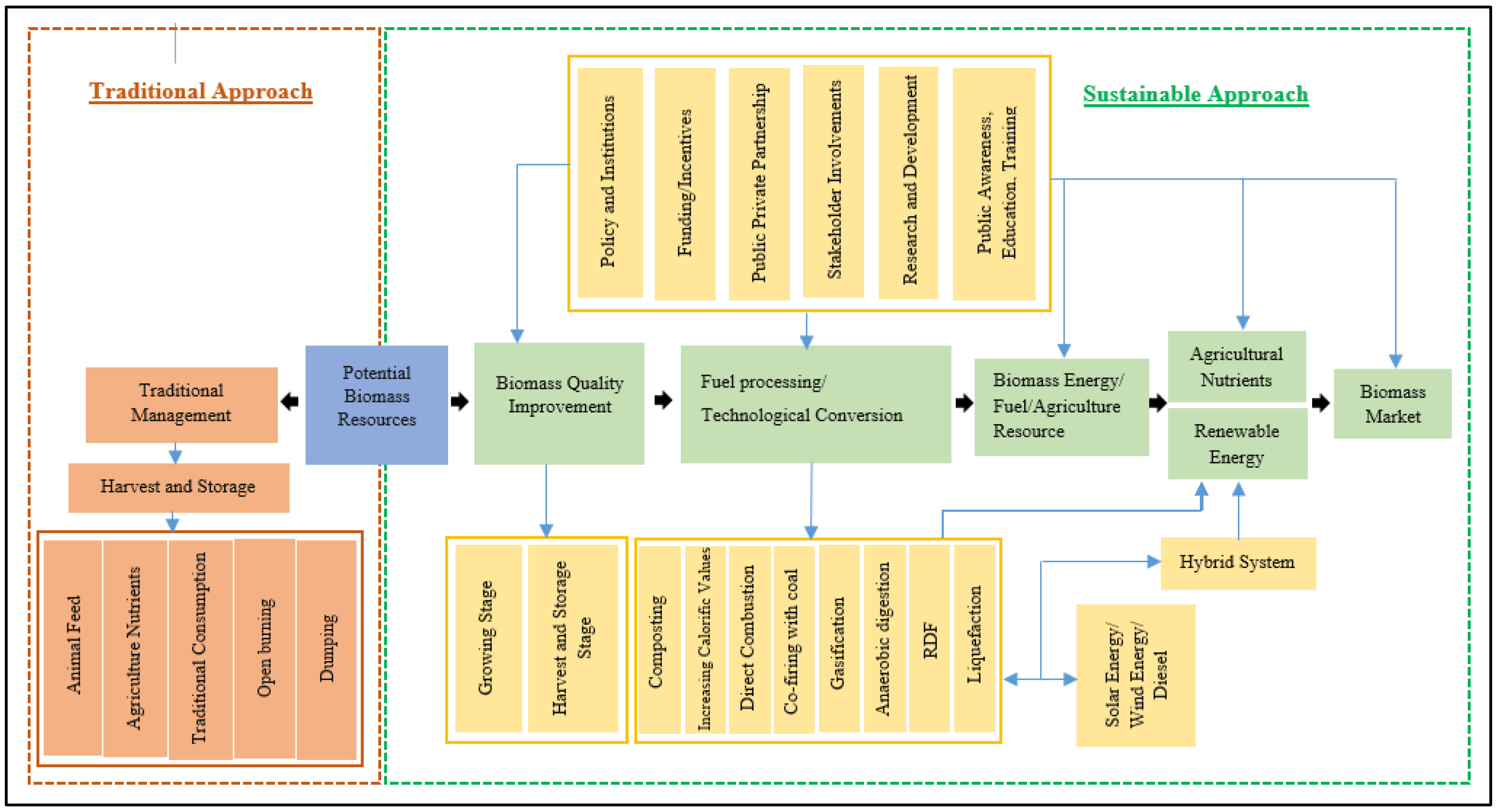