Metal Criticality Determination for Australia, the US, and the Planet—Comparing 2008 and 2012 Results

Episodic supply shortages of metals and unsettling predictions of potential supply constraints in the future have led to a series of recent criticality evaluations. This study applies a consistent criticality methodology to the United States, Australia, and to the global level for both 2008 and 2012. It is the first time that criticality assessments are presented for Australia, a country that contrasts with the United States in terms of its mineral deposits and metal use characteristics. We use the Yale criticality methodology, which measures Supply Risk (SR), Environmental Implications (EI), and Vulnerability to Supply Restriction (VSR) to derive criticality assessments for five major metals (Al, Fe, Ni, Cu, Zn) and for indium (In). We find only modest changes in SR between 2008 and 2012 at both country and global levels; these changes are due to revisions in resource estimates. At the country level, Australia’s VSR for Ni, Cu, and Zn is 23%–33% lower than that for the United States, largely because of Australia’s abundant domestic resources. At the global level, SR is much higher for In, Ni, Cu, and Zn than for Al and Fe as a consequence of SR’s longer time horizon and anticipated supply/demand constraints. The results emphasize the dynamic nature of criticality and its variance between countries and among metals. View Full-Text
Keywords: aluminum; iron; nickel; copper; zinc; indium; metal demand; supply risk aluminum; iron; nickel; copper; zinc; indium; metal demand; supply risk
►▼ Show Figures 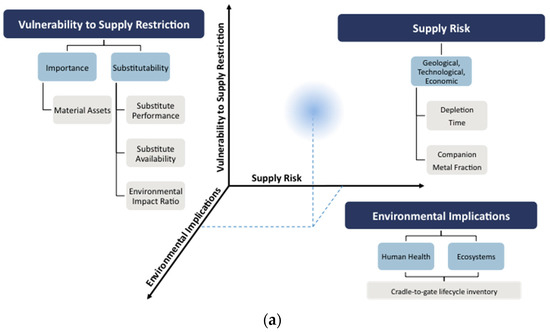