Radiation-Induced Senescence Bystander Effect: The Role of Exosomes
Next Article in Special Issue

Cellular DNA is packaged into chromatin, which is composed of regularly-spaced nucleosomes with occasional gaps corresponding to active regulatory elements, such as promoters and enhancers, called nucleosome-depleted regions (NDRs). This chromatin organisation is primarily determined by the activities of a set of ATP-dependent remodeling enzymes that are capable of moving nucleosomes along DNA, or of evicting nucleosomes altogether. In yeast, the nucleosome-spacing enzymes are ISW1 (Imitation SWitch protein 1), Chromodomain-Helicase-DNA-binding (CHD)1, ISW2 (Imitation SWitch protein 2) and INOsitol-requiring 80 (INO80); the nucleosome eviction enzymes are the SWItching/Sucrose Non-Fermenting (SWI/SNF) family, the Remodeling the Structure of Chromatin (RSC) complexes and INO80. We discuss the contributions of each set of enzymes to chromatin organisation. ISW1 and CHD1 are the major spacing enzymes; loss of both enzymes results in major chromatin disruption, partly due to the appearance of close-packed di-nucleosomes. ISW1 and CHD1 compete to set nucleosome spacing on most genes. ISW1 is dominant, setting wild type spacing, whereas CHD1 sets short spacing and may dominate on highly-transcribed genes. We propose that the competing remodelers regulate spacing, which in turn controls the binding of linker histone (H1) and therefore the degree of chromatin folding. Thus, genes with long spacing bind more H1, resulting in increased chromatin compaction. RSC, SWI/SNF and INO80 are involved in NDR formation, either directly by nucleosome eviction or repositioning, or indirectly by affecting the size of the complex that resides in the NDR. The nature of this complex is controversial: some suggest that it is a RSC-bound “fragile nucleosome”, whereas we propose that it is a non-histone transcription complex. In either case, this complex appears to serve as a barrier to nucleosome formation, resulting in the formation of phased nucleosomal arrays on both sides. View Full-Text
Keywords: Chromatin; Chromatin remodelers; ISW1; ISW2; INO80; CHD1; SWI/SNF; RSC; nucleosome spacing; nucleosome phasing Chromatin; Chromatin remodelers; ISW1; ISW2; INO80; CHD1; SWI/SNF; RSC; nucleosome spacing; nucleosome phasing
►▼ Show Figures 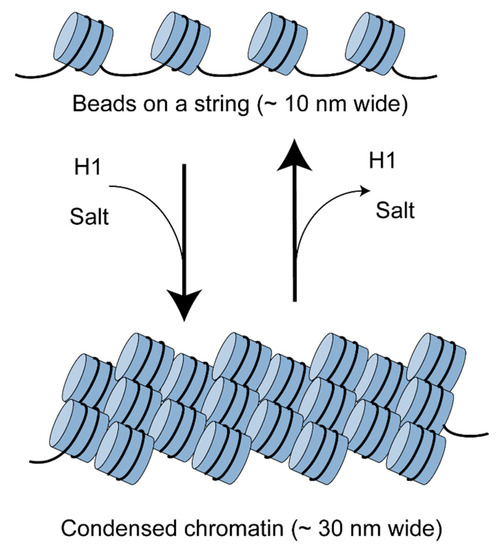