The Water Content Drives the Susceptibility of the Lichen Evernia prunastri and the Moss Brachythecium sp. to High Ozone Concentrations

Vancomycin-resistant enterococci (VRE), due to their intrinsic resistance to various commonly used antibiotics and their malleable genome, make the treatment of infections caused by these bacteria less effective. The aims of this work were to characterize isolates of Enterococcus spp. that originated from processed meat, through phenotypic and genotypic techniques, as well as to detect putative antibiotic resistance biomarkers. The 19 VRE identified had high resistance to teicoplanin (89%), tetracycline (94%), and erythromycin (84%) and a low resistance to kanamycin (11%), gentamicin (11%), and streptomycin (5%). Based on a Next-Generation Sequencing NGS technique, most isolates were vanA-positive. The most prevalent resistance genes detected were erm(B) and aac(6’)-Ii, conferring resistance to the classes of macrolides and aminoglycosides, respectively. MALDI-TOF mass spectrometry (MS) analysis detected an exclusive peak of the Enterococcus genus at m/z (mass-to-charge-ratio) 4428 ± 3, and a peak at m/z 6048 ± 1 allowed us to distinguish Enterococcus faecium from the other species. Several statistically significant protein masses associated with resistance were detected, such as peaks at m/z 6358.27 and m/z 13237.3 in ciprofloxacin resistance isolates. These results reinforce the relevance of the combined and complementary NGS and MALDI-TOF MS techniques for bacterial characterization. View Full-Text
Keywords: Enterococcus spp.; processed meat; antibiotic resistance; next-generation sequencing; MALDI-TOF MS Enterococcus spp.; processed meat; antibiotic resistance; next-generation sequencing; MALDI-TOF MS
►▼ Show Figures 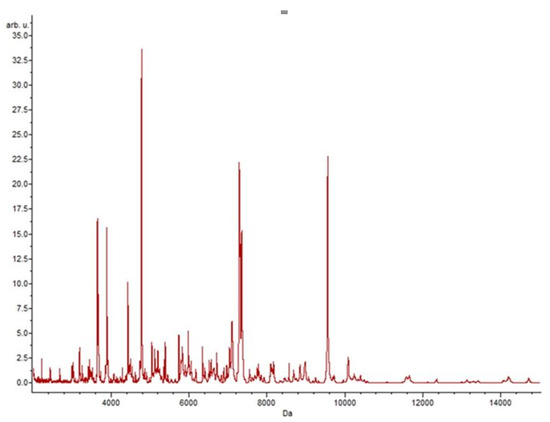