Microbiota and Obesity: Where Are We Now?

Oysters and clams form an important component of the food chain and food security and are of considerable commercial value worldwide. They are affected by pollution and climate change, as well as a range of infections, some of which are opportunistic. For aquaculture purposes they are furthermore of great commercial value and changes in their immune responses can also serve as indicators of changes in ocean environments. Therefore, studies into understanding new factors in their immune systems may aid new biomarker discovery and are of considerable value. This study assessed new biomarkers relating to changes in protein function in four economically important marine molluscs, the blue mussel, soft shell clam, Eastern oyster, and Atlantic jacknife clam. These findings indicate novel regulatory mechanisms of important metabolic and immunology related pathways in these mollusks. The findings provide new understanding to how these pathways function in diverse ways in different animal species as well as aiding new biomarker discovery for Mollusca aquaculture. 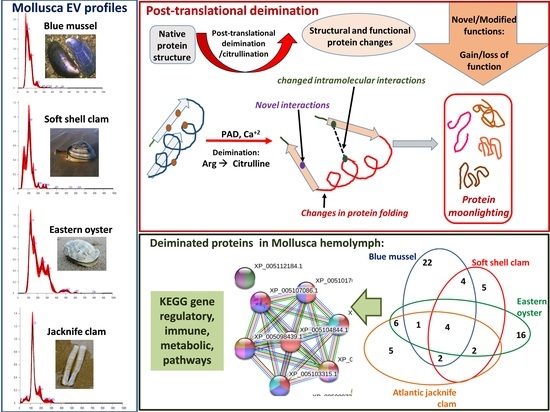