Antarctica represents one of the most limiting environments on Earth, where exposed soils, transiently present on coastal areas and permanently exposed on McMurdo Dry Valleys, are one of the few substrata supporting microbial communities. Within these communities, fungi are one of the dominant components and play pivotal roles in recycling the extremely limited organic matter available. Despite their astonishing adaptations, the diversity of these communities and the factors determining their resistance are still poorly known. In this optic, this study aimed to give insights in the environmental parameters determining the structure of these communities and their adaptive strategies, in terms of growth forms and lifestyles. We found that abiotic conditions were the main drivers of well differentiated communities. Additionally, we highlighted that most species seemed to be highly adapted to this habitat, which may result in a relatively low resilience ability to changes in environmental condition. Both these results are of particular concern in light of global warming. Even minimal changes to environmental conditions may dramatically alter the Antarctic soil communities, risking the disappearance of many species still undescribed.

In Victoria Land, Antarctica, ice-free areas are restricted to coastal regions and dominate the landscape of the McMurdo Dry Valleys. These two environments are subjected to different pressures that determine the establishment of highly adapted fungal communities. Within the kingdom of fungi, filamentous, yeasts and meristematic/microcolonial growth forms on one side and different lifestyles on the other side may be considered adaptive strategies of particular interest in the frame of Antarctic constraints. In this optic, soil fungal communities from both coastal and Dry Valleys sites, already characterized thorough ITS1 metabarcoding sequencing, have been compared to determine the different distribution of phyla, growth forms, and lifestyles. Though we did not find significant differences in the richness between the two environments, the communities were highly differentiated and Dry Valleys sites had a higher evenness compared to coastal ones. Additionally, the distribution of different growth forms and lifestyles were well differentiated, and their diversity and composition were likely influenced by soil abiotic parameters, among which soil granulometry, pH, P, and C contents were the potential main determinants.
Keywords:
growth forms; lifestyles; evenness

2.1. Description of the Localities

Soil physicochemical properties of both CS and TVS were determined and reported in Canini et al. [20,21] and used for statistical analyses. For the molecular analyses, the metagenomic DNA was extracted from each soil sample, amplified, and sequenced on an Illumina MiSeq platform. Demultiplexed sequences were then processed with the Amplicon ToolKit (AMPtk) for NGS data (formally UFITS) v.1.2.1 [37]. Starting reads were subjected to quality trimming and PhiX screening using USEARCH with default parameters (v. 9.2.64) [38]. Reads with less than 100 bp were removed, ones longer than 300 bp were trimmed, and paired-end reads were merged in one step. Individual sample sequence files were merged into a single file and clustered with a 97% identity threshold into operational taxonomic units (OTUs) using VSEARCH v 2.7.0 [39], simultaneously removing putative chimeras. Taxonomy was assigned to OTUs based on the curated UNITE+INSD reference database dynamic species hypotheses (UTAX release of 10 October 2017) using USEARCH (v. 9.2.64) [38]. Singletons (namely, OTUs with only one read in the dataset) and OTUs with less than 70% identity to a fungal species hypothesis (SH) were excluded for the following analyses. Functional assignment for OTUs with more than 90% similarity to a fungal SH with known ecological function were made by FunGuild [40] and manually checked [20,21]. Different growth form strategies were identified manually for genera with identities higher than 93% to known fungal genera.

All analyses were carried out with the vegan package [41] in R [42]. Total fungal richness, richness of dominant phyla and classes, of different growth forms (i.e., filamentous fungi, yeasts, and black yeasts) and of the two main lifestyles (lichenized and saprotrophic fungi), their relative abundances, and their evenness (eH/S) were compared among the two environments using ANOVA and Tukey’s HSD test (significant for p < 0.05). Relationships between edaphic physicochemical parameters and total fungal richness, richness of dominant phyla and classes, of different growth forms and lifestyles, and their relative abundances were investigated through linear regression analyses (significant for p < 0.05; marginally significant for 0.05 < p < 0.1).
Non-metric multidimensional scaling (NMDS) was run on the Hellinger-transformed OTU table. Ordinations were run separately for the total community, the three growth forms, and the two main lifestyles with the following specifications: distance measure = Bray–Curtis, dimensions = 2, initial configurations = 100, model = global, maximum number of iterations = 200, and convergence ratio for stress = 0.999999. We used the envfit function to fit edaphic physicochemical parameters listed above onto the NMDS ordinations. In addition, we tested whether fungal communities were significantly (p < 0.01) different among different localities and among the two different environments using the multi-response permutation procedure (MRPP).
Permutational multivariate analysis of variance (PerMANOVA) [43] was carried out on Bray–Curtis distance matrices of Hellinger-transformed OTU tables with 9999 permutations, with the adonis function, in order to determine the effect of each soil physicochemical parameter on the observed variance of the total community, the dominant phyla, the growth forms, and the lifestyles. Finally, to account for correlations among environmental variables, we performed a forward selection of parameters based on the previous results, including only significant environmental variables (p < 0.05) in the final models.

3.2. Distribution of the Different Growth Forms and Lifestyles

A total of 336 out of 860 OTUs (39.1% of the total), with at least 93% similarity to known fungal genera, were assigned to different growth forms: 241 OTUs to filamentous fungi, 64 to yeasts, and 31 to black yeasts. Among them, no significant (p > 0.05) differences on the richness of filamentous fungi between coastal and inland sites were found (Figure 2b), although their evenness was significantly (p < 0.05) higher in inner sites (Figure S1b). Instead, black yeasts showed a significantly (p < 0.05) higher richness in CS (Figure 2c), and an opposite trend for the evenness (Figure S1c). Yeasts exhibited a significantly (p < 0.05) higher richness and evenness in TVS; the richness of ascomycetous yeasts showed the same trend, while not significant (p > 0.05) differences were found for basidiomycetous yeasts (Figure 2d–f). The evenness of ascomycetous yeasts showed not significant (p > 0.05) differences between the two macro areas, while basidiomycetous yeasts followed the trend of total yeasts with a significantly (p < 0.05) higher evenness in TVS samples (Figure S1d–f). No significant (p > 0.05) difference was found on the abundance of the above-mentioned groups between the two environments (Figure S4).
A total of 461 OTUs out of 860 (54.53% of the total), with at least 90% similarity to known fungal SHs, were assigned to different lifestyles. Among them, saprotrophs and lichenized fungi were dominant, with 324 and 60 OTUs, respectively. Additionally, 16 OTUs were assigned to animal pathogens, 32 to mycorrhizal fungi, 13 to fungal parasites, and 24 to both plant pathogens and symbionts. Both saprotrophs and lichenized fungi exhibited no significant (p < 0.05) differences for their richness and abundance between the two environments (Figure 2g,h, Figure S4f,g), but their evenness was significantly higher in TVS samples (Figure S1g,h). On the other hand, no statistical analysis was carried out on minor functional groups (i.e., animal pathogens, mycorrhizal fungi, fungal parasites, plant pathogens, and symbionts) because of their low abundance and sporadic presence in different samples.

3.4. Effect of Edaphic Parameters on Community and Groups Composition

To define the main parameters driving microbial community composition and dynamics in Antarctica is one of the main goals of microbiologists, even in the face of global change dramatically affecting polar environments [73]. In this work, soil fungal communities of two different regions with different climates, representative of relatively humid coastal and dry inland sites, are shown to be highly differentiated, mainly connected to differences in local abiotic parameters.
In the scope of climate change threatening to cause a loss of dry-adapted endemic oligotrophic taxa and a greater prevalence of generalist taxa, these results are of particular interest. In fact, some groups had a result of very low evenness, often associated with a very low resilience ability. Artificial increases of water and organic matter in arid soils of the McMurdo Dry Valleys, simulating expected consequences of climate changes, were demonstrated to induce changes in both bacterial and fungal components [74]. This should be taken into account given the high differentiation in the community composition of the two macro areas, since a higher water availability could result in a higher diffusion of vegetal species. 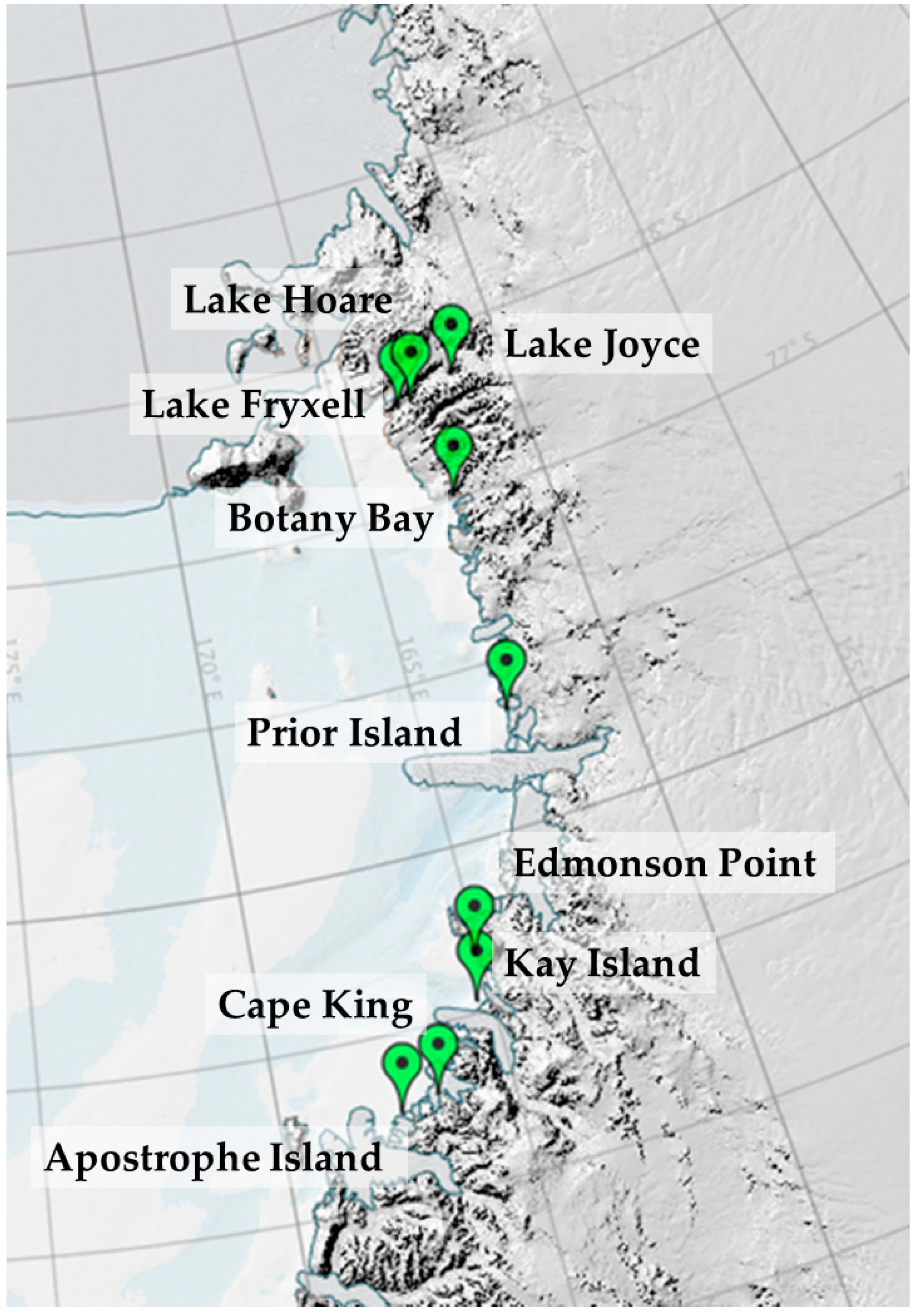 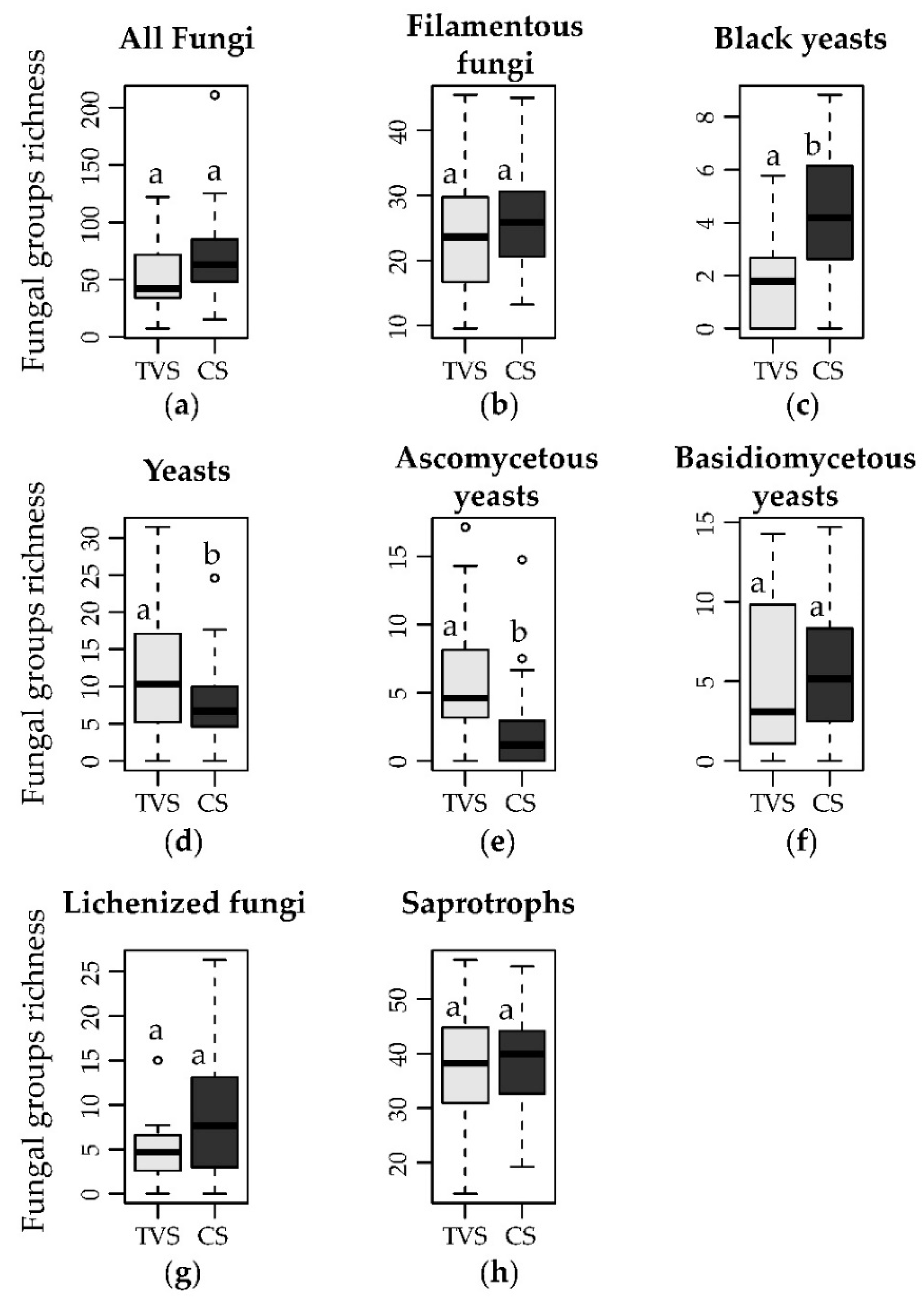 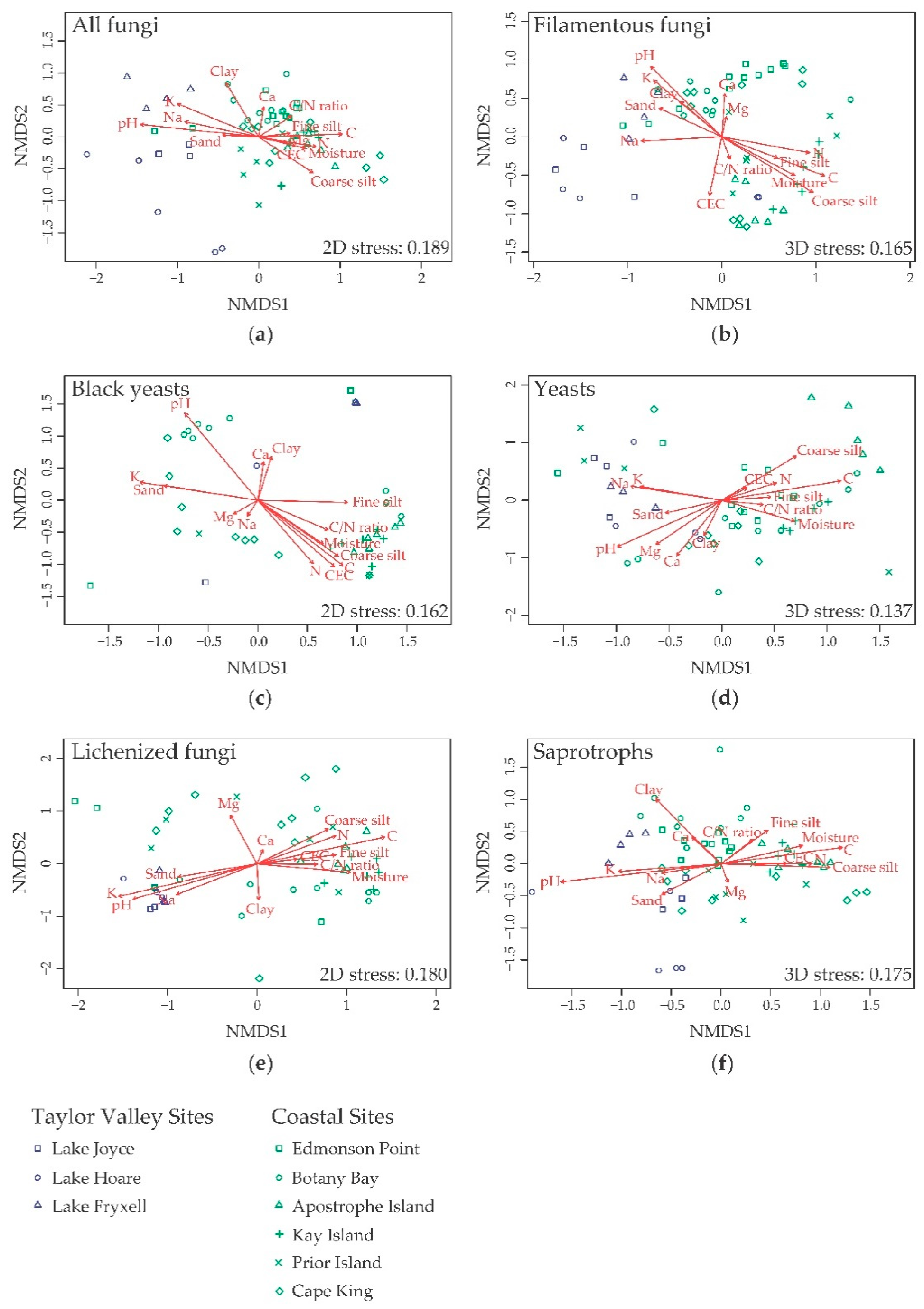