Does Dietary Fiber Affect the Levels of Nutritional Components after Feed Formulation?
Next Article in Special Issue

In this study, the isolation and characterization of nanocellulose from pineapple leaf fibers (PLF) were carried out. Chemical pretreatment included pulping, bleaching, and acid hydrolysis to remove lignin, hemicellulose, and extractive substances were conducted. This was followed by high-shear homogenization and ultrasonication to produce nanocellulose. Morphological changes to the PLF due to treatment were investigated using scanning electron microscopy (SEM). This showed that the PLF had a diameter of 1–10 µm after high-shear homogenizing. Transmission electron microscopy (TEM) indicated that the nanofibers after ultrasonication for 60 min showed 40–70 nm diameters. Particle size analysis (PSA) indicates that the fibers had an average diameter of 68 nm. Crystallinity index was determined by X-ray diffraction (XRD) and had the highest value after acid hydrolysis at 83% but after 60 min ultrasonication, this decreased to 62%. Meanwhile, Fourier transform infrared (FTIR) spectroscopy showed there was no chemical structure change after acid hydrolysis. The most significant finding from thermal gravimetric analysis (TGA) is that the higher degradation temperature of nanofibers indicates superior thermal stability over untreated fiber. These results indicate that PLF waste could become a viable source of commercially valuable nanocellulose. View Full-Text
Keywords: nanocellulose; pineapple leaf fibers; high-shear homogenization; ultrasonication; crystallinity; thermal properties nanocellulose; pineapple leaf fibers; high-shear homogenization; ultrasonication; crystallinity; thermal properties
►▼ Show Figures 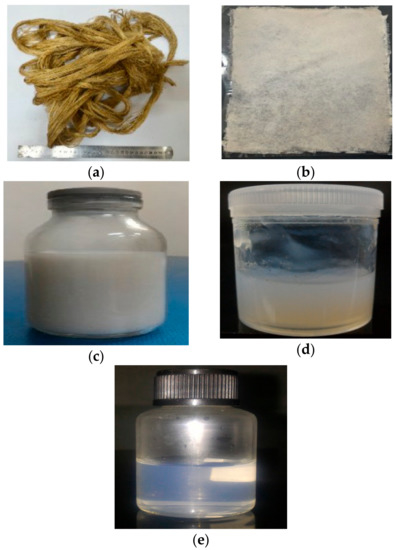