The purpose of this study was to examine surface alterations and bone formation on the surface of failed dental implants (Straumann [ST] and TiUnite [TiUn]) removed due to any biological reason. In addition, failure analysis was performed to test mechanical properties. Dental implants (n = 38) from two manufacturers were collected and subjected to chemical cleaning. The presence of newly formed hydroxyapatite bone around failed implants was evaluated using micro-Raman spectroscopy. Scanning electron microscopy was used to identify surface defects. Mechanical testing was performed using a Minneapolis servo-hydraulic system (MTS) along with indentation using a universal testing machine and average values were recorded. A statistical analysis of mechanical properties was done using an unpaired t test, and correlation between observed defects was evaluated using Chi-square (p = 0.05). Apatite-formation was evident in both implants, but was found qualitatively more in the ST group. No significant difference was found in indentation between the two groups (p > 0.05). The percentage of “no defects” was significantly lower in the ST group (71%). Crack-like and full-crack defects were observed in 49% and 39% of TiUn. The ST group showed 11,061 cycles to failure as compared with 10,021 cycles in the TiUnite group. Implant failure mechanisms are complex with a combination of mechanical and biological reasons and these factors are variable with different implant systems. View Full-Text
Keywords: titanium; Raman; hydroxyapatite; failed; dental implant; mechanical; nanoindentation titanium; Raman; hydroxyapatite; failed; dental implant; mechanical; nanoindentation
►▼ Show Figures 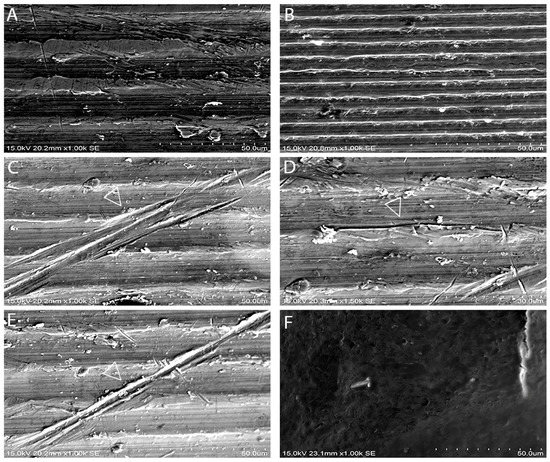