Infections involving biofilms are difficult to treat due to increased resistances against antibiotics and the immune system. Hence, there is an urgent demand for novel drugs against biofilm infections. During our search for novel biofilm inhibitors from fungi, we isolated linoleic acid from the ascomycete Hypoxylon fragiforme which showed biofilm inhibition of several bacteria at sub-MIC concentrations. Many fatty acids possess antimicrobial activities, but their minimum inhibitory concentrations (MIC) are high and reports on biofilm interferences are scarce. We demonstrated that not only linoleic acid but several unsaturated long-chain fatty acids inhibited biofilms at sub-MIC concentrations. The antibiofilm activity exerted by long-chain fatty acids was mainly against Gram-positive bacteria, especially against Staphylococcus aureus. Micrographs of treated S. aureus biofilms revealed a reduction in the extracellular polymeric substances, pointing to a possible mode of action of fatty acids on S. aureus biofilms. The fatty acids had a strong species specificity. Poly-unsaturated fatty acids had higher activities than saturated ones, but no obvious rule could be found for the optimal length and desaturation for maximal activity. As free fatty acids are non-toxic and ubiquitous in food, they may offer a novel tool, especially in combination with antibiotics, for the control of biofilm infections. View Full-Text
Keywords: fatty acid; Hypoxylon fragiforme; biofilm inhibition; Gram-positive bacteria; Staphylococcus aureus fatty acid; Hypoxylon fragiforme; biofilm inhibition; Gram-positive bacteria; Staphylococcus aureus
►▼ Show Figures 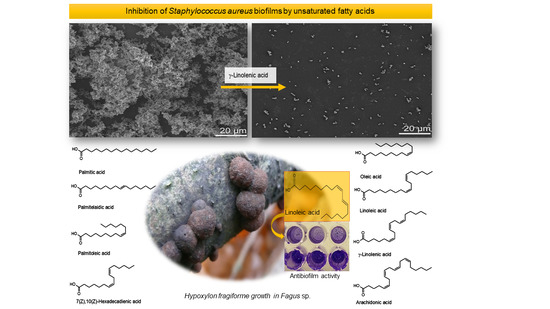