Diagnostic Value of Serum Procalcitonin in Patients with Convulsion in Emergency Department, an Observational Study
Previous Article in Special Issue

Clostridioides difficile colitis overgrowth occurs when the normal gut microbiome becomes disrupted, often due to antibiotics. Effective treatment remains elusive, due partly to the persistence of its spores in the gut. Natural substances like manuka honey offer an alternative antimicrobial mechanism of action to conventional antibiotics. We investigated the antibiotic activity of manuka honey against 20 C. difficile isolates. The minimum inhibitory concentrations (MICs) and minimal bactericidal concentrations (MBC) of manuka honeys of methylglyoxal (MGO) grades 30+, 100+, 250+, and 400+ were determined based on broth microdilution. Sporicidal activity was assessed in a range of honey concentrations by enumerating total viable cell and spore counts at 0–96 h after organism inoculation. The MICs of C. difficile ranged from 4% to >30% (w/v). MIC50 for the four MGO grades were similar at 10–14%. MBC results for the majority of isolates were distributed bimodally at MBC/MIC ratios ≤4 or MBC >30%. Growth kinetics in honey showed total viable cell counts remaining >105 colony-forming units (CFU)/mL at all time points, whereas spore counts remained within 1-log of baseline (102 CFU/mL) in honey but steadily increased in the drug-free control to >105 CFU/mL by 96 h. Manuka honey demonstrated variable inhibitory and bactericidal activity against C. difficile. MGO grade had no noticeable impact on overall MIC distributions or bactericidal activity. Although manuka honey could inhibit spore proliferation, it did not eradicate spores completely. View Full-Text
Keywords: methylglyoxal; spore; C. difficile infection methylglyoxal; spore; C. difficile infection
►▼ Show Figures 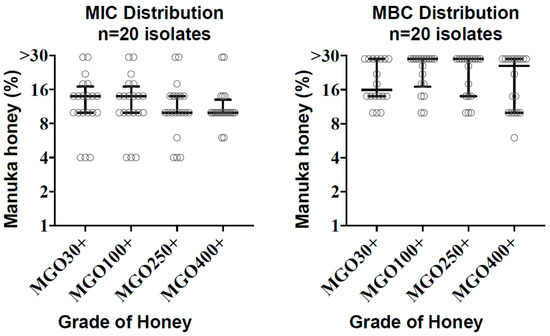