Impact of an Education-Based Antimicrobial Stewardship Program on the Appropriateness of Antibiotic Prescribing: Results of a Multicenter Observational Study
Previous Article in Journal

Colistin use has mostly been stopped in human medicine, due to its toxicity. However, nowadays, it still is used as a last-resort antibiotic to treat hospital infections caused by multi-drug resistant Enterobacteriaceae. On the contrary, colistin has been used in veterinary medicine until recently. In this study, 210 fecal samples from pigs (n = 57), calves (n = 152), and the farmer (n = 1) were collected from a farm where E. coli harboring mcr-1–mcr-3 was previously detected. Samples were plated, and mcr-genes presence was confirmed by multiplex-PCR. Hybrid sequencing which determined the presence and location of mcr-1, other antibiotic resistance genes, and virulence factors. Eighteen colistin resistant isolates (13 from calves, four from pigs, and one from the farmer) contained mcr-1 associated with plasmids (IncX4, IncI2, and IncHI2), except for two that yielded mcr-1 in the chromosome. Similar plasmids were distributed in different E. coli lineages. Transmission of mcr-1 to the farmer most likely occurred by horizontal gene transfer from E. coli of calf origin, since plasmids were highly similar (99% coverage, 99.97% identity). Moreover, 33 virulence factors, including stx2 for Shiga toxin E. coli (STEC) were detected, highlighting the role of livestock as a reservoir of pathotypes with zoonotic potential. View Full-Text
Keywords: Escherichia coli; colistin; mcr; plasmids; MinION nanopore; hybrid sequencing; livestock Escherichia coli; colistin; mcr; plasmids; MinION nanopore; hybrid sequencing; livestock
►▼ Show Figures 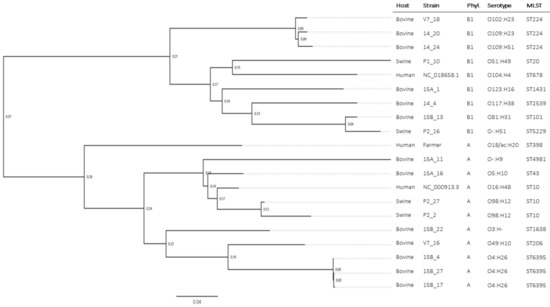