The Role of Electrochemical Immunosensors in Clinical Analysis

This paper compares the structural design of two organic biosensors that minimize power consumption in wireless photoplethysmogram (PPG) waveform monitoring. Both devices were fabricated on the same substrate with a red organic light-emitting diode (OLED) and an organic photodiode (OPD). Both were designed with a circular OLED at the center of the device surrounded by OPD. One device had an OLED area of 0.06 cm2, while the other device had half the area. The gap distance between the OLED and OPD was 1.65 mm for the first device and 2 mm for the second. Both devices had an OPD area of 0.16 cm2. We compared the power consumption and signal-to-noise ratio (SNR) of both devices and evaluated the PPG signal, which was successfully collected from a fingertip. The reflectance-based organic pulse meter operated successfully and at a low power consumption of 8 µW at 18 dB SNR. The device sent the PPG waveforms, via Bluetooth low energy (BLE), to a PC host at a maximum rate of 256 kbps data throughput. In the end, the proposed reflectance-based organic pulse meter reduced power consumption and improved long-term PPG wireless monitoring. View Full-Text
Keywords: organic optoelectronic device; pulse meter; biosensor; Bluetooth low energy (BLE); photoplethysmogram (PPG) organic optoelectronic device; pulse meter; biosensor; Bluetooth low energy (BLE); photoplethysmogram (PPG)
►▼ Show Figures 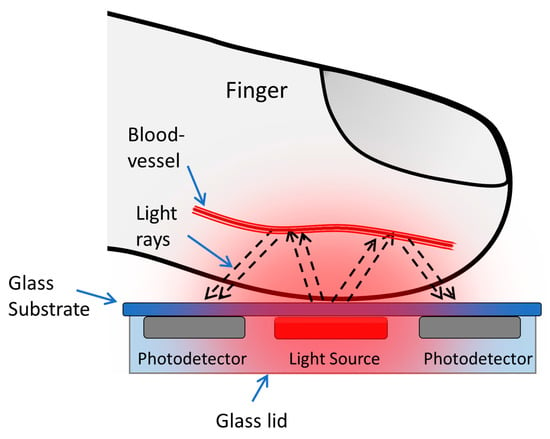