Trends and Perspectives in Immunosensors for Determination of Currently-Used Pesticides: The Case of Glyphosate, Organophosphates, and Neonicotinoids
Previous Article in Special Issue

Polyvinyl alcohol (PVA) and tin chloride (II) pentahydrate (SnCl4·5H2O) were used as precursor materials and distilled water was used as a solvent. PVA with an average molecular weight of 80,000 g/mol and SnCl4·5H2O were supplied by Sigma–Aldrich Química (Madrid, Spain).

First, an aqueous PVA solution (11% wt.) was prepared by dissolving PVA in distilled water and heating at 80 °C, under stirring for 2 h. Next, SnCl4·5H2O was added and the solution was cooled to room temperature, with stirring during cooling.

The SnO2 nanofibres (NFs) were prepared by an electrospinning process. The precursor solution (PVA + SnCl4·5H2O) was loaded into a syringe equipped with a metallic needle. A positive voltage of 19 kV was applied to the needle tip and the metal collector was grounded. The solution flow rate was 2 µL/min and the distance between the needle tip and the collector (silicon substrate) was 6 cm. Details of the electrospinning system are described in a previous work [30]. All sensors were prepared in the same conditions and NFs were grown onto micromachined silicon substrates with integrated heaters that allowed the calcination of the nanofibres in the test cell. The NFs were calcined at 500 °C for 4 h in air, obtaining nanofibres of SnO2.

2.4. Experimental Setup of the E-Nose System

Two electronic noses were developed: WiNOSE 5.0 for the nanosensors (R1, R2 and R3 nanofibre-based tin oxide sensors) and WiNOSE 6.0 for the commercial sensors. The schematics of both e-noses were very similar. The main difference between them is that the former is intended for laboratory use and the latter is a hand-held device that can also be used in the field [31]. Figure 1 shows the schematics of the WiNOSE. Details of the electronics can be found in [32].
The gases were generated by the dynamic dilution of bottles of 2 ppmv of NO2 in synthetic air. The sensors were heated to several temperatures using the resistances integrated into the micro-machined sensors and controlled by the electronic nose. The electronic nose and the gas generation instrumentation were controlled by a custom LabVIEW software that also registered the measurements to a computer. Figure 2 shows the scheme of the experimental set-up to measure the sensors.
Detections were carried out in air at temperatures ranging from 25 to 200 °C, with a constant flow of 200 mL/min. The NO2 concentrations varied from 0.1 to 0.5 ppmv with an exposure time of 10 min.

The WiNOSE 5.0 using three tin oxide NF nanosensors (R1, R2 and R3) was prepared with the same procedure. The silicon substrates of the sensors had integrated microheaters that allowed the sensitive layers to be heated and interdigitated electrodes (IDTs) to measure the sensitive layer resistance. The substrates with sensitive layers of tin oxide NFs covering the surface of the IDTs were mounted in a standard TO-8 package for the electrical characterization of the sensors. The TO-8 device was placed in the stainless-steel test cell inside the apparatus.
The WiNOSE 6.0 uses eight state-of-the-art commercial metal-oxide (MOX) microsensors, CC801 and CC803 (Cambridge CMOS Sensors Ltd., Cambridge, UK), operating at different temperatures. CC801 is intended for monitoring indoor air quality including carbon monoxide (CO) and a wide range of volatile organic compounds (VOCs), while CC803 is aimed at the detection of ethanol. However, like the majority of MOX sensors, they are also sensitive to NO2.

The fibres were randomly distributed on the substrate forming porous interlaced networks, as can be seen in the SEM images (Figure 3). In general, the fibres had nanometric diameters from 40 to 50 nm and their lengths reached several tens of microns. The nanofibres were constituted by multitude of nanograins whose diameters were less than 15 nm, as calculated from the broadening of the X-ray diffraction peaks in a previous work [30]. The nanograins were evenly distributed in the fibres, forming a porous nanostructure (Figure 3b).

The WiNOSE 5.0 consists of the three tin oxide NF nanosensors (R1, R2 and R3). The sensors were exposed to different NO2 concentrations in the sub-ppmv range (0.1 to 1 ppmv). Figure 4 shows the sensor resistance changes in the detection processes. At room temperature, the resistance changed only with concentrations higher than 0.1 ppmv NO2. However, at 150 and 200 °C, the sensor detected 0.1 ppmv NO2 with a response (R = (R/Ra), where Ra and R stand for the sensor resistance in air and under exposure to NO2, respectively) of 1.42 and 1.37, respectively. While the responses were high at temperatures below 200 °C, the response times were slow. At low temperature, the sensors did not reach saturation during the exposure time to NO2, although the resistance changes were observed after 2 min of exposure. Both the response and recovery processes depended on the operating temperature. At 200 °C, the responses obtained were lower than those reached at 150 °C. However, the sensors reached saturation at 200 °C during exposure to NO2 and at this temperature, the response and recovery times were lower than at 150 °C.
Figure 5 shows the responses achieved in the detection of 0.1, 0.2, 0.5, and 1 ppmv NO2 at different temperatures with the R1 and R2 sensors. No remarkable differences were observed. The response of the R3 sensor was very similar to that of the other two. All sensors tested had a maximum sensitivity at 150 °C. Therefore, the optimum detection temperature may be between 150 and 200 °C.
In order to check the long-term repeatability and reliability of the sensors, the detections were repeated after 10 weeks. The response curves obtained after inactive periods were similar (Figure 6), which confirms the reproducibility of the results. At 10 weeks, an increase of the sensors’ resistance was observed due to a slow aging process via interaction with surrounding gases. These increases were more evident as the operating temperature of the sensor became higher.

The responses of the R1, R2 and R3 sensors to NO2 were measured at 25 °C, 50 °C, 100 °C and 200 °C to determine the best operating temperature and the possibility of operating these sensors at low temperatures. In order to study more accurately the performance of the sensors, calibration curves were calculated and analysed for various temperatures. The responses of two of the sensors (R1 and R3) tested for NO2 detection (between 0.1 and 2 ppmv) were used for calibration. An ortho-normal calibration [33] was performed and the RMS and R2 of the calibrations were calculated, as shown in Figure 7. This calculation was repeated for each sensor and each temperature, and the results are compiled in Table 2. To test the combined power of the two sensors, we also carried out a partial least squares (PLS) regression with both sensors as independent variables and the concentration of NO2 as the dependent variable. The PLS was validated and evaluated by leave-one-out cross validation. This validation consisted of a loop in which every point was selected once. Then the rest of the points were used to compute a calibration that was used to predict the concentration of the point left out. This prediction was compared with the real concentration. The results can also be seen in Table 2.

Measurements of low NO2 concentrations were performed at several temperatures ranging from 20 °C to 350 °C. Meaningful responses were only obtained above 250 °C. Figure 8 shows the response of the two types of commercial sensors at 255 °C and 350 °C. The same analysis as for the calibration was carried out for the commercial sensors and the results are summarized in Table 3.

In the detection processes, the resistance changes occurred with the adsorption of gaseous molecules on the sensitive surface. Nanostructures were considered for gas detection applications due to their high surface area–volume ratio. In this work, the nanostructures—porous nanofibre networks—were composed of many nanograins that favoured the adsorption of gases.
The sensor calibrations had low errors, especially around 50–100 °C, and a lower error at room temperature. At higher temperatures, the sensors probably experienced some instability and the measurements had a much higher variability, which reflected the weaker performance. The sensors showed a good linear response in the concentration range tested. The combination of both sensors in a multilinear calibration was validated and the results were better estimated because the stricter validation and the aggregation of both sensors on a single performance was validated. The PLS had low error that tended to increase with the temperature and showed very good performance at 50 °C.
The sensors based on nanofibres had better low-temperature performance than commercial sensors and also better than that reported in the literature (Table 4). The references showed that NO2 concentrations lower than 0.5 ppm were detected and that the sensors would operate at moderate temperatures generally higher than 150 °C. Most of the references of the sensitive layers corresponded to complex nanostructures prepared by hydrothermal methods (due to difficulty to control the process, and problems of reliability and reproducibility). Although there are usually references for the sensor response (RNO2/Rair), there is no detail of the sensor resistance. The commercial sensors used in this work, did not have any significant response below 250 °C, but they showed a more stable response with lower errors in the calibration for higher temperatures.

The results confirm that electrospun tin oxide nanostructured sensors can be used as sensors in electronic noses for environmental applications due to their high response to low NO2 concentrations, even at room temperature. They will allow for the development of new low-cost, low-consumption, sensor-based smart systems for the detection of gases. The adequate distribution of sensor networks (electronic noses) can provide information on pollution variation in large areas.
In future work, the humidity effect and ozone interference on sensor responses will be studied. In order to improve the sensor performance, catalytic metals (Au, Pd, and Ag) or graphene will be incorporated into the nanofibres. These additives will increase the sensor response at low temperatures and accelerate the processes of absorption and desorption.

SEM analyses were performed by the University of Extremadura. 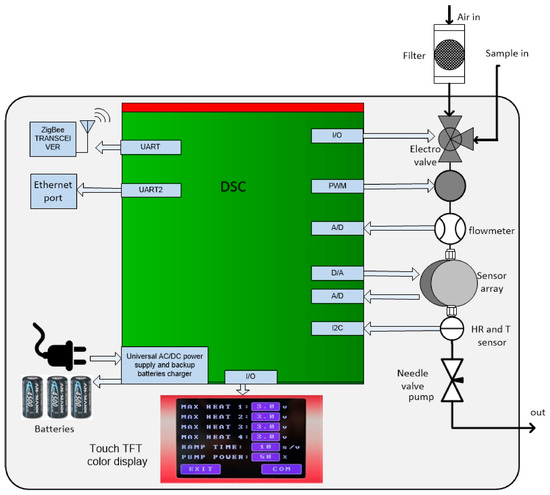 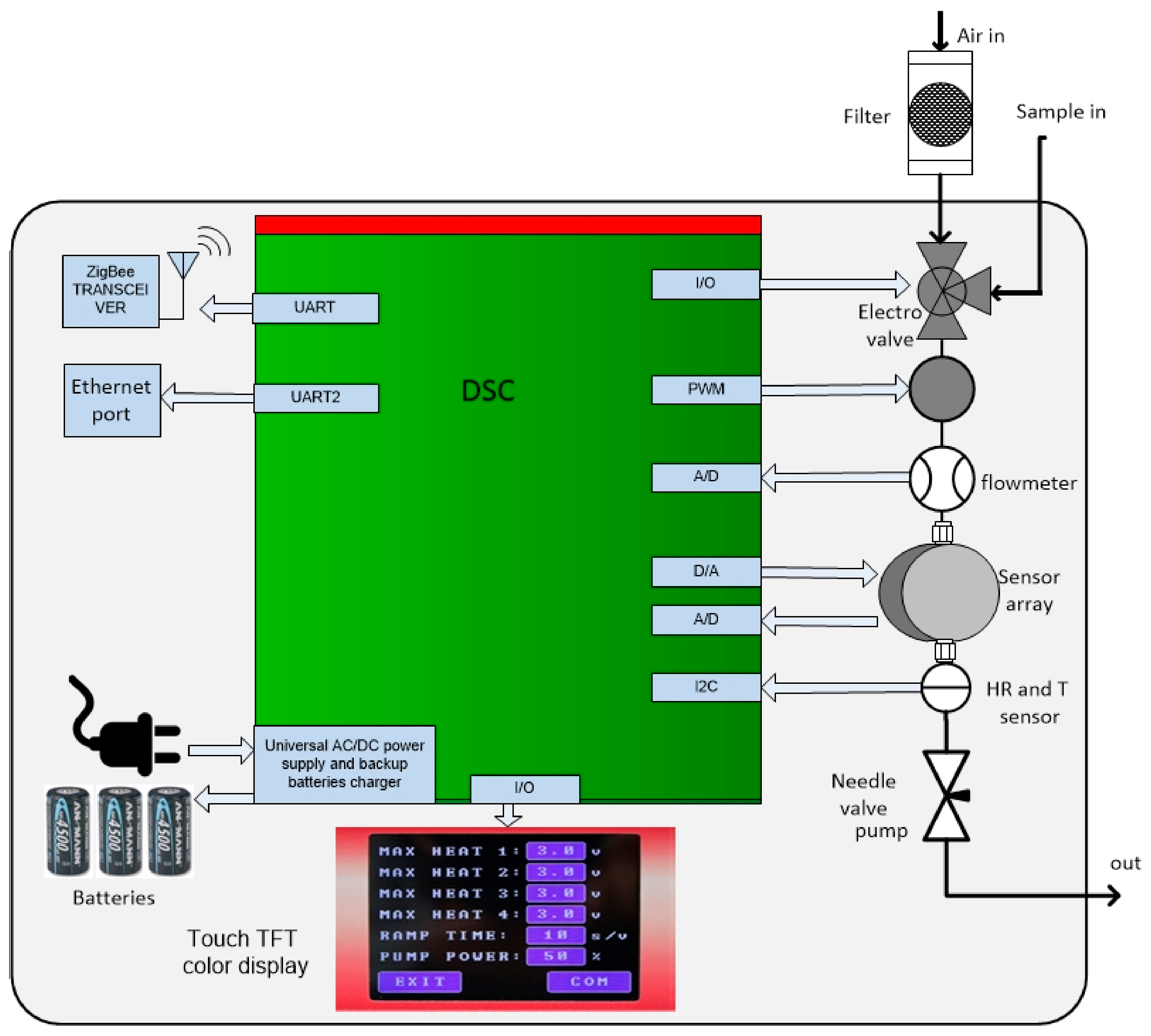 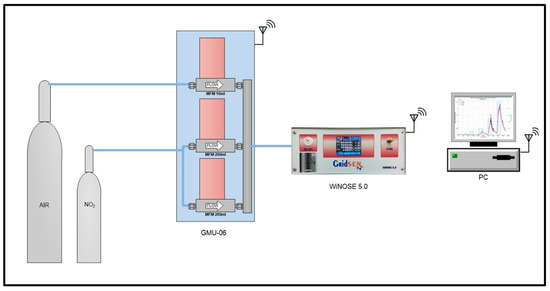 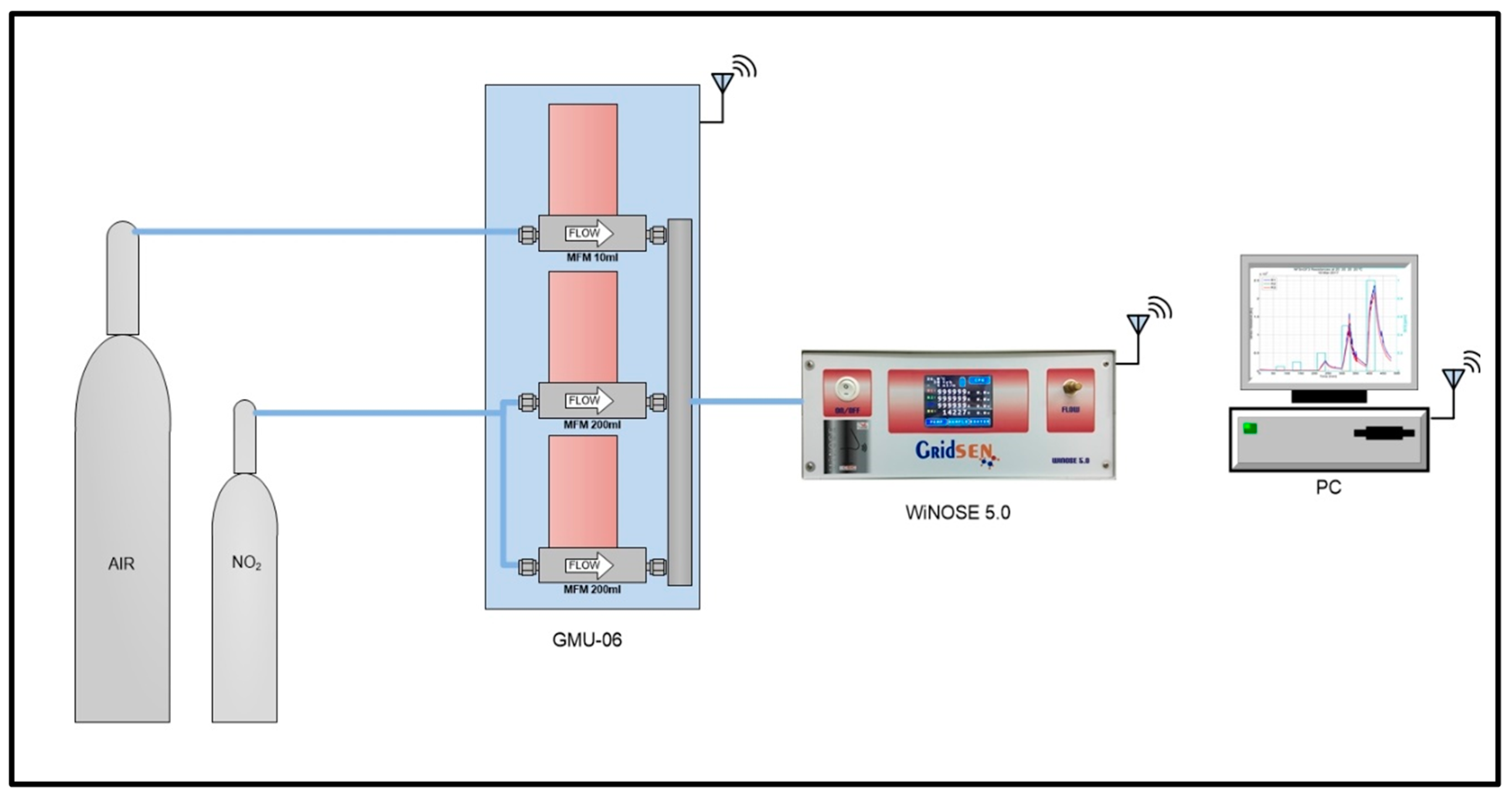 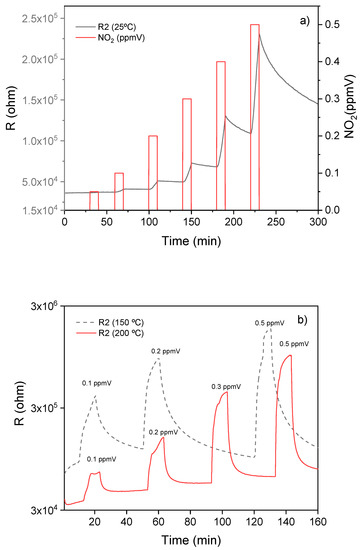 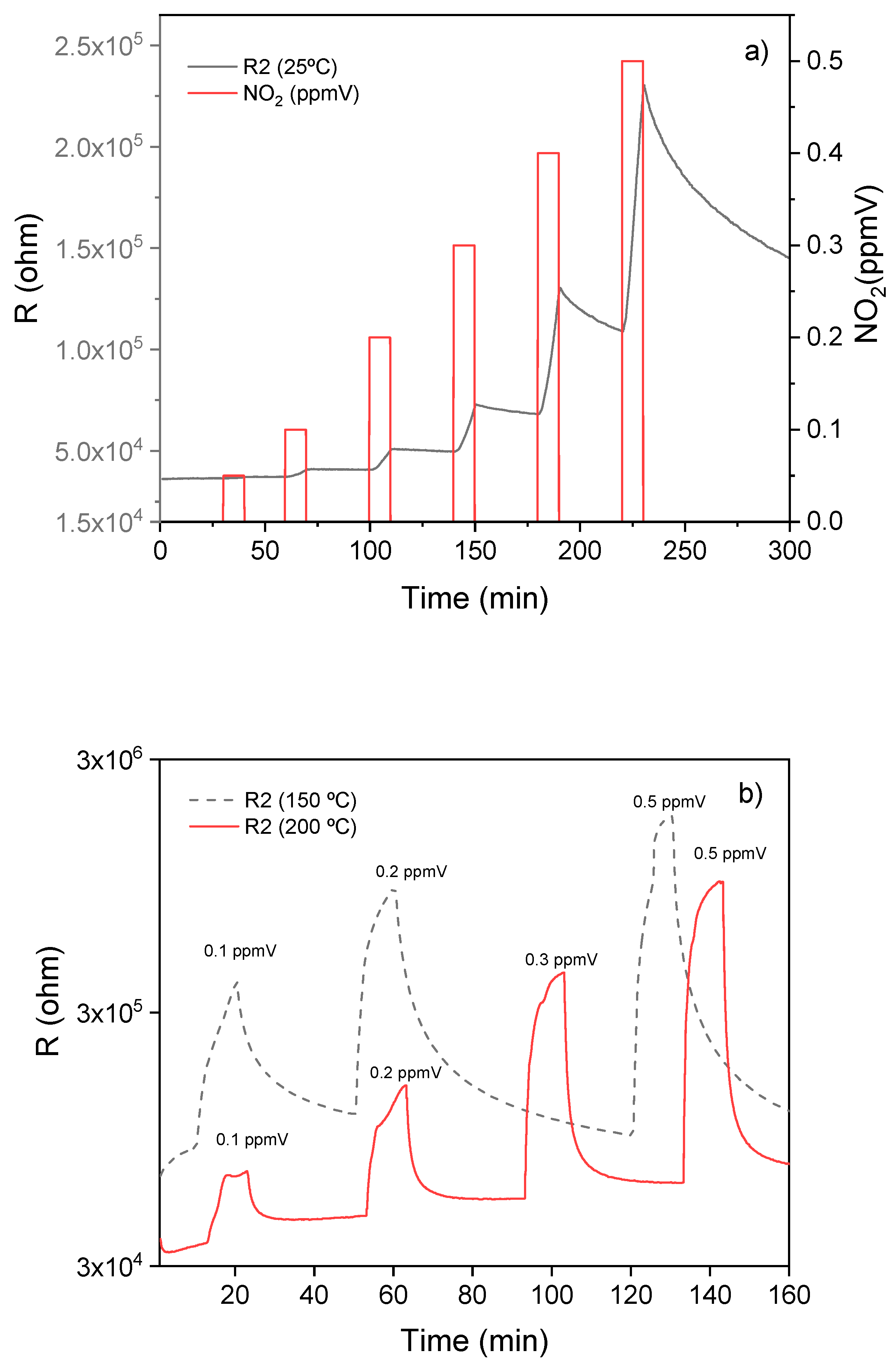 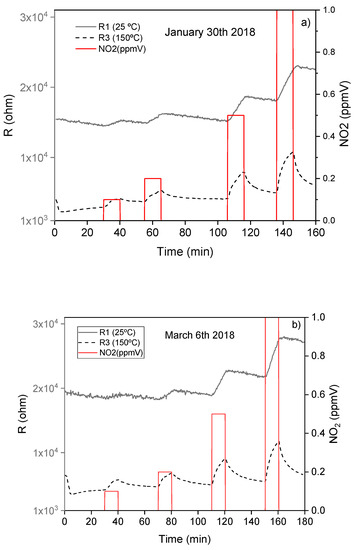 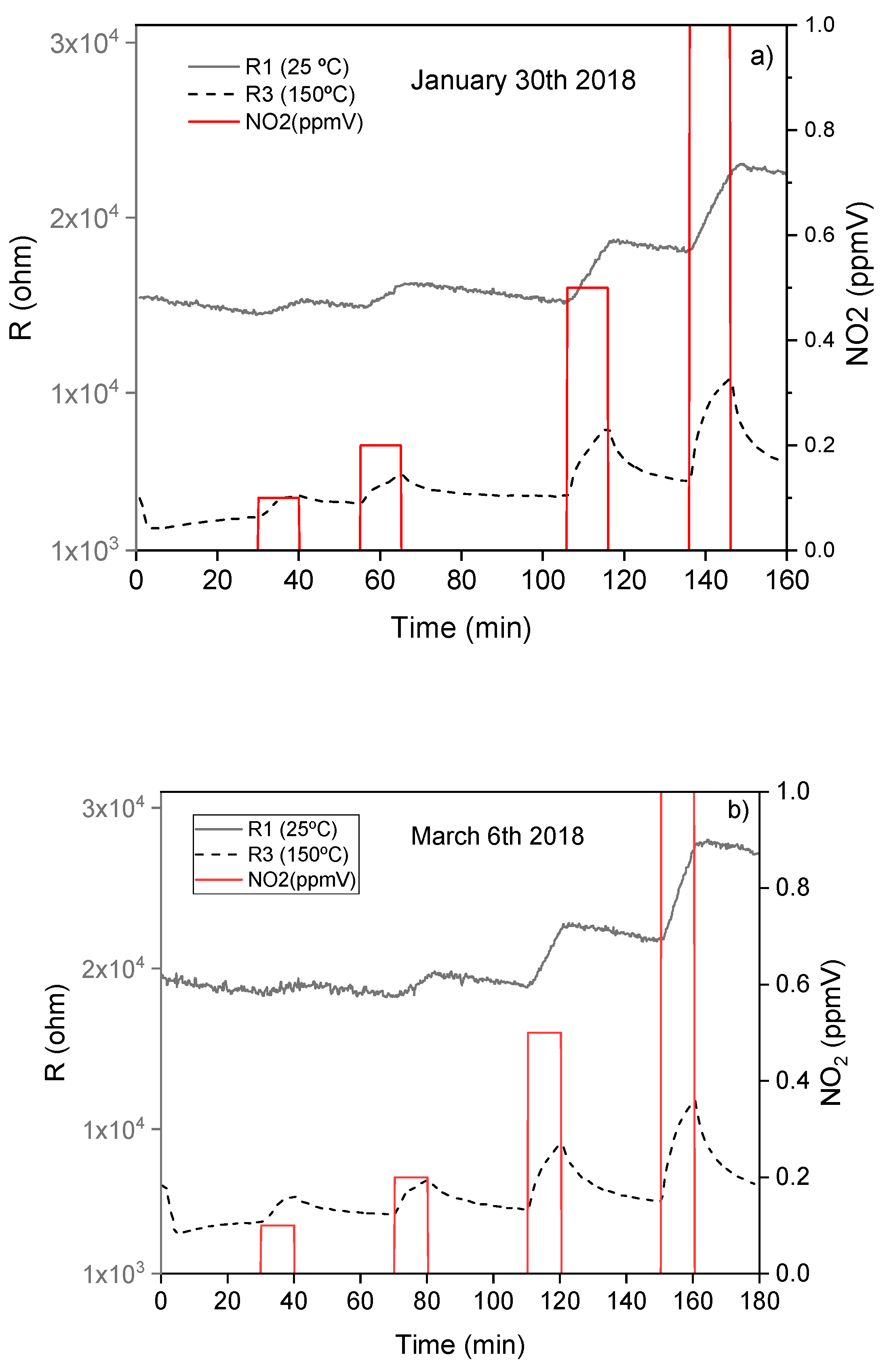 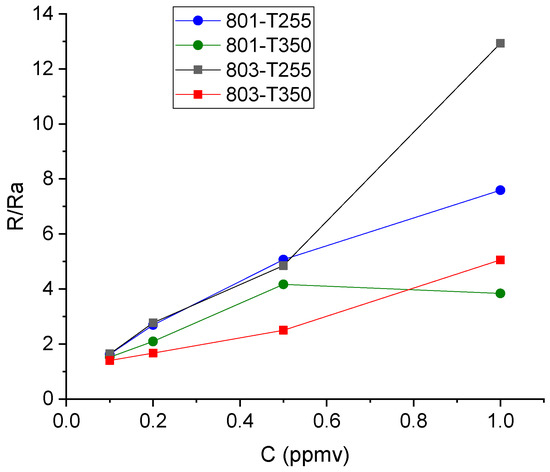 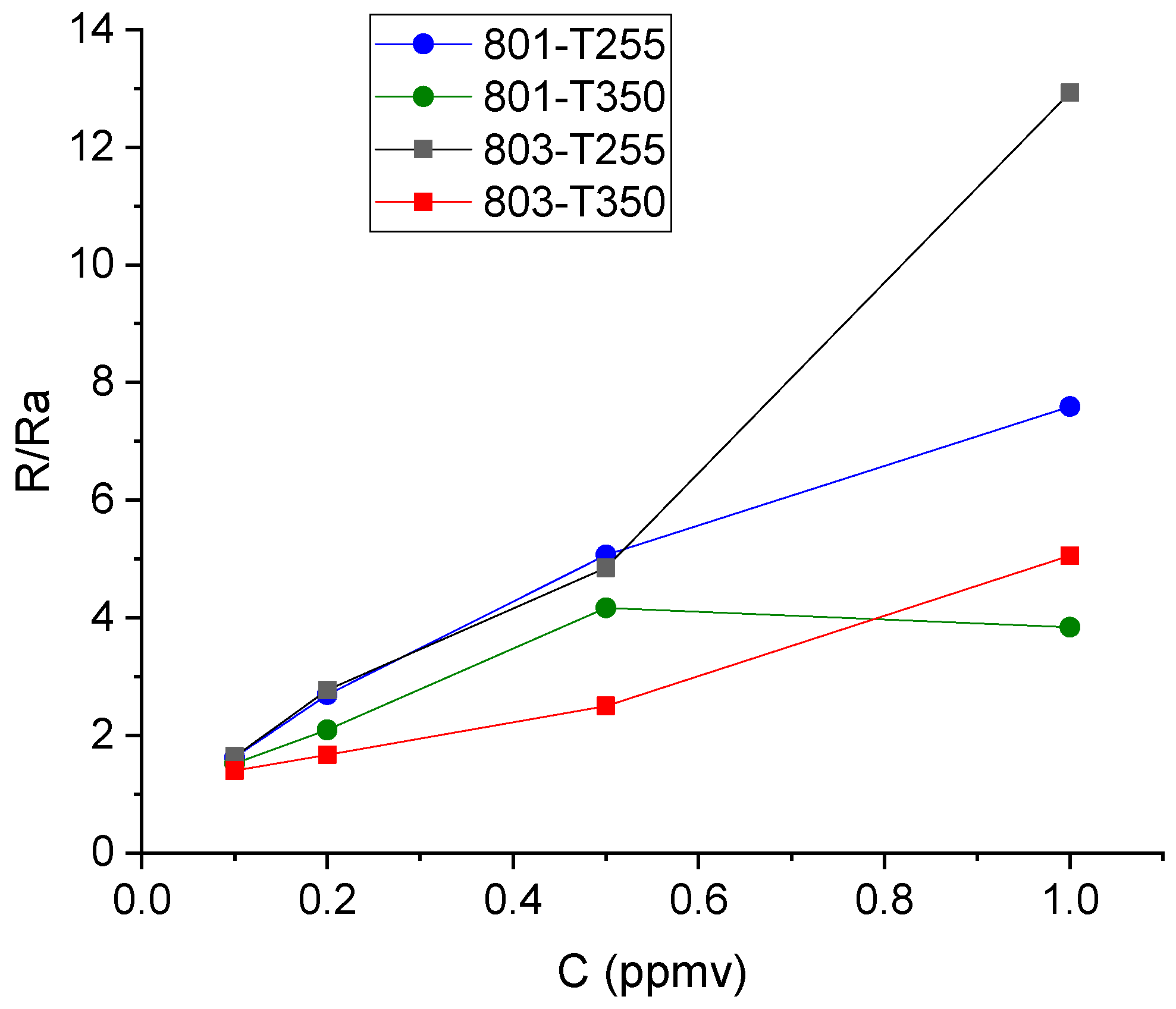