Sensors Based on Metal Nanoclusters Stabilized on Designed Proteins

Medical imaging is an active field of research that fosters the necessity for novel multimodal imaging probes. In this line, nanoparticle-based contrast agents are of special interest, since those can host functional entities either within their interior, reducing potential toxic effects of the imaging tracers, or on their surface, providing high payloads of probes, due to their large surface-to-volume ratio. The long-term stability of the particles in solution is an aspect usually under-tackled during probe design in research laboratories, since their performance is generally tested briefly after synthesis. This may jeopardize a later translation into practical medical devices, due to stability reasons. To dig into the effects of nanoparticle aging in solution, with respect to their behavior in vivo, iron oxide stealth nanoparticles were used at two stages (3 weeks vs. 9 months in solution), analyzing their biodistribution in mice. Both sets of nanoprobes showed similar sizes, zeta potentials, and morphology, as observed by dynamic light scattering (DLS) and transmission electronic microscopy (TEM), but fresh nanoparticles accumulated in the kidneys after systemic administration, while aged ones accumulated in liver and spleen, confirming an enormous effect of particle aging on their in vivo behavior, despite barely noticeable changes perceived on a simple inspection of their structural integrity. View Full-Text
Keywords: iron oxide nanoparticles; multimodal nanoparticles; biodistribution; magnetic resonance imaging; aging; coating degradation iron oxide nanoparticles; multimodal nanoparticles; biodistribution; magnetic resonance imaging; aging; coating degradation
►▼ Show Figures 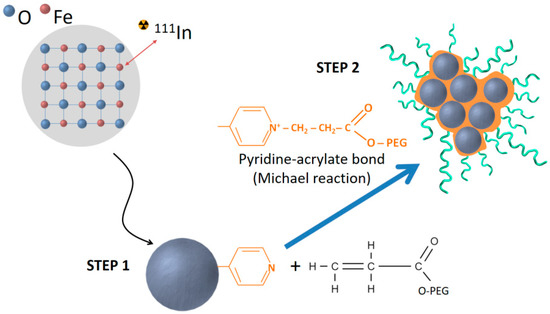