Single wall carbon nanotubes are ideal candidates for label-free sensing; every atom is on the surface, hence their electronic properties are very sensitive to the surrounding charge environment [1]. Many reports have described carbon nanotube sensors for the detection of free proteins [2,3,4], DNA [5,6,7], viruses [8,9], and even cancer cells [10,11,12,13]. For many of these, the sensing mechanism is the gating effect of the target proteins as they bind to the antibodies, bringing them near the carbon nanotube (CNT) channels within the Debye length [14,15]. When using antibodies as recognition elements, the large size of the antibody can enable the target protein to interact outside the space charge layer or the Debye length of the sensor. This could reduce the sensitivity and specificity of the biosensor. Thus, antibody binding fragments [16] and aptamers [17] have been proposed for sensing very small concentrations of proteins. In the past nanotube-aptamer technology has been used to detect the binding of thrombin, IgE, and VEGF [18,19,20]. Researchers previously demonstrated IL-6 detection using antibody-nanotube systems with multiple label and amplification strategies [21,22,23]. For the first time, this study demonstrates label-free nanotube micro-array platforms using PASE conjugated aptamers for detection of IL-6 protein, an important cancer biomarker.
Interleukin-6 (IL-6) is a multi-functional cytokine characterized as a regulator of immune and inflammatory responses [24,25]. IL-6 plays a crucial role in tumor microenvironment regulation in a number of cancers, including breast, oral, prostate, and pancreatic cancers [26,27,28,29,30,31,32]. Higher levels of IL-6 in the blood of patients have been associated with advanced/metastatic cancers [26,33,34,35]. Overexpression of IL-6 receptor has also been shown in cervical cancer cells [36]. Such findings have increased the interest in development of anti-IL-6 therapeutics to target many of related diseases [37,38,39,40,41]. In this environment, an efficient, simple, and reliable diagnostics technique is of significant interest, and nanotube micro-arrays can help in sensitive detection and validation from multiple sensors in the same arrays. Having the ability to detect the levels of IL-6 in blood can help diagnose cancer at early stages. Further, the smaller arrays that have been developed for detection of cancer cells in buffy coats in the past [10] and more recently demonstrated larger arrays to capture spiked breast cancer cells in blood using the same PASE functionalization protocol [12,13] thus provide a unique opportunity to create multiplexed assays for the detection of proteins and capture of circulating tumor cells simultaneously all in one digital format. This may enable higher information content on the disease progression.
Detection of IL-6 is only applicable at low concentrations, 12–300 pg/mL, for practical clinical utility in metastatic cancers [34,42,43,44,45]. Electrochemical sensing of IL-6 has been reported using different methods, namely gold nanoparticles, carbon nanotube forest electrodes, and ferrocene loaded polyelectrolyte nanoparticles [21,22,23]. Detecting very small amounts of biomarkers using CNT-FETs has been a challenge due to the complication that the relative large size of antibodies creates in regards to Debye length. The effect on the mobile charge on the material is not realized if the target molecule is placed Debye length away from the surplus charge [46], which can be the case in the ionic environment that the CNT-FET biosensors operate in for biological applications with reference to the antibody size. To solve this issue aptamers have been used for biosensing of immunoglobin E (IgE) using CNT-FETs and showed improvement in sensor performance compared to an antibody coated nanotube channel under similar conditions [17]. Using aptamers, this study demonstrated the ability to detect IL-6 at concentrations as low as 1 pg/mL by using nanotube micro-arrays.

The ability to detect IL-6 at low concentrations in serum can have implications in the clinic. IL-6 levels in serum >12 pg/mL have been correlated with large tumor size and elevated Serum-C Reactive Protein (CRP) levels for colorectal cancers [50]. Patients with undetectable levels of IL-6 in the serum had a mean CRP level of 27 mg/L, whereas it was 43 mg/L for patients with detectable IL-6 levels (~300 pg/mL) [26,33,34,35]. Patients with IL-6 levels >300 pg/mL exhibited CRP levels of 117 mg/L [26,33,34,35]. IL-6 is detected due to the secretion of IL-6 from the cancer cells into the blood stream and thus very low detection thresholds can be indicators of cancer development and can lead to life saving measures.
In the past the gold nanoparticle immunosensor gave a detection limit (DL) of 10 pg /mL of IL-6 in 10 μL calf serum [21]. The sensitivity of SWNT forest immunosensor was 0.5 pg/mL for the same assay protocol but this assay uses multi-label detection technique and is inferior to label free techniques [21]. Our nanotube-FET with 1 pg/mL in buffer solution and 10 pg/mL in blood sensitivity is thus capable of achieving 10 pg/mL sensitivity in serum. However, to determine the final specificity of IL-6 biosensing platforms, including our micro-arrays, other cytokines such as G-CSF, IL-4, TNF-α and IFN-γ must be tested in order to address exclusion of possible ambiguous recognition. These are the next steps in being able to use these micro-arrays in unaltered blood that can detect both levels of IL-6 and circulating tumor cells. The big unanswered question is, is there a correlation between levels of IL-6 and CTCs in blood that could be indicative of the metastatic condition? Past reports have shown that increased level of serum IL-6 in some patients with lung cancer has been reported previously and shown to be part of an inflammatory response [51]. The nanotube micro-arrays with the PASE functionalization protocol thus paves the way to detect these two important targets for diagnosis, treatment and progression of cancer.
To conclude, this study presented an approach to detect an important cancer biomarker, namely IL-6 using semiconducting nanotube channels. IL-6 in the level of 1 pg/mL to 10 ng/mL was detected successfully in both buffer and blood samples using a PASE conjugated IL-6 aptamer as the molecular recognition element. The nanotube micro-array is thus capable of capturing cancer cells using antibodies and detecting IL-6 using aptamers. An assay that could detect both proteins and capture cells simultaneously can lead to an understanding between the serum levels of IL-6, CRP levels and the number of CTCs in blood.

The sensors are a three-terminal design. A carbon nanotube network connects the source and drain Ni/Au electrodes and the electrodes are covered by an insulating layer of SU8 photopolymer. Gate voltage is applied through an external Ag/AgCl reference electrode.
The first step in the process is assembling the nanotube network. A 99% weight IsoNanotubes-Semiconducting single wall carbon nanotube mixture was purchased from NanoIntegris (c/o Raymor Industries, 3765 La Verendrye, Boisbriand, QC, Canada). Nanotubes are listed at 1.2–1.7 nm diameter and 300 nm to 5 microns length. Nanotubes were suspended in surfactant solution at 1 mg/100 mL when received. 300 µL of the stock solution, 3 µg of CNT, were aspirated and then diluted to 3 μg/100 mL solution of DI water and sodium dodecyl Sulfate (SDS) (Sigma-Aldrich, St. Louis, MO, USA; Cat.#: 436143).
The 100 mL solution was vacuum filtered over a cellulose membrane, 0.05 μm pore size (Millipore, Billerica, MA, USA; Cat.#: VMWP09025). This method self-regulates the deposition rate of nanotubes on the membrane to produce an evenly distributed network. The network is then pressed onto a dry oxidized (300 nm thickness) silicon wafer for 30 min. Next, the wafer is transferred to an acetone vapor bath which dissolves the membrane.
Patterning of the nanotube film and electrode and insulating layer fabrication are done by photolithography in the cleanroom. SC1813 photoresist is used to mask the nanotube film areas needed for the sensor elements. Exposed nanotubes are etched away in a March reactive ion etcher for 90 s at 200 W power with oxygen plasma. SC1827 photoresist is used to mask the electrode pattern. Electrodes consist of a 15 nm Ni adhesion layer and a 90 nm Au layer. They are deposited by sputtering in a Leskar PVD 75 system, 300 W DC power. Last, the sensors are covered with SU8–2005, a 5 μm thick photopolymer layer. A window over each of the nanotube sensor elements is developed but the electrodes remain insulated beneath the SU8, Figure 1.

50 μL of blood was collected from a volunteer subject using a lancing device for each set of tests. The collected blood sample was transferred into a vial and diluted 1:4 with 1 mM MgCl2 1× PBS buffer solution containing IL-6 protein to create IL-6 spiked samples accordingly for 10, 100, and 1000 pg/mL final concentrations. The prepared spiked blood samples were immediately used for testing. Plain blood samples were prepared in the same fashion and diluted in buffer solution 1:4.

Bare non-functionalized, IL-6 aptamer functionalized, and tween-20 functionalized “blocked” devices were prepared. All three batches of devices were tested with 2 μL droplets of 1 mM MgCl2 1× PBS (blank buffer solution), BSA (20 nM in buffer solution) and IL-6 target protein (1 pg to 10 ng/mL in buffer solution) individually.
For the blood experiments, two batches of devices were also prepared: IL-6 aptamer functionalized (positive control) and IgG functionalized (negative control). Both batches of devices were tested with 2 μL droplets of IL-6 spiked blood samples (10 pg to 1 ng/mL) individually.
100 mV source-drain bias and 0 V gate bias applied across the sensor and the source drain current, Ids, was monitored vs time. Two μL droplet of sample solution, 1 mM MgCl2 1× PBS, BSA, or IL-6 protein was pipetted directly into the standing 5 μL 1 mM MgCl2 1× PBS droplet on top of the devices. The change in current flow was monitored for the next three minutes. Devices were tested on a signatone probe station platform using an Agilent 4156C semiconductor parameter analyzer with a Lab View Software. The entire probe station assembly is placed on an optical table that is vibration isolated using air on all four legs. A metal box covers the entire assembly to avoid electromagnetic interference. The probes are connected to the parameter analyzer using a triaxial cable that is EM shielded. Throughout the testing the devices were maintained inside a humid chamber to prevent evaporation of the sample droplet. 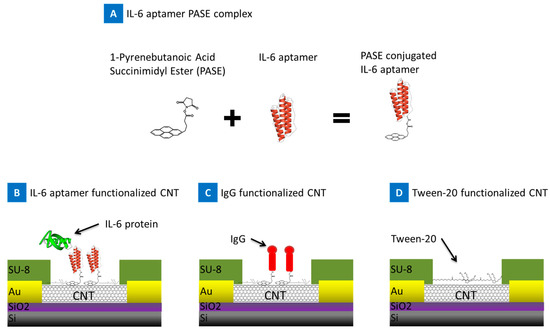 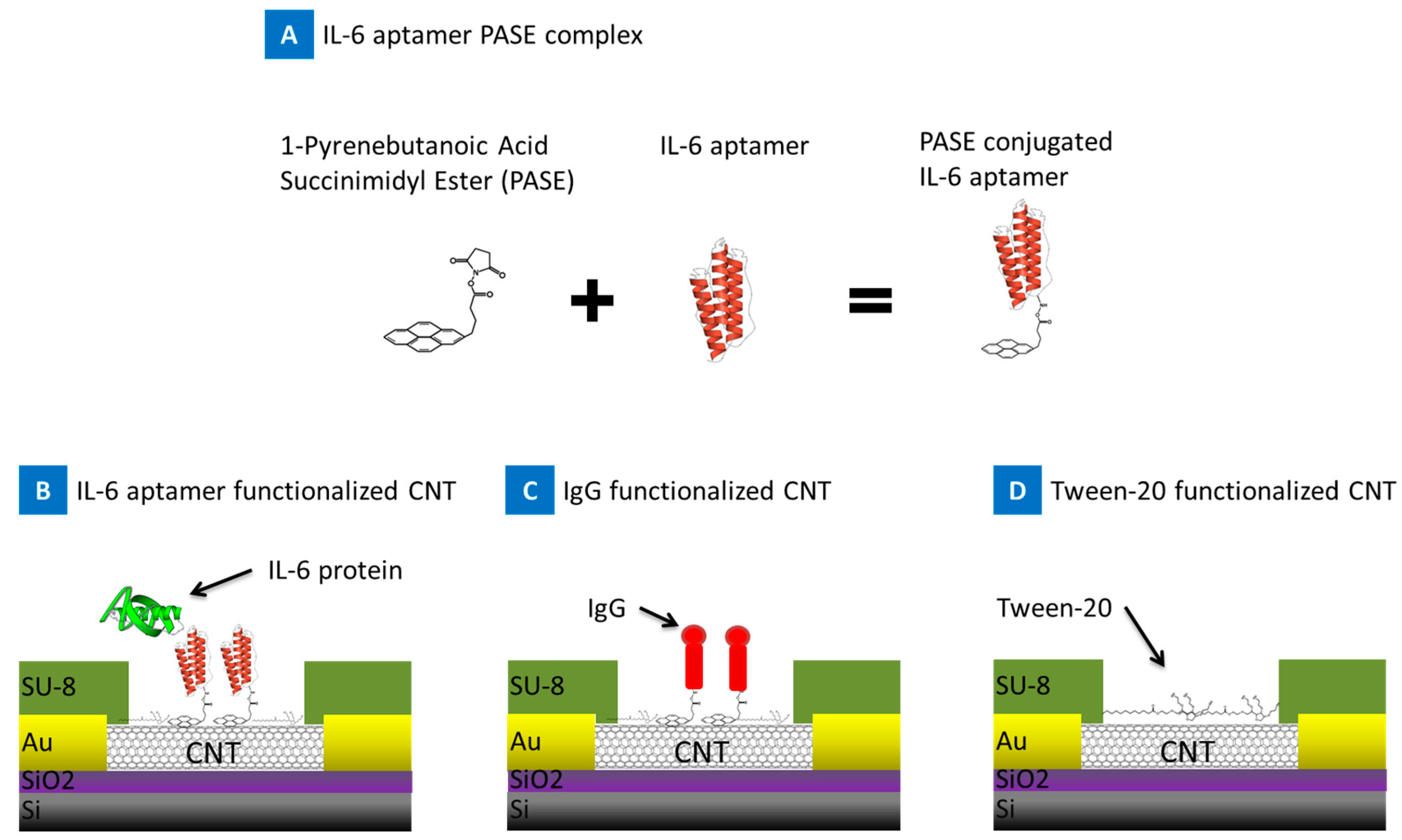 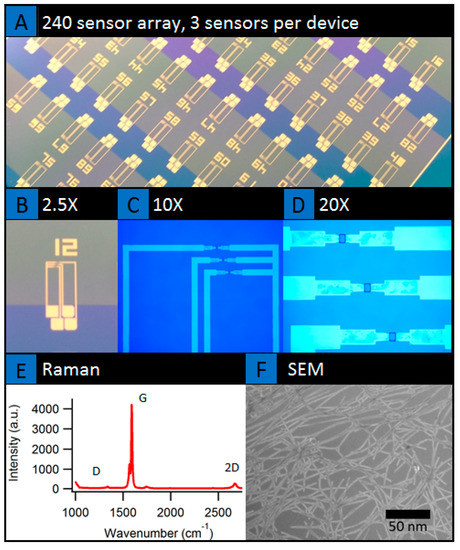 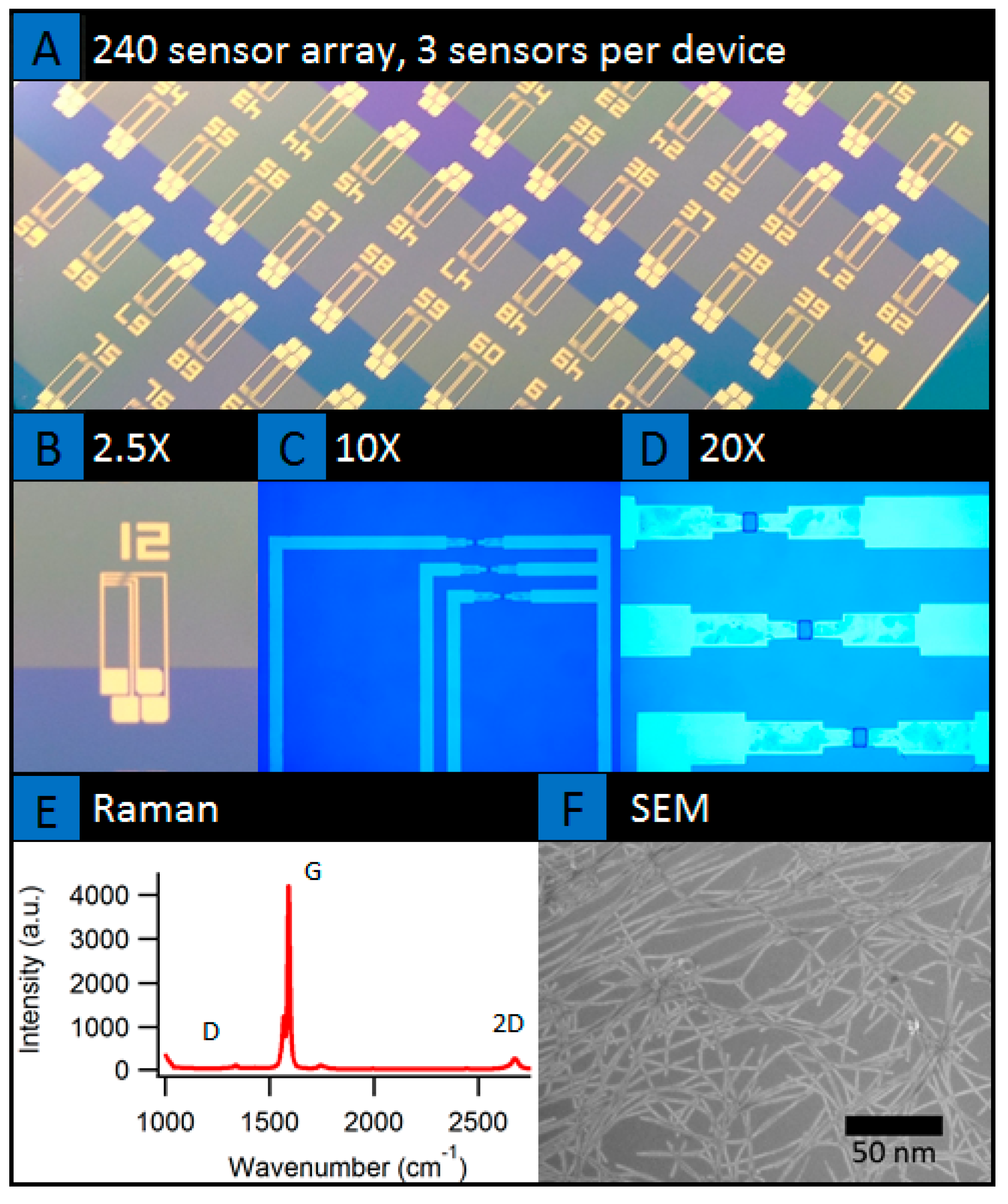 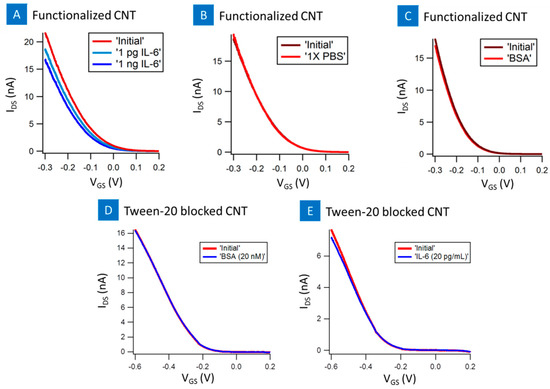