Point-of-care (POC) diagnostics enables the diagnosis and monitoring of patients from the clinic or their home. Ideally, POC devices should be compact, portable and operatable without the requirement of expertise or complex fluid mechanical controls. This paper showcases a chip-and-dip device, which works on the principle of capillary-driven flow microfluidics and allows analytes’ detection by multiple microchannels in a single microchip via smartphone imaging. The chip-and-dip device, fabricated with inexpensive materials, works by simply dipping the reagents-coated microchip consisting of microchannels into a fluidic sample. The sample is loaded into the microchannels via capillary action and reacts with the reagents to produce a colourimetric signal. Unlike dipstick tests, this device allows the loading of bacterial/pathogenic samples for antimicrobial testing. A single device can be coated with multiple reagents, and more analytes can be detected in one sample. This platform could be used for a wide variety of assays. Here, we show the design, fabrication and working principle of the chip-and-dip flow device along with a specific application consisting in the determination of β-lactamase activity and cortisol. The simplicity, robustness and multiplexing capability of the chip-and-dip device will allow it to be used for POC diagnostics.
Keywords: microfluidics; point-of-care (POC) diagnostics; β-lactamase; lab-on-a-chip; capillary-driven flow; colorimetry; optical detections; smartphone imaging; analytical chemistry microfluidics; point-of-care (POC) diagnostics; β-lactamase; lab-on-a-chip; capillary-driven flow; colorimetry; optical detections; smartphone imaging; analytical chemistry

Capillary-driven flow microfluidics is a type of microfluidics which allows fluid movements into microchannels via capillary forces and does not require internal/external expensive and complicated fluid management mechanisms [1]. This type of microfluidics has the potential to provide rapid, inexpensive and simple clinical assays in short times and near the patient. The reagents can be pre-coated on to the surface of the channels, and results are obtained via a portable detector/smartphone by merely dipping the device into the patient sample, after a short incubation. Therefore, this type of system can lead to the development of the ever-promised simple point-of-care (POC) devices sought after by the scientific community for decades [2,3].
Several capillary-driven flow devices have been developed and tested for POC diagnostics applications, such as that of Ramalingam et al. [4], who developed a numerical model to study capillary-driven flow in capillaries for polymerase chain reaction (PCR). The authors numerically modelled and tested polydimethylsiloxane (PDMS) microchips and validated the flow inside the capillaries by tracking the fluid meniscus. Capillary-driven flow devices were also fabricated [5,6] to measure the viscosity of a fluid based on capillary action in microchannels. For example, Lee et al. [5] developed a capillary-driven flow microfluidics device to measure zebrafish blood viscosity in microchannels. The method allowed the validation of the Newtonian fluid behavior and dynamic viscosity of blood, requiring a minute amount of blood from zebrafish.
In another development, PMMA was also used to develop a capillary flow device for nucleic acid biosensing applications using 500 µm-wide microfluidic channels consisting of sealed reagent-loaded pads [7]. Furthermore, capillary-driven flow microfluidics has also been developed for the measurement of biomedically relevant biomarkers [8,9,10,11,12,13]. The dynamics of open microfluidic channels has also been studied via 3D printing of microchannels for rapid prototyping and mass fabrication options [14]. Additionally, capillary flow has also been used for blood plasma separation in microfluidic channels, as reported by Madadi et al. [13], who developed a capillary flow device to separate plasma using 5 µL of sample to obtain 0.1 µL of plasma for diagnostics applications. Delamarche’s group [9,15,16] has widely developed plasma separation devices combined with immunodiagnostics devices, such as a system to detect C-reactive protein (CRP), which was quantified by using 5 µL of human serum extracted from a blood sample and 3.6 nL of a reagent solution deposited on the chip [15]. This type of device has been further developed for multiple biomedical applications such as portable bead-based and immunodiagnostics assays, with the possibility of detection via smartphones or handheld devices [16].
Glass/hydrophilic capillaries have also been used to drive flow via capillary action, as described by Lapierre et al. [17], who used bare glass capillaries to collect blood samples. In contrast, fluoropolymer microcapillaries (FEP) have been coated with reagents to render their surface hydrophilic and draw up blood or aqueous samples in a minute fraction of time [18,19,20,21,22]. Pivetal et al. [19] coated FEP capillaries with polyvinyl alcohol (PVA) to convert their surface from hydrophobic to hydrophilic and attached reagents or antibodies on the surface for the detection of protein biomarkers. The reagents reacted with the biomarkers, generating a colour or fluorescent signals which were detected under a microscope attached to a camera. Similarly, FEP microcapillaries were used to assess prostate-specific antigen (PSA) by an enzymatic reaction [20,21] and cytokines [22] within microcapillaries. The FEP microcapillaries were multiplexed in parallel by injecting solutions into 10 capillaries at the same time, i.e., a PSA standard solution, detection antibodies, the enzyme complex, washing solutions and the enzymatic substrates, which were injected in the capillaries simultaneously. The FEP microcapillaries were placed vertically in a blood sample to draw up liquid for ABO blood typing [18]. As the liquid rose into the capillaries, the reagents were released into the sample and reacted with biomarkers to produce a colour or a fluorescent signal, which was then detected by microscope or portable/smartphone systems.
Capillary-driven flow microfluidics have a great potential as POC diagnostics, for instance, for the prevention of antimicrobial resistance in healthcare [2,18]. Here, we developed a capillary-driven flow device which is simple to operate and allows loading multiple samples in a single device. In this study, the design, fabrication and working principle of the capillary-driven flow device are illustrated along with applications consisting in β-lactamase and cortisol activity assays.

3.1. Characterization of the PVA Coating in Microchannels

3.2. Characterization of Reagent Cross-Linking inside the Microchannels

The chip-and-dip device offers a simple and pump-free method to collect samples into microchannels, making it possible to perform antimicrobial resistance (AMR) testing at the point-of-care. The simple-to-operate nature of this device, its robustness and ease of operational procedures, combined with the portable/handheld detectors which facilitate the analyses can lead towards the development of point-of-care diagnostics for AMR testing in healthcare. The chip-and-dip device design, fabrication and working principle have been illustrated along with specific applications consisting of cortisol and β-lactamase assays. The chip-and-dip device works on the principle of capillary-driven flow microfluidics and allows detection by multiple microchannels in a single microchip via smartphone imaging/portable detectors. Compared to other types of devices such as dipsticks and paper microfluidic devices, our device is fabricated with cheaper materials, coated with minute amounts of reagents and offers multiplexity on a single microchip. The sample is loaded into the microchannels via capillary force, which eliminates the requirement of external/internal fluidic mechanisms or controls. The current device has the potential to be used for detecting β-lactamase-based antimicrobial resistance. Moreover, the multiplexing capability of the device can allow the quantification of specific analytes in a single microchip, which is currently being explored in our lab.

This research was performed as part of the DOSA Project (Diagnostics for One Health and User Driven Solutions for AMR, www.dosa-diagnostics.org. DOSA is funded by UK Research and Innovation/Economic Social Science Research Council, Newton Fund, and the Government of India’s Department of Biotechnology. 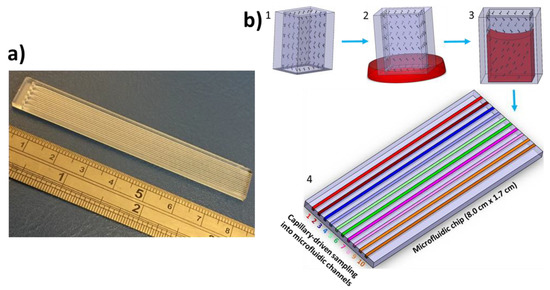 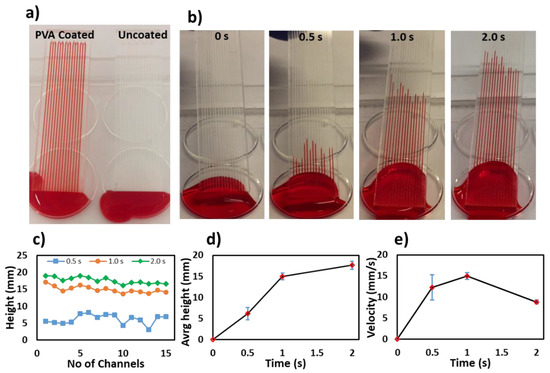 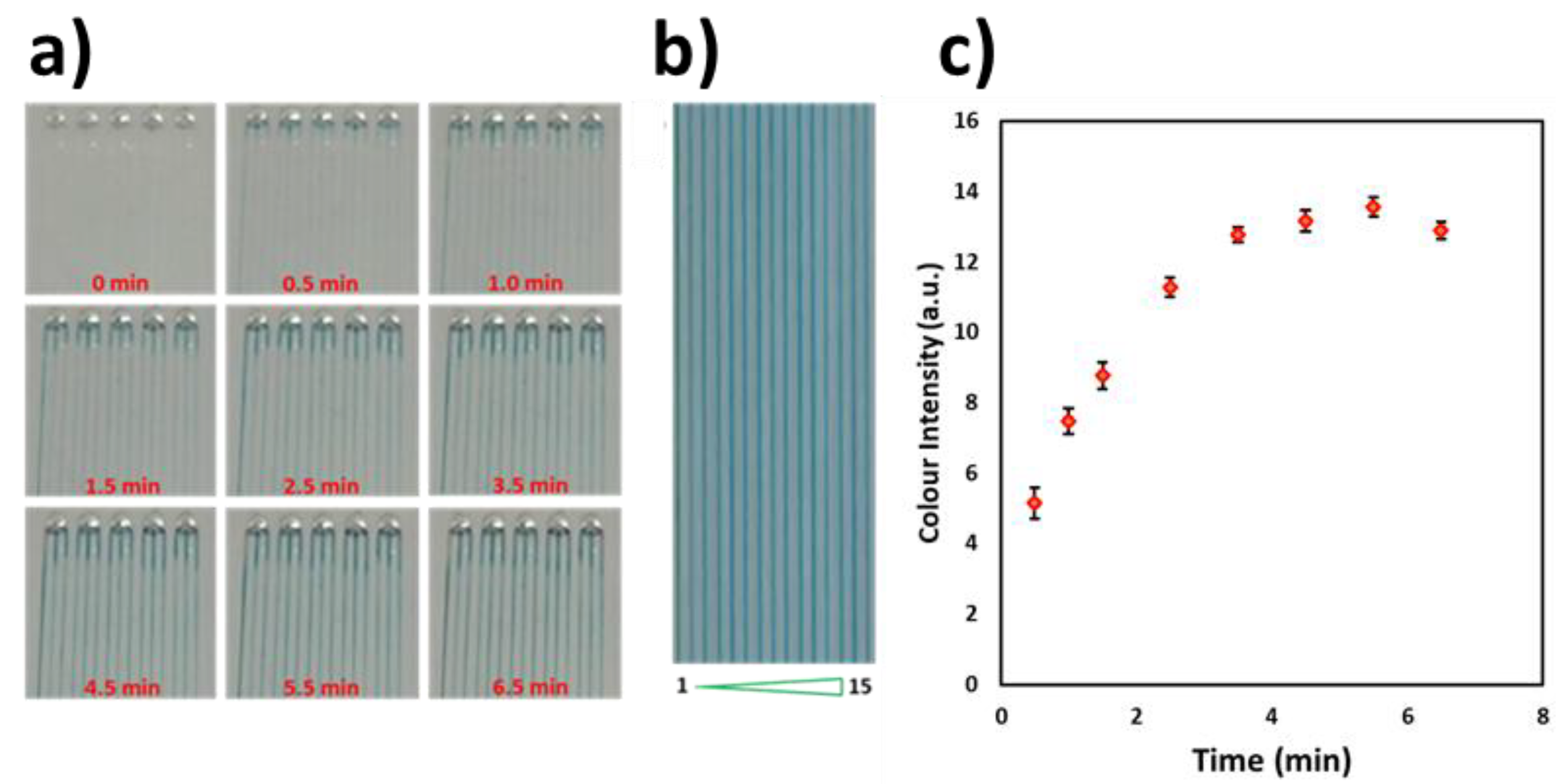