We demonstrate a facile methodology for the mass production of graphene oxide (GO) bulk-modified screen-printed electrodes (GO-SPEs) that are economical, highly reproducible and provide analytically useful outputs. Through fabricating GO-SPEs with varying percentage mass incorporations (2.5%, 5%, 7.5% and 10%) of GO, an electrocatalytic effect towards the chosen electroanalytical probes is observed, which increases with greater GO incorporated compared to bare/graphite SPEs. The optimum mass ratio of 10% GO to 90% carbon ink produces an electroanalytical signal towards dopamine (DA) and uric acid (UA) which is ca. ×10 greater in magnitude than that achievable at a bare/unmodified graphite SPE. Furthermore, 10% GO-SPEs exhibit a competitively low limit of detection (3σ) towards DA at ca. 81 nM, which is superior to that of a bare/unmodified graphite SPE at ca. 780 nM. The improved analytical response is attributed to the large number of oxygenated species inhabiting the edge and defect sites of the GO nanosheets, which are able to exhibit electrocatalytic responses towards inner-sphere electrochemical analytes. Our reported methodology is simple, scalable, and cost effective for the fabrication of GO-SPEs that display highly competitive LODs and are of significant interest for use in commercial and medicinal applications.
Keywords: graphene oxide; electroanalytical sensing; dopamine; uric acid; screen-printed electrodes graphene oxide; electroanalytical sensing; dopamine; uric acid; screen-printed electrodes

Graphene oxide (GO), a two-dimensional oxygenated carbon nanosheet, previously considered by many researchers as solely a precursor for the synthesis of graphene, possesses a number of unique chemical properties that make it a beneficial material in its own right [1,2,3]. Whilst researchers have found niche applications for GO in an array of technologies, such as hydrogen storage [4], supercapacitors [5], and biosensors [6], GO is often overlooked due to its limited application in electrically active devices/materials. This is a result of its reported high electrical resistance that stems from carboxyl, hydroxyl, and epoxy groups located on the periphery of the GO sheet [7]. It is however, these hydrophilic oxygenated functional groups which assist in biorecognition during biosensing by promoting favourable interactions with specific analytes [1,8,9,10], allowing GO to be used as the underlying electrode material for a biosensor towards a number of biological/organic molecules, such as DNA [11,12] and peptides [13]. In many cases where GO is utilised for sensing applications, it is as a component/supporting framework within a more complex catalyst [14,15]. GO’s ability to act singularly as a (bio)sensor has yet to be observed within the literature. A study by Brownson et al. [16] demonstrated that GO, when immobilised upon the surface of graphitic electrodes, exhibited intriguing electrochemical responses, with the redox probes studied giving rise to electrochemical responses dependent upon the C/O content [17]. This suggests that GO could be beneficially utilised as an electrochemical platform where oxygenated electrocatalytic reactions are involved.
In this paper, we take this prior work one-step further [17] by fabricating GO bulk-modified SPEs and explore their performance towards a range of electroanalytically interesting analytes, namely dopamine (DA) and uric acid (UA). The preferred method of detection is via electrochemical techniques, as they offer rapid, portable and low cost analysis. It is evident that the literature focuses (See Table 1) on graphene rather than GO as an electrochemical sensing platform, where the chosen nanomaterial is drop casted upon a supporting carbon electrode, allowing it to be electrochemically wired. The use of drop casting as a method to modify a supporting electrode has several drawbacks, such as the supporting electrode has to be prepared for each measurement, which can be time consuming, and the drop-casting process results in an uncontrollable distribution of the nanomaterial upon the electrode’s surface, that in turn results in poor reproducibility [18,19]. In order to overcome these issues, screen-printed electrodes (SPEs) have proven to be mass-producible electrochemical sensing platforms that offer versatility in electrode design and repeatability in the signal output [20]. The screen-printing technique can produce a vast number of SPEs that exhibit uniform heterogeneous electron transfer kinetics, thereby enabling separate electrodes to be used for independent measurements and give consistent/reliable responses. SPEs can also be readily adapted with respect to the composition of the ink utilised in their production, allowing for the incorporation of materials that alter the electrocatalytic behaviour displayed by the SPE [18].
In order to explore this principle, this paper reports the bulk modification of SPEs, with varying percentage mass incorporations of GO and electrochemically exploring the capabilities of GO bulk-modified screen-printed electrodes (GO-SPEs), in comparison to bare/unmodified SPEs, as potential electroanalytical sensing platforms towards DA and UA (separately) for the first time.

All chemicals used were of analytical grade and were used as received from Sigma-Aldrich without any further purification. All solutions were prepared with deionised water of resistivity no less than 18.2 MΩ cm–1 and were vigorously degassed prior to electrochemical measurements with high purity, oxygen free nitrogen. The GO powder utilised was commercially purchased from Graphene Supermarket [26].
Electrochemical measurements were performed using an Ivium CompactstatTM (Eindhoven, The Netherlands) potentiostat. Measurements were carried out using a typical three-electrode system, with a Pt wire counter electrode and a saturated calomel electrode (SCE) reference. The working electrodes were screen-printed graphite electrodes (SPEs), which have a 3.1 mm diameter working electrode. The SPEs were fabricated in house, the methodology of which is outlined in the electronic supporting information (ESI). Following production of the standard SPE, modification/production of the GO variation was achieved as follows: the GO powder was incorporated into the bulk graphitic ink on the basis of the weight percentage of MP to MI, where MP is the mass of particulate (in this case the GO) and MI is the mass of the ink formulation used in the printing process, i.e., % = (MP/MI) × 100. The weight percentage of MP to MI varied from 2.5%, 5%, 7.5% to 10%, resulting in 4 separate GO bespoke inks that are then screen printed upon the working area of bare SPEs; see the ESI for further details. Note, the maximum amount of GO that can be incorporated into the graphitic ink was found to correspond to 10% with any further percentage incorporation resulting in an increase in the resultant ink viscosity to where it is not screen printable via the technique used within this manuscript.
Physicochemical characterisation was performed utilising Raman spectroscopy, transmission electron microscopy (TEM), X-ray diffraction (XRD) and X-ray photoelectron spectroscopy (XPS). Details of the instrumentation utilised are reported in the ESI.

We have designed, fabricated and evaluated GO bulk-modified SPEs, which demonstrate electrocatalytic capabilities towards the sensing of DA and UA. The application of GO in this manner takes advantage of the oxygenated surface species inhabiting the edge and defect sites of the GO nanosheets to create a cheap, mass producible and tailorable sensing platform for applications requiring oxygenated electrocatalysis. Through increasing the amount of GO present (to a maximum of 10%), we observe a correlation between the number of oxygenated species and the magnitude of DA and UA electroanalytical signals.

This research was funded British Council Institutional Link grant (No. 172726574). 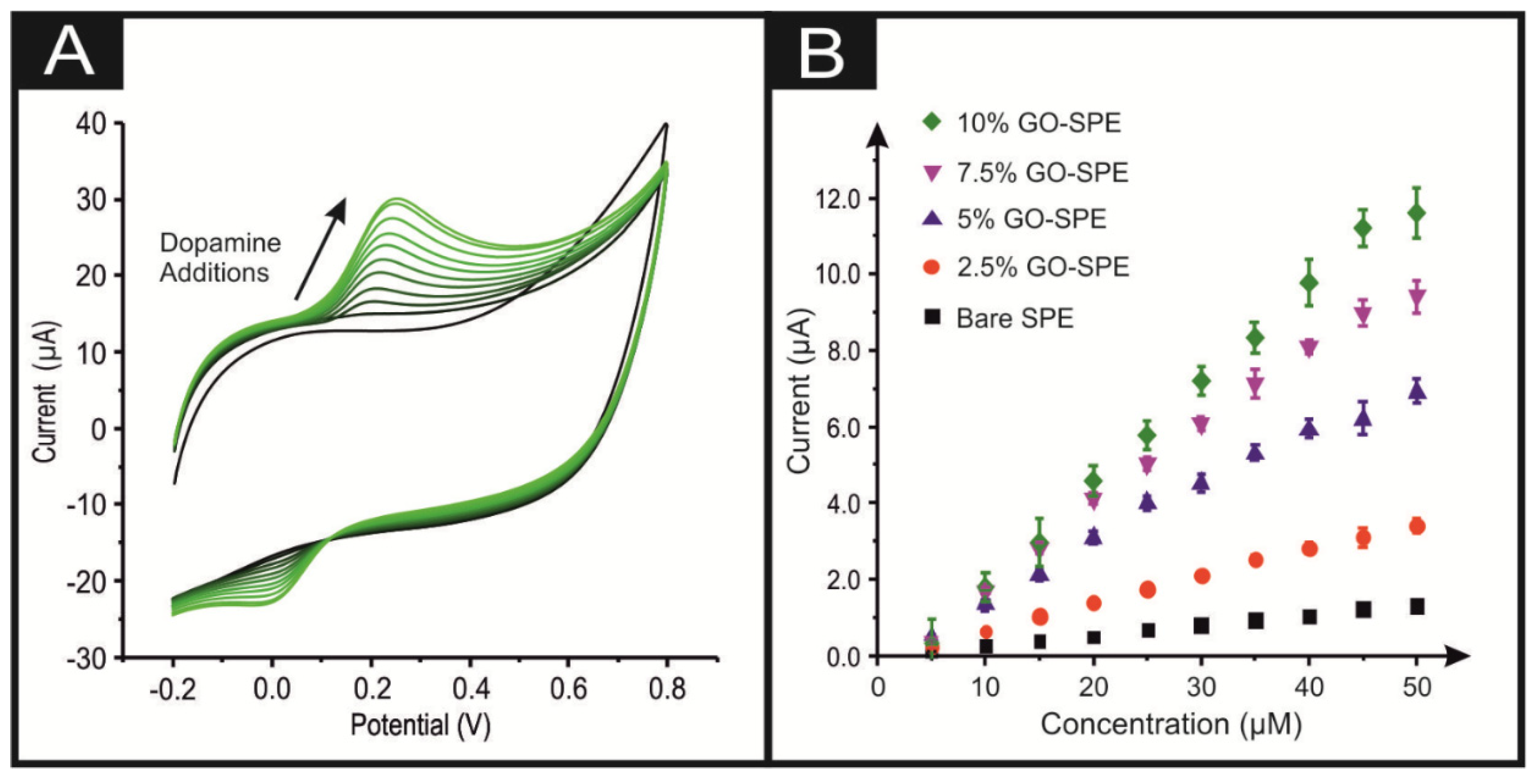 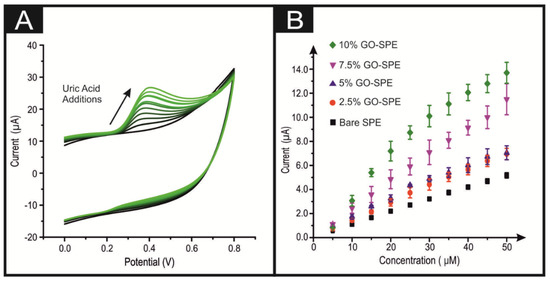