We demonstrate a facile methodology for the mass production of graphene oxide (GO) bulk-modified screen-printed electrodes (GO-SPEs) that are economical, highly reproducible and provide analytically useful outputs. Through fabricating GO-SPEs with varying percentage mass incorporations (2.5%, 5%, 7.5% and 10%) of GO, an electrocatalytic effect towards the chosen electroanalytical probes is observed, which increases with greater GO incorporated compared to bare/graphite SPEs. The optimum mass ratio of 10% GO to 90% carbon ink produces an electroanalytical signal towards dopamine (DA) and uric acid (UA) which is ca. ×10 greater in magnitude than that achievable at a bare/unmodified graphite SPE. Furthermore, 10% GO-SPEs exhibit a competitively low limit of detection (3σ) towards DA at ca. 81 nM, which is superior to that of a bare/unmodified graphite SPE at ca. 780 nM. The improved analytical response is attributed to the large number of oxygenated species inhabiting the edge and defect sites of the GO nanosheets, which are able to exhibit electrocatalytic responses towards inner-sphere electrochemical analytes. Our reported methodology is simple, scalable, and cost effective for the fabrication of GO-SPEs that display highly competitive LODs and are of significant interest for use in commercial and medicinal applications. View Full-Text
Keywords: graphene oxide; electroanalytical sensing; dopamine; uric acid; screen-printed electrodes graphene oxide; electroanalytical sensing; dopamine; uric acid; screen-printed electrodes
►▼ Show Figures 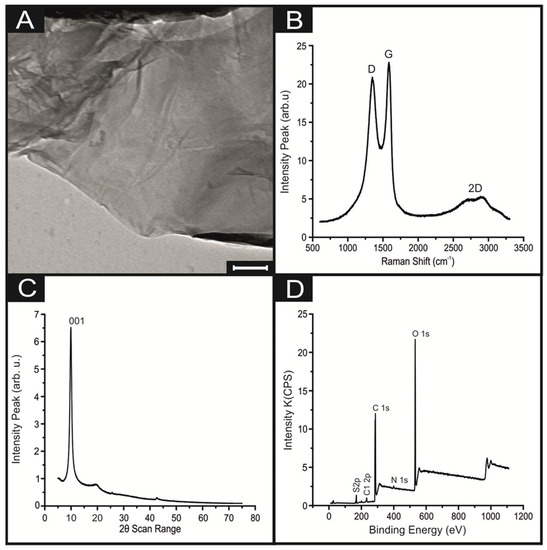