Tin oxide quantum dots (QDs) were prepared in aqueous solution from the precursor of tin dichloride via a simple process of hydrolysis and oxidation. The average grain size of QDs was 1.9 nm. The hydrothermal treatment was used to control the average grain size, which increased to 2.7 and 4.0 nm when the operating temperatures of 125 and 225 °C were employed, respectively. The X-ray photoelectron spectroscopy (XPS) spectrum and X-ray diffraction analysis (XRD) pattern confirmed a rutile SnO2 system for the QDs. A band gap of 3.66 eV was evaluated from the UV-VIS absorption spectrum. A fluorescence emission peak was observed at a wavelength of 300 nm, and the response was quenched by the high concentration of QDs in the aqueous solution. The current-voltage (I-V) correlation inferred that grain boundaries had the electrical characteristics of the Schottky barrier. The response of the QD thin film to H2 gas revealed its potential application in semiconductor gas sensors. View Full-Text
Keywords: tin oxide; quantum dot; aqueous solution; semiconductor; gas sensor tin oxide; quantum dot; aqueous solution; semiconductor; gas sensor
►▼ Show Figures 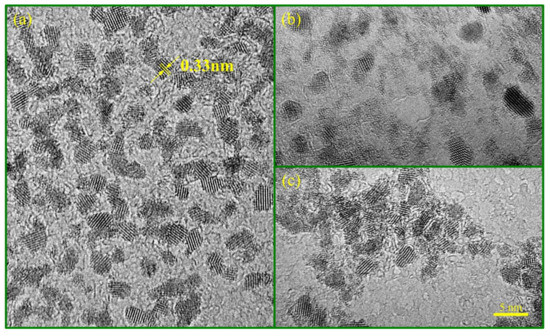