The purpose of this study is to investigate the time dependent growth of silica shells on CdTe quantum dots to get their optimum thicknesses for practical applications. The core/shell structured silica-coated CdTe quantum dots (CdTe/SiO2 QDs) were synthesized by the Ströber process, which used CdTe QDs co-stabilized by mercaptopropionic acid. The coating procedure used silane primer (3-mercaptopropyltrimethoxysilane) in order to make the quantum dots (QDs) surface vitreophilic. The total size of QDs was dependent on both the time of silica shell growth in the presence of sodium silicate, and on the presence of ethanol during this growth. The size of particles was monitored during the first 72 h using two principally different methods: Dynamic Light Scattering (DLS), and Scanning Electron Microscopy (SEM). The data obtained by both methods were compared and reasons for differences discussed. Without ethanol precipitation, the silica shell thickness grew slowly and increased the nanoparticle total size from approximately 23 nm up to almost 30 nm (DLS data), and up to almost 60 nm (SEM data) in three days. During the same time period but in the presence of ethanol, the size of CdTe/SiO2 QDs increased more significantly: up to 115 nm (DLS data) and up to 83 nm (SEM data). The variances occurring between silica shell thicknesses caused by different methods of silica growth, as well as by different evaluation methods, were discussed. View Full-Text
Keywords: quantum dots; nanoparticles; photoluminescence spectra; dynamic light scattering; scanning electron microscopy quantum dots; nanoparticles; photoluminescence spectra; dynamic light scattering; scanning electron microscopy
►▼ Show Figures 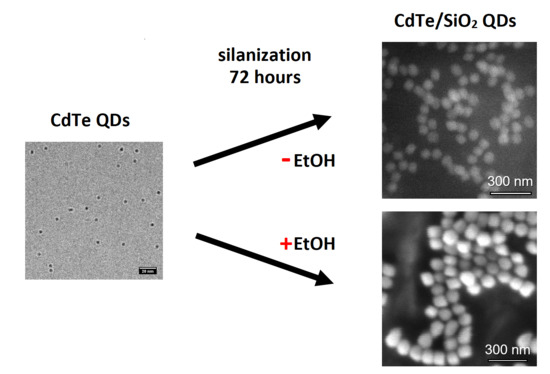