:
In this paper, we report on the realization of a highly sensitive and low cost 3D surface-enhanced Raman scattering (SERS) platform. The structural features of the Ag dendrite network that characterize the SERS material were exploited, attesting a remarked self-similarity and scale invariance over a broad range of length scales that are typical of fractal systems. Additional structural and optical investigations confirmed the purity of the metal network, which was characterized by low oxygen contamination and by broad optical resonances introduced by the fractal behavior. The SERS performances of the 3D fractal Ag dendrites were tested for the detection of lysozyme as probe molecule, attesting an enhancement factor of ~2.4 × 106. Experimental results assessed the dendrite material as a suitable SERS detection platform for biomolecules investigations in hydration conditions.
Keywords:
Ag dendrites; fractal; SERS; hydrated protein; lysozyme

Hydrofluoric acid (HF) 40% was acquired by Sigma-Aldrich (Saint Louis, MO, USA), while the used silver nitrate (AgNO3) 0.05 N was from Scharlau (Barcelona, Spain). Deionized water (18 MΩ·cm) from the Q-Millipore (Darmstadt, Germany) instrument was used for all the prepared aqueous solutions. Commercial 4″ silicon wafers, (100) orientated and n-type doped (1–5 Ω·cm) with 500 μm of thickness, were purchased from Siegert Wafer (Aachen, Germany) and used for this work. Lyophilized lysozyme and Na2HPO4 and NaH2PO4 salts for phosphate buffer saline (PBS) were acquired from Sigma-Aldrich [50].

Silver dendrites were obtain by a chemical bath in a AgNO3/HF (2:1 v/v) aqueous solution, and their morphology was later investigated with a ZEISS (Germany) Supra 25 Scanning Electron Microscope [52,53]. The filling factors, the self-similarity and scale invariance of the fractal Ag dendrites were attested by ImageJ software analyses of the SEM microscopies acquired at different magnifications [54]. The compositional characterization of the Ag dendrite platforms were obtained by energy dispersive X-ray spectroscopy (EDX) through the elicited SEM microscope equipped with an EDAX (Mahwah, NJ, USA) detector. The optical resonances of the Ag dendrites were tested by a UV-VIS Perlkin-Elmer (Waltham, MA, USA) spectrometer used in a reflectance configuration equipped with an integrating sphere.

Several solutions with different molarity concentrations of the lysozyme (Lyz) protein were prepared by dissolving a lyophilized powder of lysozyme in a 0.2 M PBS buffer solution (pH 7.2).
The Raman and SERS sensing performances of the Ag dendrite platforms were tested with a Horiba Jobin-Yvon (Kisshoin, Japan) microRaman spectrometer (HR800) equipped with a Peltier-cooled Charge-Coupled Device (CCD) detector (Synapse, Horiba (Kyoto, Japan)). The focused collection of backscattered light was performed by using a 100× (0.9 NA) objective mounted on a BX41 Olympus (Tokyo, Japan) microscope, with an incoming excitation wavelength of 633 nm from a He–Ne laser. Raman investigations were directly performed in 80 µL of a liquid solution of lysozyme in PBS at 10−2 M, held in a glass microcell (Marienfled GmbH), and covered with a microscope glass coverslip (Forlab). SERS spectra were collected on Ag dendrite substrates where a micro-droplet of protein solution at concentrations up to 10−5 M was pipetted and then left to dry in air overnight.
For all the spectra, we used the same 100× microscope objective with an integration time of 30 s, while the power intensity used was of 45 μW for SERS and 4.5 mW for Raman measurements.

The 3D platform of fractal silver dendrites was obtained through the precipitation and subsequent agglomeration of silver salts in a HF watery solution, as sketched in Figure 1.
The silicon wafers were first cleaned from organic contaminants with a 2 min of UV ozone treatments, and then they were etched in a 5% HF aqueous solution for the removal of the native oxide present onto the surface and at the end immersed in a solution containing 0.02 M of silver nitrate (AgNO3) as metal precursor and 5 M of HF diluted in deionized water.
The dendrite growth can be considered as a three steps process based on:

When above the saturation conditions, the silver salts dissociate into individual anions to form a precipitation of silver nanoparticles that are randomly distributed onto the silicon surface (Figure 1a). The additional content of silver nucleates onto the nanoparticles surfaces leads to the formation of dendritic structures to reach the equilibrium condition (Figure 1b) [34,35]. Moreover, underneath the network of silver dendrites, the chemical etching of the silicon substrate does occur at the Ag nanoparticles/Si interface due to their electronegativity difference. As a consequence of the Si etching, the formation of nanowires underneath the Ag network is also achieved during this process [54]. All the adopted etching processes were performed at room temperature for easy integration with Si standard technology.
Figure 1c shows a SEM cross-section of the network of Ag dendrites with an average thickness of 15 ± 5 μm, thus enveloping the array of Si NWs after 30 min of etching. The SEM cross section attests that a very dense carpet of Ag dendrites was obtained by this approach, resulting in a promising 3D disordered porous network of spiked metal nanostructures of great interest for SERS sensing. After their preparation, Ag dendrites were kept in a dry environment under a low vacuum condition of 10−2 mbar to prevent detrimental surface oxidation.

Upon their realization, this complex network of Ag dendrites was characterized through plan view SEM analyses captured at different magnifications of 0.5 kX, 5 kX, and 50 kX, as shown in Figure 2a–c. Indeed, from a first comparison of the three microscopies, it is possible to observe that Figure 2a is characterized by long main trunks with average diameters varying from about 1 to 3 μm that extend from 200 to 400 μm, elongating into smaller secondary or multilevel branches with lengths of about 50 μm, spaced of about 5–15 μm apart. Figure 2b,c also shows the repetition of highly-branched dendrites like those in Figure 2a, but they reported at a higher magnification scale here. This self-similar behavior that was attested over a broad length scale allowed for the investigation of the scale invariance of the system, a typical fingerprint of fractal structures as depicted by the sketch above each figure. Such fractal 3D substrates are promising for SERS investigation due to their increased surface-to-volume ratio and the enhancement of the Raman fingerprint of the target biomolecule due to hot spots formation in the nanogaps [34]. In fact, the Ag dendrites hierarchical structure could be used for efficient light trapping into micro and nanocavities with dimensions over a broad range, thus increasing the SERS detection performance and extending it for a large range of excitation wavelengths.
A critical aspect of Ag dendrites for SERS applications is the presence of surface contaminants due to their storage. Therefore, we performed EDX elemental maps and profile measurements of the stored Ag fractal samples reported in Figure 3 in order to evaluate the metal structures quality and compositions. The Si, Ag and O X-ray emission maps are displayed in green, blue and red in Figure 3b–d, respectively. From their comparison with the SEM cross-section shown in Figure 3a, it can be clearly attested that Ag dendrites were grown onto the Si substrate with good quality, and a neglectable amount of oxygen is shown, both from the Ag dendrites and the Si bulk.
To further investigate the Ag oxidation, EDX profilometry was performed along the vertical section of Ag dendrites onto the Si bulk, as sketched by the green line in Figure 3a. Indeed, the green, blue and red spectra in Figure 3e correspond to the intensity counts from the Si Kα, Ag Lα and O Kα X-ray emission lines, respectively, confirming that the presence of oxygen contamination was negligible on the as-prepared and stored samples.
We further investigated the presence of contaminations and induced oxidation in Ag dendrites as a function of time by means of UV-ozone treatments, as reported in the Supplementary Information (see Figure S1).
Figure 4 shows the plasmon properties of the Ag fractal dendrite material (in blue) compared to the optical properties of the Ag bulk continuous layer taken from reference [55,56] (in red). In particular, their apparent absorbances were obtained as log(100/R%) from the reflectance R% measurements, and the values representing the extinction signals of the samples are plotted (see Material and Methods for experimental details). In the case of Ag dendrites, an overall broad resonance, which extended to all the visible range up to the near infrared region, was observed. This broadness is typical of fractal aggregates, which, in the case of dendrites, are composed of branches with different lengths and widths that have varying gap sizes. Each length scale leads to a slightly different resonance position [27] thus, whatever the excitation wavelength in this range, it will always be possible to match a plasmon resonance condition. In particular, for the SERS experiments, we used the 633 of He–Ne laser as excitation wavelength because it is included in the broad plasmon resonance and, at the same time, allowed us to correctly measure the enhancement factor. Indeed, the evaluation of the EF implied a detectable Raman spectrum of the lysozyme in liquid as reference, and the 633 nm wavelength permitted us to observe the lysozyme Raman fingerprint in liquid, thus minimizing the fluorescence background that appeared as an easily removable plateau.

In summary, we have presented a simple chemical deposition method for the fabrication of a Ag dendrite fractal network for the SERS detection of biomolecules. The Ag dendrite fractal nanostructures exhibited a large enhancement of the Raman signatures up to 2.4 × 106. This hierarchical structure, characterized by nanocavities of various dimensions where a watery solution is likely confined, is a promising platform to study the biomolecules activity in their natural environment. 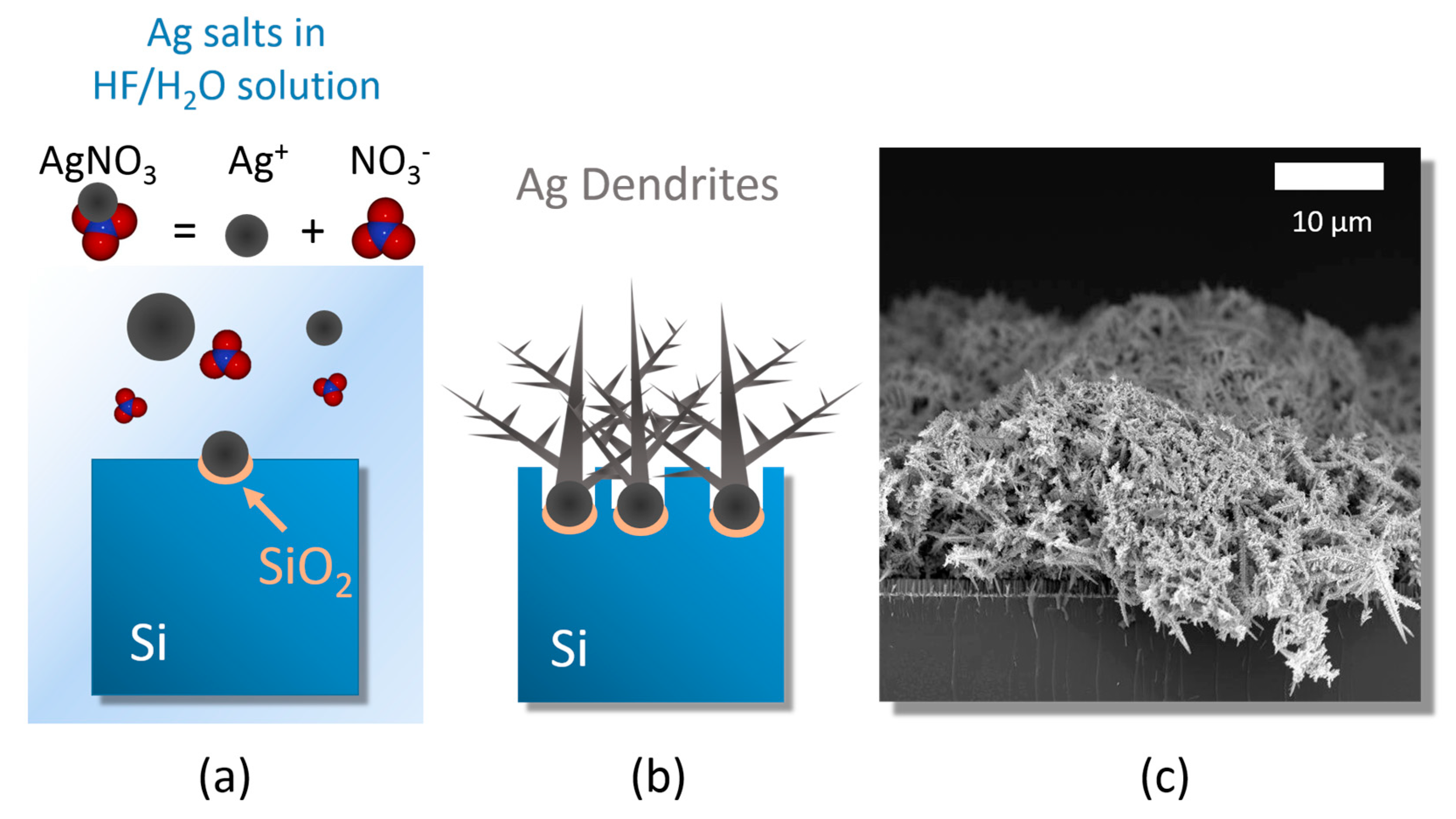 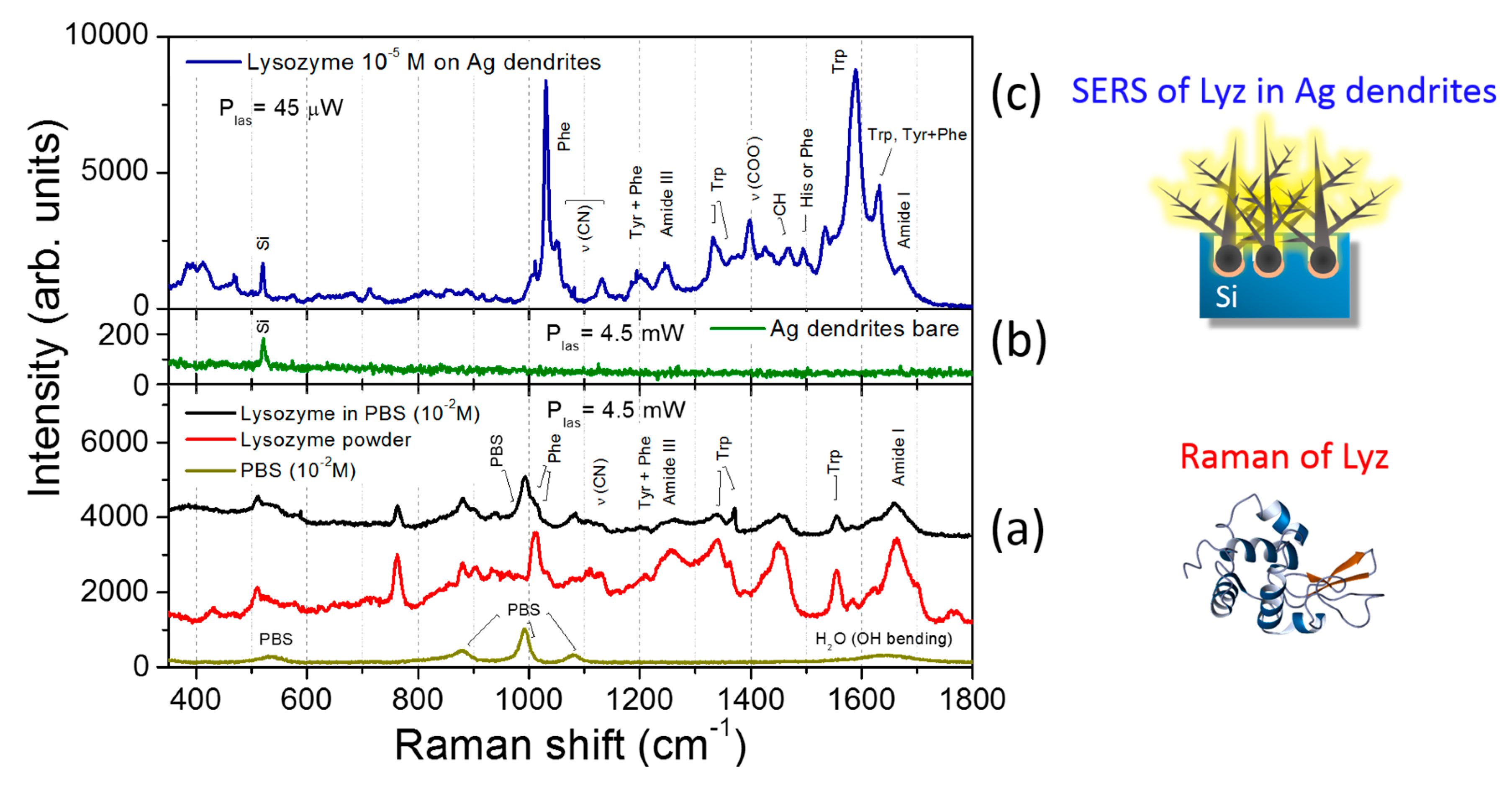