Magnetic nanofibers are of large interest for basic research of their magnetic properties as well as for possible applications in spintronics or neuromorphic computing. Several groups have investigated possibilities to prepare them. Typical methods to create magnetic nanofibers include vapor growth [1], anodizing processes [2], e-beam lithography [3], focused-ion-beam milling [4] or template-based methods [5].
Another possibility to unambiguously create nanofibers is electrospinning. This technology can be used to create nanofiber mats from different man-made polymers [6,7,8], biopolymers [9,10,11] or polymers blended with nonsolvable materials [12,13,14].
Most recently, Liu et al. showed that magnetic iron acetylacetonate could be needle-electrospun with polyacrylonitrile (PAN) dissolved in dimethyl formamide (DMF), and afterwards stabilized and carbonized, resulting in Fe3C/N-C nanofibers [15]. Na et al. created magnetic ferrite nanofibers in a polyvinyl alcohol fiber matrix and calcinated the polymer afterwards to obtain pure magnetic nanofibers [16]. Lin et al. reported about carbonized PAN/cobalt ferrite nanofibers as a catalyst [17].
Other approaches concentrate on electrospinning pure polymer nanofibers and afterwards adsorbing magnetic nanoparticles on the fiber surfaces, e.g., for magnetic hyperthermia applications [18] or electromagnetic shielding [19]. However, in this way, the magnetic nanoparticles cannot be embedded inside the nanofibers which will lead to other magnetic properties.
The magnetization dynamics and quasistatic magnetic properties of such nanofibers were investigated theoretically and experimentally by different groups [20,21,22], indicating the large influence of the material, the fiber diameter and especially the orientation with respect to the external magnetic field on their magnetic properties [23,24]. It should be mentioned that opposite to common integrated circuits, hardware for neuromorphic computing needs a certain statistic approach, suggesting that randomly oriented nanofiber mats will show more interesting properties than perfectly aligned fibers with identical diameters and without bending radii. This is why no setup was chosen in which the fibers were aligned, as discussed in diverse papers [25,26].
For their use in possible future applications in neuromorphic computing, magnetic nanofibers—which could be used to transport data in the form of domain walls moving along them—should be combined with objects that could be used to store data. Typically, memristors or other relatively complicated elements are included in such networks that are planned to be used for neuromorphic computing [27,28,29]. However, this cannot be realized in a one-step electrospinning process. The easiest approaches to realize a combination of nanofibers with a data storage opportunity by electrospinning are preparing either combinations of nanofiber mats with embedded nanomembranes, which can simply be realized by decreasing the distance between the high-voltage electrode of the electrospinning apparatus and the substrate on which the fibers are placed [30], or creating combinations of nanofiber mats with embedded beads, which happens automatically when the polymer solid content in the spinning solution is reduced, as compared to ideal values [31]. Here we report on the second method.
From simulations and experiments it is well-known that nanocylinders or beads with diameters of several hundred nm are in a so-called vortex state for small or vanishing external magnetic fields [32]. This means that the magnetization rotates in a closed loop, while it points in one of the directions perpendicular to this loop in the middle, the so-called vortex-core. This vortex core has two possible orientations and is thus often suggested as a possibility to store data. The vortex core can be switched between both orientations by short magnetic field pulses perpendicular [33,34,35] or parallel to the plane of the vortex [36]. Investigations of the static [24] and dynamic magnetization behavior of the nanofibers between the beads [37] were performed to evaluate the possibilities to switch the beads in nanofiber mats by magnetic field pulses as a prerequisite of the experimental investigations depicted here. In the results, we will show a few simulation results underlining that the beads can even be used as switches which are basic elements of logic circuits.
Magnetic nanofiber mats with magnetic beads were prepared using PAN blended with two different magnetic nanoparticles in diverse concentrations. Our results show that not only the nanoparticle concentration, but also the magnetic material influences the nanofiber mat morphology and distribution of magnetic particles.

The polymer part of the spinning solution consisted of 14% polyacrylonitrile (X-PAN, Dralon, Dormagen, Germany) dissolved in DMSO (min 99.9%, purchased from S3 chemicals, Bad Oeynhausen, Germany). This material was chosen because it can be stabilized and carbonized in future experiments to make it also conductive [38]. The following magnetic nanoparticles were added: Fe3O4 (magnetite) with particle size 50–100 nm, and Fe2O3/NiO (diiron nickel tetraoxide) with particle size < 50 nm (both purchased from Merck KGaA, Darmstadt, Germany). Both materials are known to be ferrimagnetic as bulk materials and may become superparamagnetic in small enough nanoparticles [39,40]. The polymer:nanoparticle weight ratios under examination in this study were 1:1.8, 1:1.25; 1:0.79; and 1:0.38, corresponding to the range of spinnable solutions resulting in nanofiber mats which are attracted by weak magnets. All solutions were prepared by stirring the polymer solution for 2 h on a magnetic stirrer, adding the magnetic nanoparticles and stirring manually for 10 min before the nanoparticles were dispersed in an ultrasonic bath for 40 min at 35 °C with a frequency of 37 kHz.
Nanofiber mats were created with the needleless electrospinning machine “Nanospider Lab” (Elmarco, Liberec, Czech Republic) on a polypropylene nonwoven as substrate. The function of the Nanospider is depicted in Figure 1. The following spinning parameters were used: high voltage 80 kV, nozzle diameter 0.9 mm, carriage speed 150 mm/s, ground-substrate distance 240 mm, electrode-substrate distance 50 mm, temperature in the chamber 22 °C, relative humidity in the chamber 32%. In all tests, a spinning solution of 5 mL was used which was electrospun in ~13 min.
For the optical examination of the nanofiber mats, a confocal laser scanning microscope (CLSM) VK-9000 (Keyence, Neu-Isenburg, Germany) with a nominal magnification of 2000× was used. An atomic force microscope (AFM) FlexAFM Axiom (Nanosurf, Liestal, Switzerland) as well as a scanning electron microscopy (SEM) Zeiss 1450VPSE were applied for more detailed examinations of the fiber surfaces and diameters, the latter being calculated using ImageJ 1.51j8 (from National Institutes of Health, Bethesda, MD, USA).
Micromagnetic simulations were performed using the micromagnetic solver Magpar [41], dynamically integrating over the Landau-Lifshitz-Gilbert equation of motion. The simulation parameters are: magnetic field rotation frequency = 0.5 GHz, rotating field amplitude B = 1 T; static field amplitude 0 T or 0.1 T; anisotropy constants K1 = K2 = 0, saturation polarization JS = 1.0053 T, effective exchange constant A = 1.3·10−11 J/m, Gilbert phenomenological damping constant α = 0.02 (all values similar to permalloy material parameters). The simulated geometry is depicted in Figure 2.

Nanofiber mats were electrospun from polyacrylonitrile blended with different magnetic nanoparticles in various weight ratios. Optical and atomic force microscopic investigations reveal that even in the nanofiber mats with the highest amounts of nanoparticles which could be electrospun without problems, the nanoparticles were completely embedded in the nanofibers. While avoiding undesired agglomerations was often reported in the literature as only possible by chemical modifications of the nanoparticles, here a simple mechanical dispersion by ultrasonic treatment was shown to be sufficient. The beads, which are avoided in many other studies, but are necessary for the planned application of our magnetic nanofiber mats for data storage and processing, were filled with nanoparticles, as desired, without showing protruding nanoparticles. Our study shows that in this way, magnetic nanofiber mats—including beads with different magnetic properties—can be created unambiguously in a one-step electrospinning process.

This work was supported by Volkswagen Foundation grant “Adaptive Computing with Electrospun Nanofiber Networks” no. 93679.

We acknowledge the financial support of the German Research Foundation (DFG) and the Open Access Publication Fund of Bielefeld University of Applied Sciences for the Article Processing Charge. 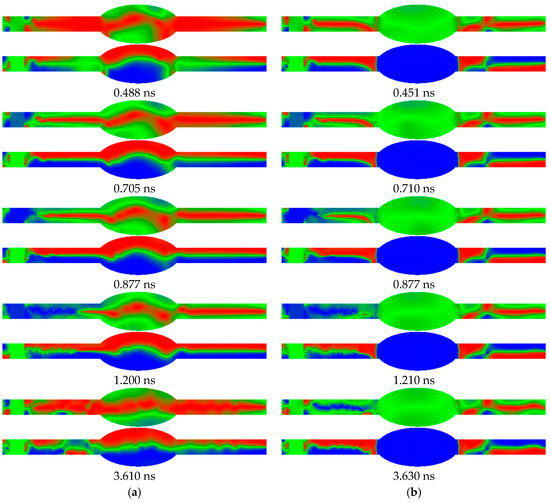 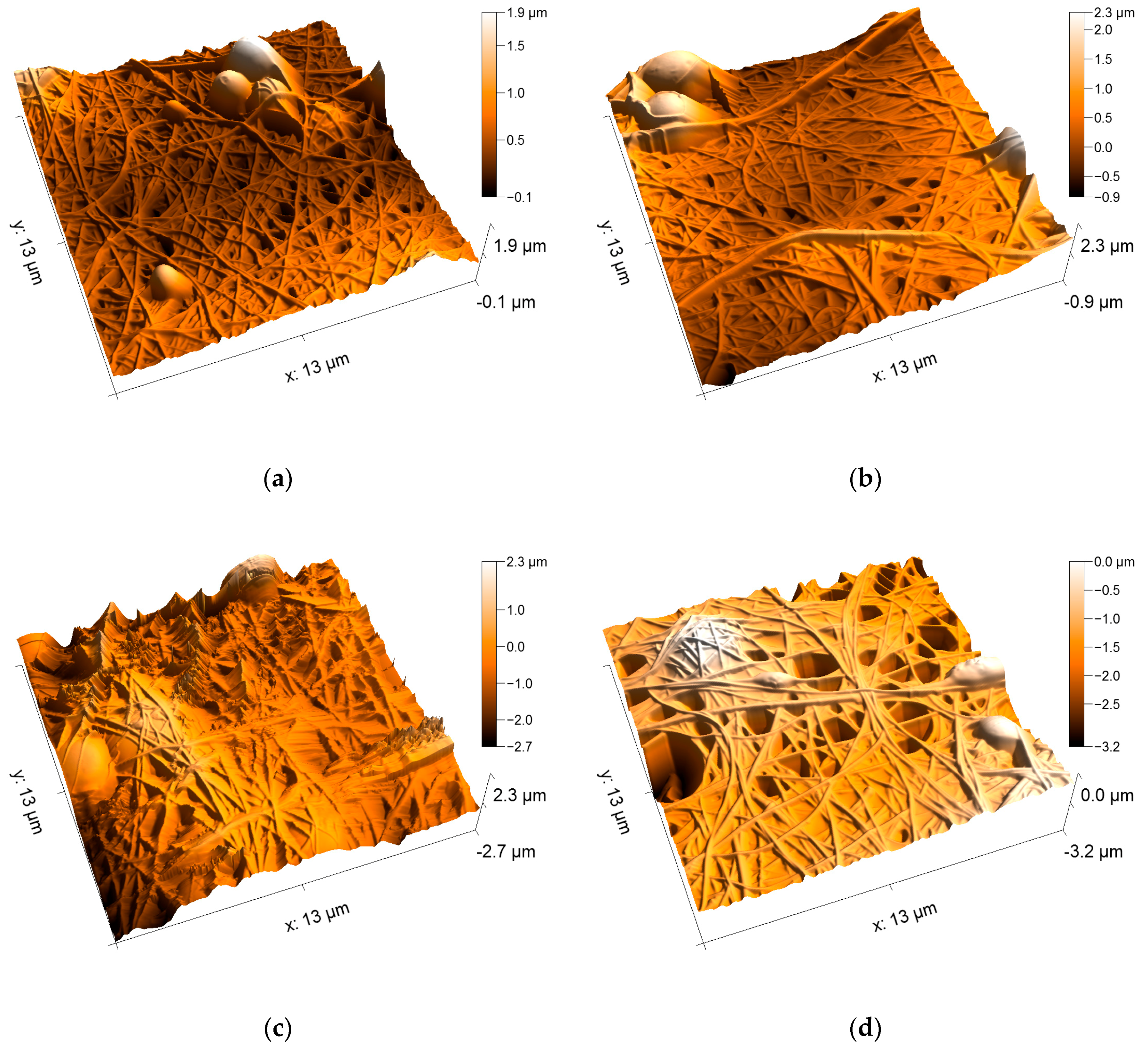