The PVDF–BTO composite films were prepared based on mixing, spin-coating, firing, and corona poling processes, as schematically shown in Figure 1a. Commercially available PVDF powder was dissolved in a dimethylformamide (DMF) solvent, and various amounts of BTO NPs were added to the PVDF solution. Ultrasonication was used to thoroughly mix and prevent the aggregation of the BTO NPs. A small aliquot of the PVDF–BTO solution was spin-coated on an Au-coated polyimide (PI) substrate (thickness ca. 150 μm) at the speed of 2000 rpm for 30 s. After the spin-coating, the PVDF–BTO solution was heated at 200 °C for 12 h to evaporate the solvent and crystallize. The PVDF–BTO film was corona-poled to align the ferroelectric, hence piezoelectric, domains in one direction. The corona poling was done by applying a high direct-current (DC) voltage (6 kV) to a needle that was 0.5 cm away from the PVDF–BTO film. The PVDF–BTO film was maintained at 100 °C, and the voltage was applied for 2 h. In contrast to conventional metal contact poling, the ionized particles in the air are accelerated and deposited on the composite during the coronal poling [14]. The ionized particles remain, and can stabilize the electric polarization of the composite based on Gross’s two-charge theory [15,16].

The phase purity and crystalline quality of the PVDF–BTO composites were investigated by X-ray diffraction (XRD) using Cu Kα radiation. The surface profile and distribution of the BTO NPs in a composite were examined using a field-emission scanning electron microscope (FE-SEM) (S-4200, Hitachi, Tokyo, Japan) equipped with energy-dispersive X-ray (EDX) mapping. The Young’s modulus and dielectric constant were obtained using an atomic force microscope (AFM) and an LCR meter, respectively.

An Au-coated PI film electrode was attached to the upper surface of a corona-poled PVDF–BTO film. The thickness of the top electrode (ca. 75 μm) was less than that of the bottom PI film (ca. 125 μm). A PVDF–BTO composite-based PENG was mounted on a custom-designed mechanical bending system, in which a linear motor was used to periodically apply and release compressive forces to the PENG. The electrical outputs of the PENG were recorded by low-noise voltage and current preamplifiers. All of the electrical measurements were conducted in a Faraday cage to minimize noise.

COMSOL Multiphysics software (Version 5.2a, COMSOL, Burlington, MA, USA) was used to simulate the strain in a PVDF–BTO composite. Due to computational limitations, only a small volume of ca. 3.375 μm3 was defined. The embedded BTO NPs (ca. 75 nm in diameter) were arranged in a regular array to emulate a perfectly mixed composite with an equivalent concentration of 10 wt%. The block was anchored on one side and subjected to a strain of 3.2% on the other side by means of a prescribed displacement. The bottom electrode was grounded, and the top electrode was considered a floating potential surface. 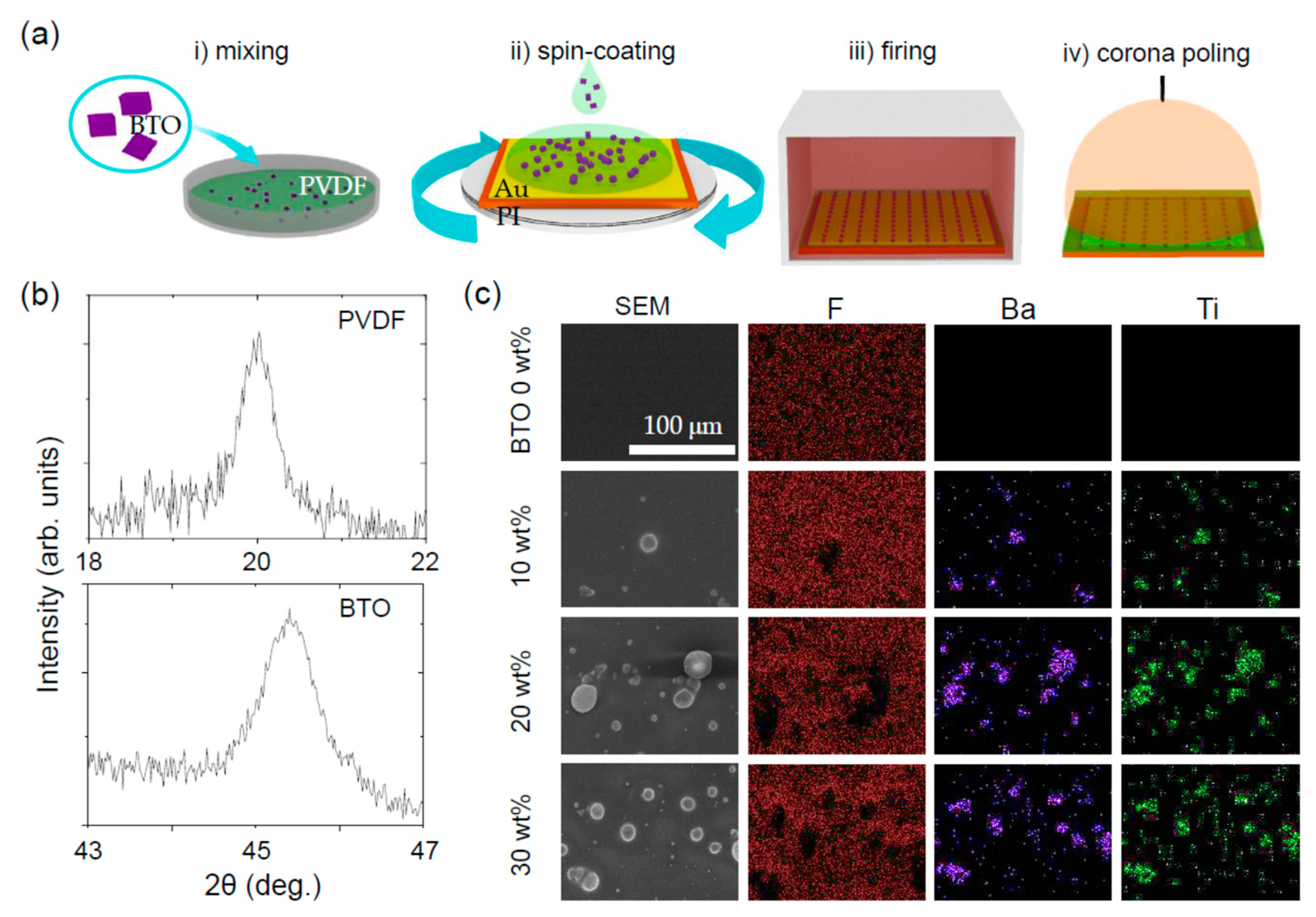 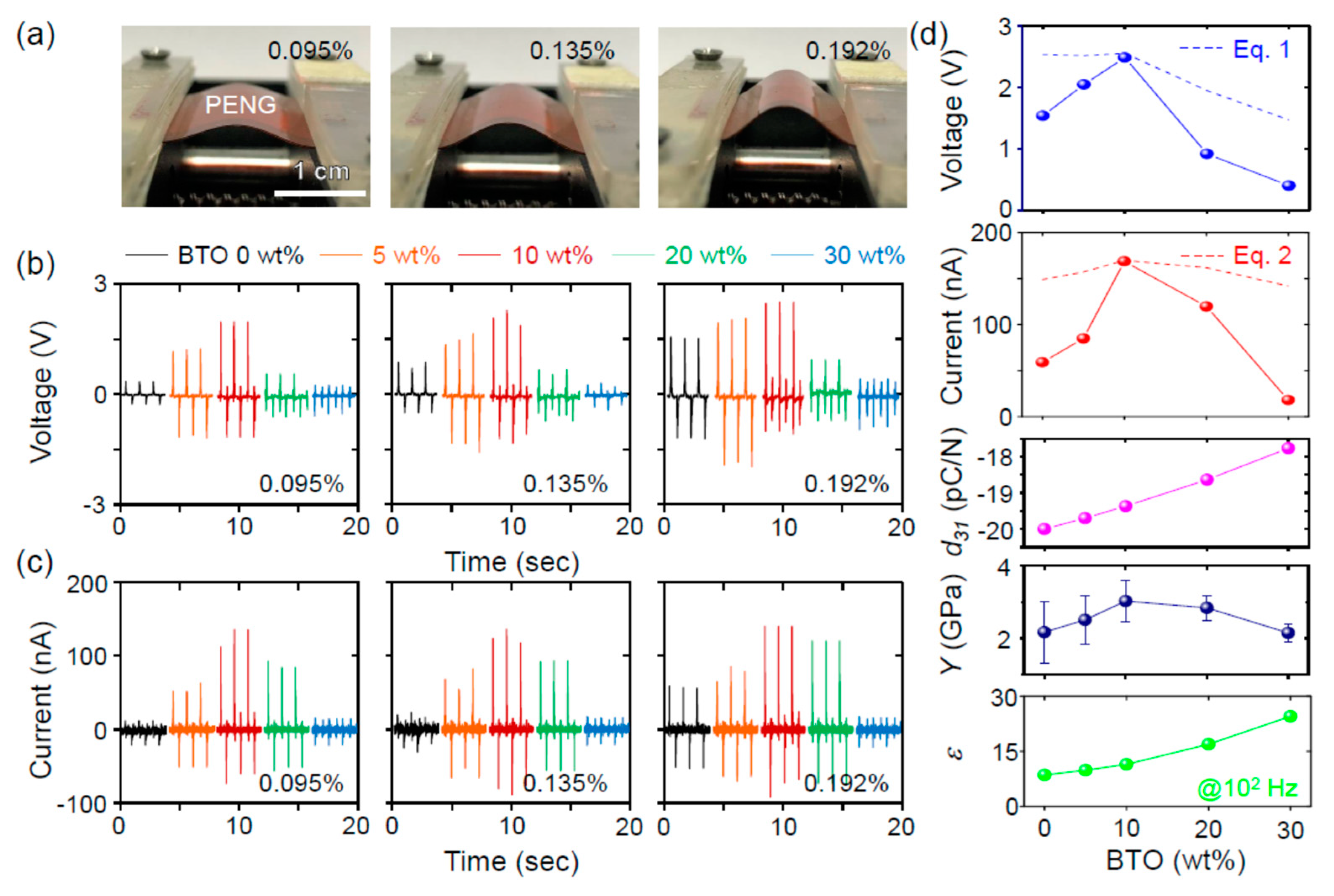