With the growth of the global economy and population, the demand for energy is increasing sharply. The development of environmentally a benign and reliable energy supply is very important and urgent. Single-walled carbon nanohorns (SWCNHs), which have a horn-shaped tip at the top of single-walled nanotube, have emerged as exceptionally promising nanomaterials due to their unique physical and chemical properties since 1999. The high purity and thermal stability, combined with microporosity and mesoporosity, high surface area, internal pore accessibility, and multiform functionalization make SWCNHs promising candidates in many applications, such as environment restoration, gas storage, catalyst support or catalyst, electrochemical biosensors, drug carrier systems, magnetic resonance analysis and so on. The aim of this review is to provide a comprehensive overview of SWCNHs in energy applications, including energy conversion and storage. The commonly adopted method to access SWCNHs, their structural modifications, and their basic properties are included, and the emphasis is on their application in different devices such as fuel cells, dye-sensitized solar cells, supercapacitors, Li-ion batteries, Li-S batteries, hydrogen storage, biofuel cells and so forth. Finally, a perspective on SWCNHs’ application in energy is presented. View Full-Text
Keywords: single-walled carbon nanohorn; fuel cell; solar cell; biofuel cell; Li-ion batteries; supercapacitor; hydrogen storage single-walled carbon nanohorn; fuel cell; solar cell; biofuel cell; Li-ion batteries; supercapacitor; hydrogen storage
►▼ Show Figures 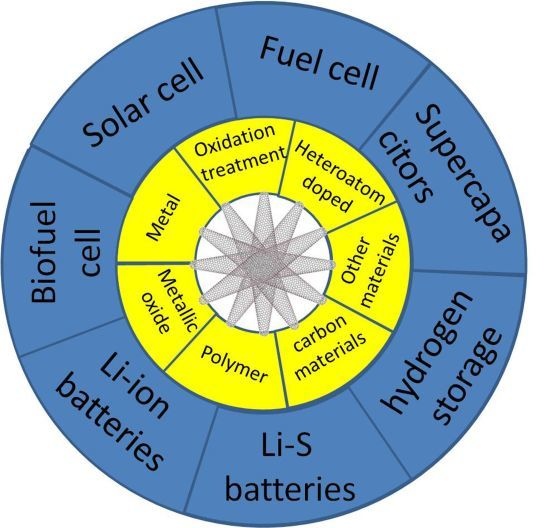