:
This research investigates the two different hybrid nanofluid flows between two parallel plates placed at two different heights, and , respectively. Water-based hybrid nanofluids are obtained by using , and as nanoparticles, respectively. The upper-level plate is fixed, while the lower-level plate is stretchable. The fluid rotates along the y-axis. The governing equations of momentum, energy and concentration are transformed into partial differential equations by using similarity transformations. These transformed equations are grasped numerically at MATLAB by using the boundary value problem technique. The influence of different parameters are presented through graphs. The numerical outcomes for rotation, Nusselt, Prandtl, and Schmidt numbers are obtained in the form of tables. The heat transfer rate increases by augmentation in the thermophoresis parameter, while it decays by increasing the Reynolds number. Oxide nanoparticles hybrid nanofluid proved more efficient as compared to mixed nanoparticles hybrid nanofluid. This research suggests using oxide nanoparticles for good heat transfer.
Keywords:
rotational system; porous surface; hybrid nanofluid; heat source/sink; magneto hydrodynamic; radiation; chemical reaction

Suppose a rotating three-dimensional, steady, incompressible, and electrically conducting hybrid nanofluid flow between two permeable parallel plates. The cartesian coordinate system is considered to understand the problem as the y-axis is perpendicular to the x-axis and the z-axis is perpendicular to both axes. The lower level is placed at a height and upper-level plate at a height The lower-level plate is being stretched with rate , i.e., proportional to the applied equal and opposite forces maintaining the origin of plates fixed. A uniform magnetic field is applied parallel to y-axis in which fluid is rotating. Two different namely -water and -water hybrid nanofluids are considered for comparison. The heat sink/source, chemical reaction, mixed convection, thermophoresis, and Brownian motion are considered to investigate the effects on different profiles. The governing equations have the following form:
Continuity Equation:
Momentum Equations:
Energy Equation:
Concentration Equation:
Here, and are velocity components in and directions, respectively, the parameters are all defined in the nomenclature section. The missing term in Equation (4) shows that there is a net cross-flow along the z-axis The Rosseland thermal radiation approximation relation is defined as Where . describes the Stefan–Boltzmann constant, and presents absorption coefficient. The temperature difference is assumed to be very small, and Taylor’s series expansion of in terms of will truncate the temperature to . Thus, using this truncated form will provide us with the following simplified form:
The corresponding boundary conditions are:
Similarity Transformation:
The following similarity transformation is utilized to convert leading equations into a set of ordinary differential equations.
The differentiation is with respect to
Transformed Governing Equations:
The flow governing equalities of continuity, momentum, energy and concentration takes the following form after employing the similarity transformation. The continuity equation is identically satisfied, and the remaining are:
By removing the pressure gradient term from above mentioned Equations (10) and (11) reduced to
Here, is a constant. Afterwards, differentiation Equation (13), with respect to , takes the form:
So, the leading equations of momentum/velocity of the current problem take the following form:
The Roseland approximation in the energy equation for radiative heat flux [19] is defined as:
Here, is he Stefan–Boltzman constant and is the absorption coefficient. Taking into consideration the minimal difference of the temperature, the Taylor series expansion for in terms of, can be written as follows:
Energy equality takes the form by utilizing the definition of heat flux:
Similarly, the following form (dimensionless) takes the concentration Equation (6):
The transformed boundary conditions are:
The is a dimensionless suction/injection parameter.
The dimensionless quantities magnetic field, porosity, mixed convection, Prandtl number, Schmidt number, Reynolds number, radiation, Brownian motion, thermophoresis, radiation, heat source/sink, chemical reaction and constants for hybrid nanofluid are defined below as:
Quantities of Physical Interest:
The skin resistance coefficient along the stretchable wall is the physical quantity of concern in this problem, this one is defined as
Here, indicates the shear tension or skin friction along the stretched wall, and is defined as
The dimensionless form is:
Here and.
The temperature field can be used to compute the Nusselt number (dimensionless) for the temperature transference constant at the surface: or
The concentration field can be used to compute the non-dimensional form of the mass transfer coefficient at the sheet in terms of the Sherwood number:

Figure 1b shows the complete algorithm of the solution. The boundary value problem technique is used to tackle the system of nonlinear ODE1a Equations (15), (16), (19) and (20) with boundary conditions Equation (21) at MATLAB. The advantage of this technique is that it is easy to use, time-saving and provides accurate outcomes. The complete methodology provides insight into how to collect the data, data processing and analysis of the obtained outcomes. The following steps illustrate the complete methodology:
These equalities are converted to first-order linear equalities with the help of the following newly defined variables. Asymptotic behavior is gained by setting the solution tolerance rate up to and using appropriate initial guesses:
The Equations and takes the following form:
The boundary condition is in the following form:
The skin frictions, Nusselt and Sherwood numbers take the form
The obtained results show the impact on different profiles. The solution is compared with the literature in Table 1. Thermophysical relations and properties are presented in the following Table 2 and Table 3, respectively.

This research article investigates the 3D mixed convection oxide nanoparticles hybrid nanofluid and mixed nanoparticles hybrid nanofluid flow in a permeable rotating system under the influence of a magnetic field and heat source/sink. The governing equationsare transformed into ordinary differential equations by using similarity transformations. The boundary value problem technique is used to tackle the transformed governing equations at MATLAB by setting the solution tolerance rate 10−6. Graphs and tables are used to present the obtained outcomes. The major outcomes of this comparative research are listed below for velocity, concentration, temperature, Nusselt number and Sherwood number.

All data relevant to the research is included in the manuscript.

Authors declare no conflict of interest exists for this study.

In this research, two different hybrid nanofluid flows are discussed with different assumptions. The major outcomes are found to have a high Nusselt number and reduced skin friction for oxide nanoparticles hybrid nanofluids. Such hybrid nanofluids can be used in chemical engineering, electronic devices, etc., and in the future, advances in such types of research can be achieved to enhance the performance. 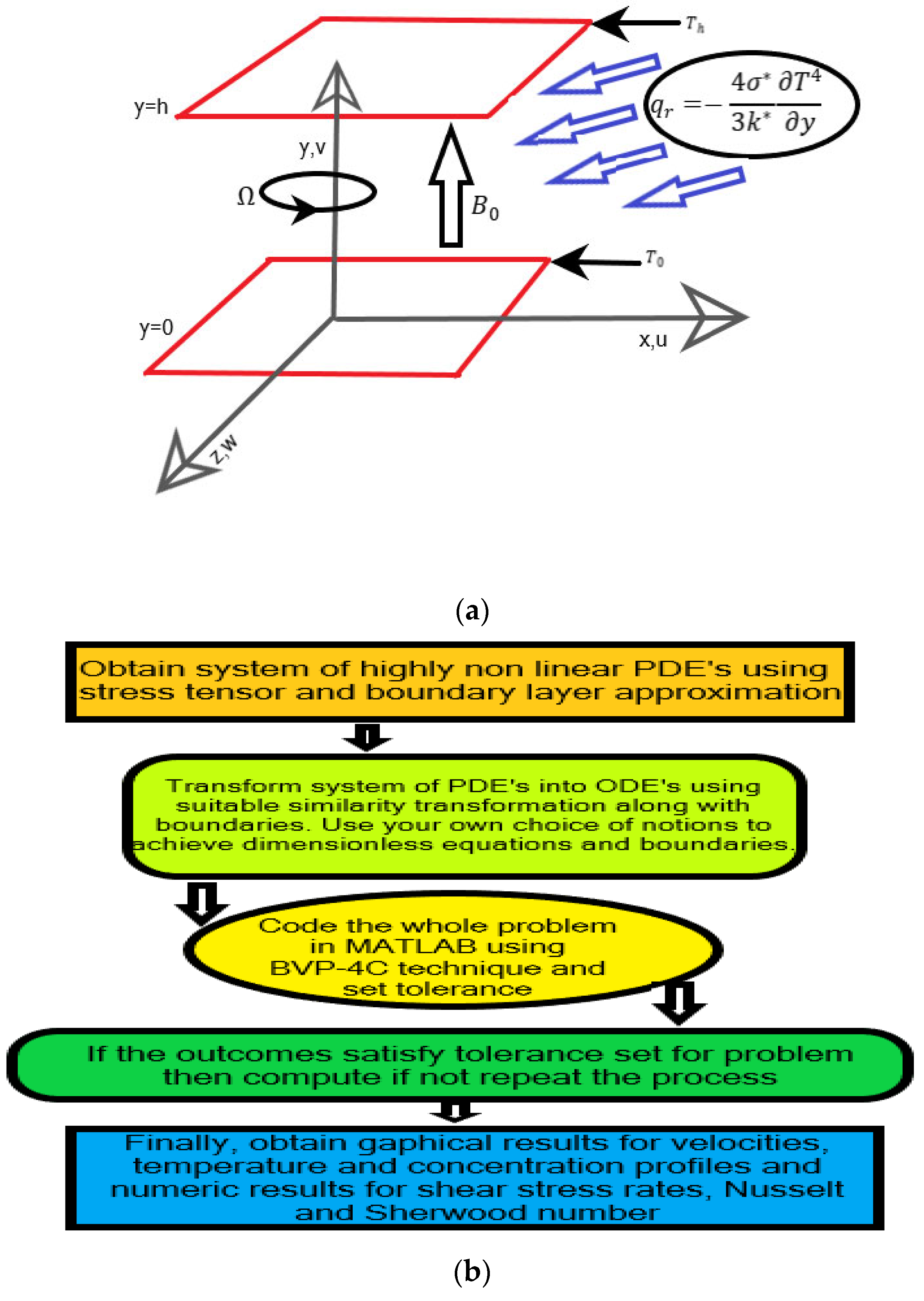 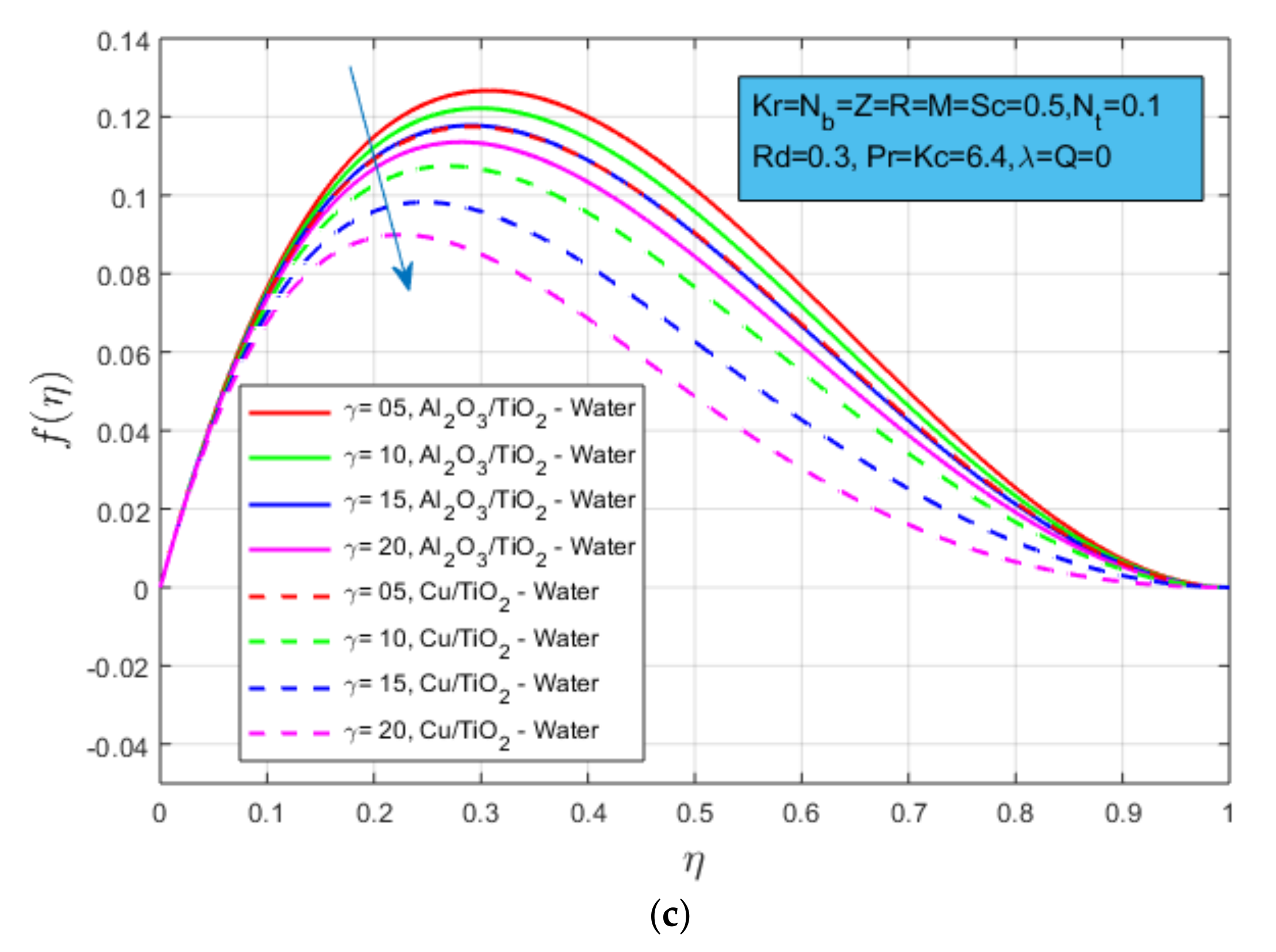 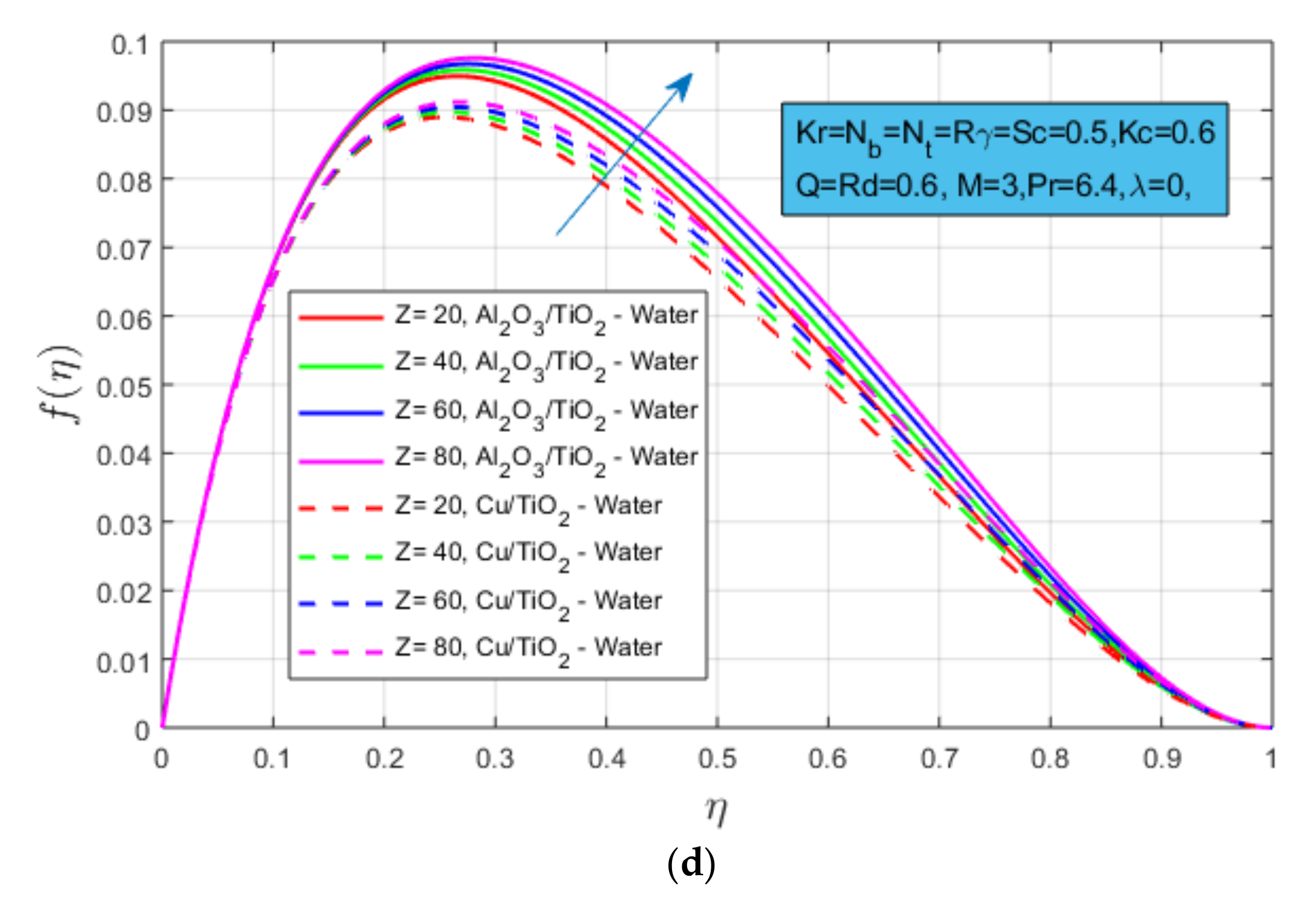 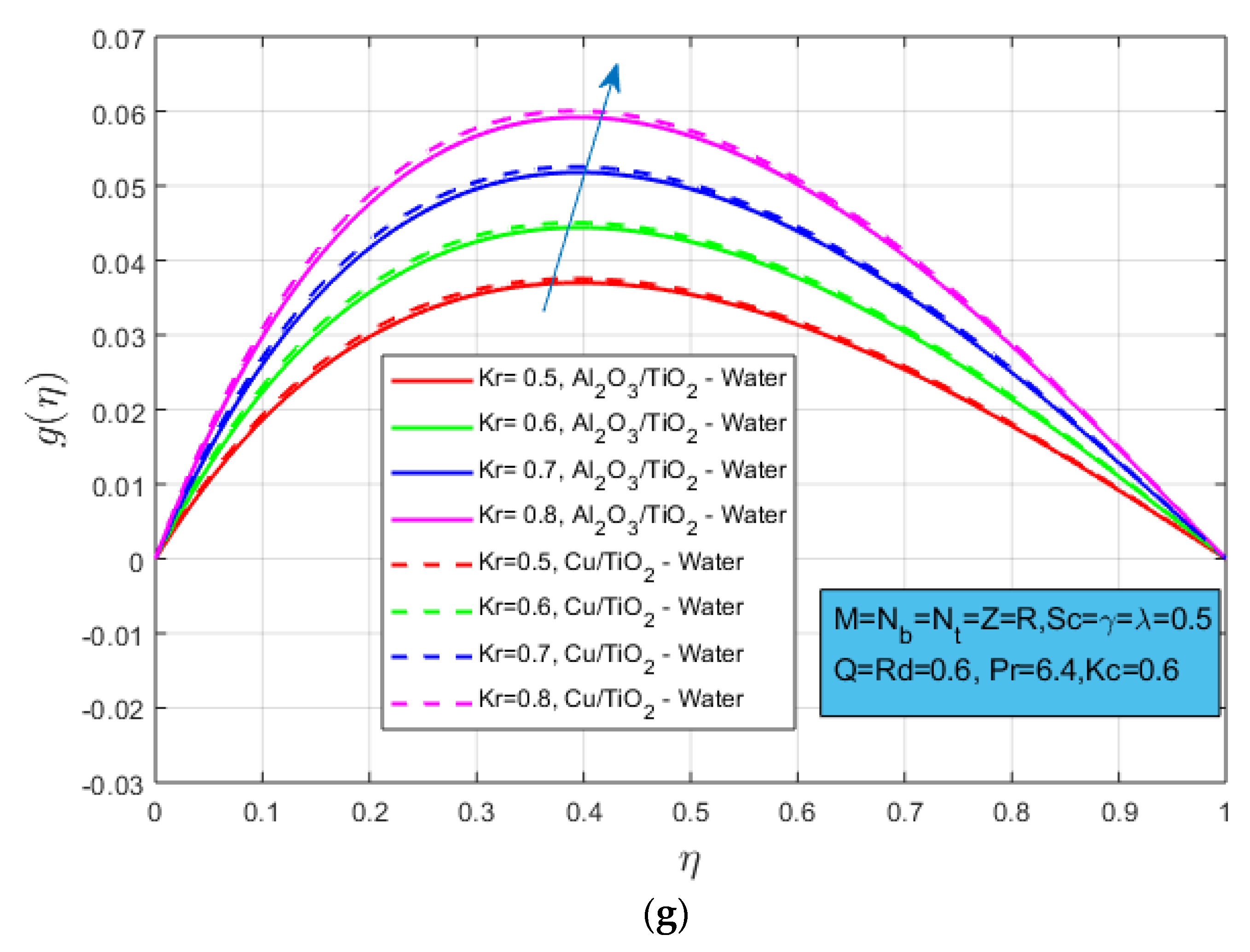 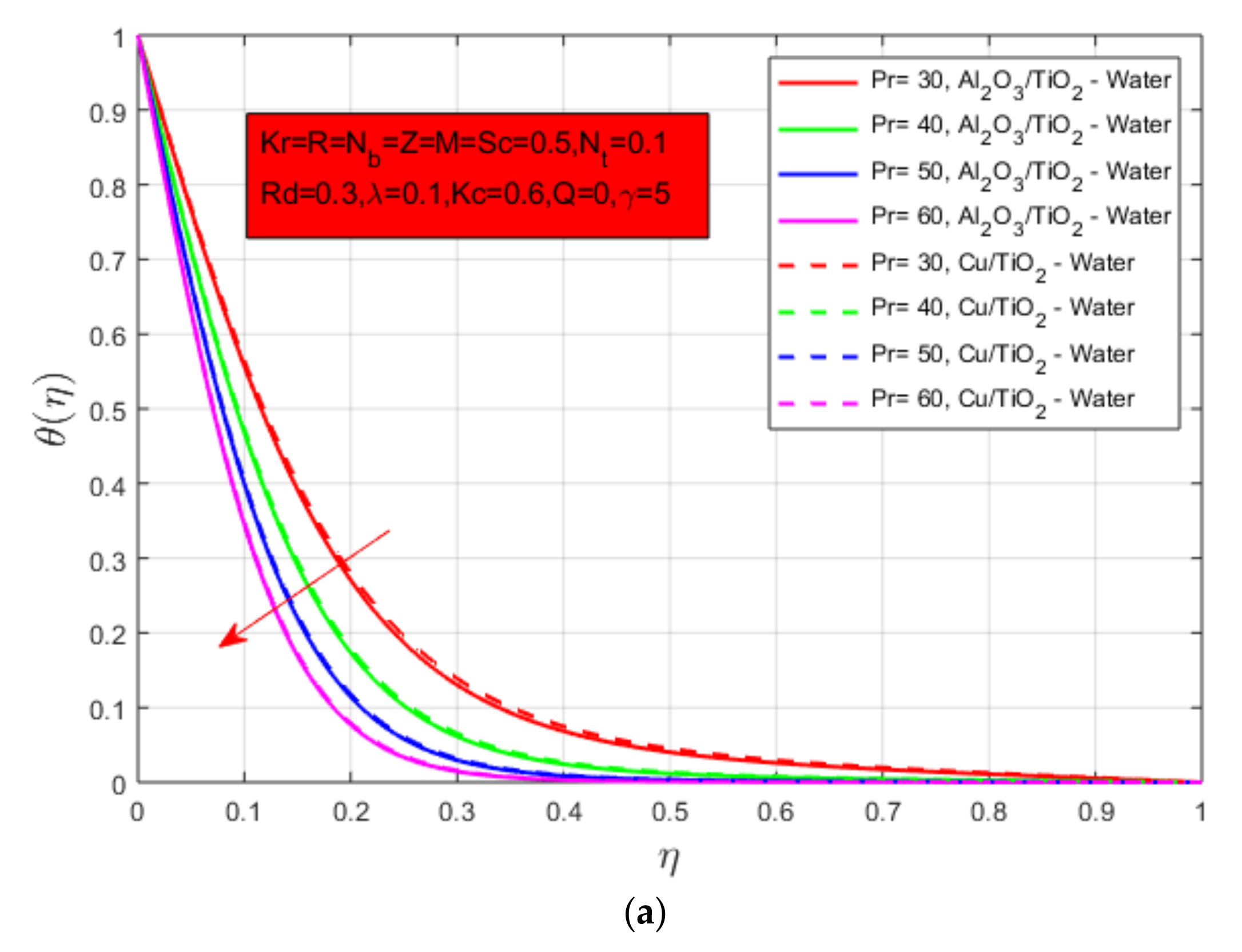 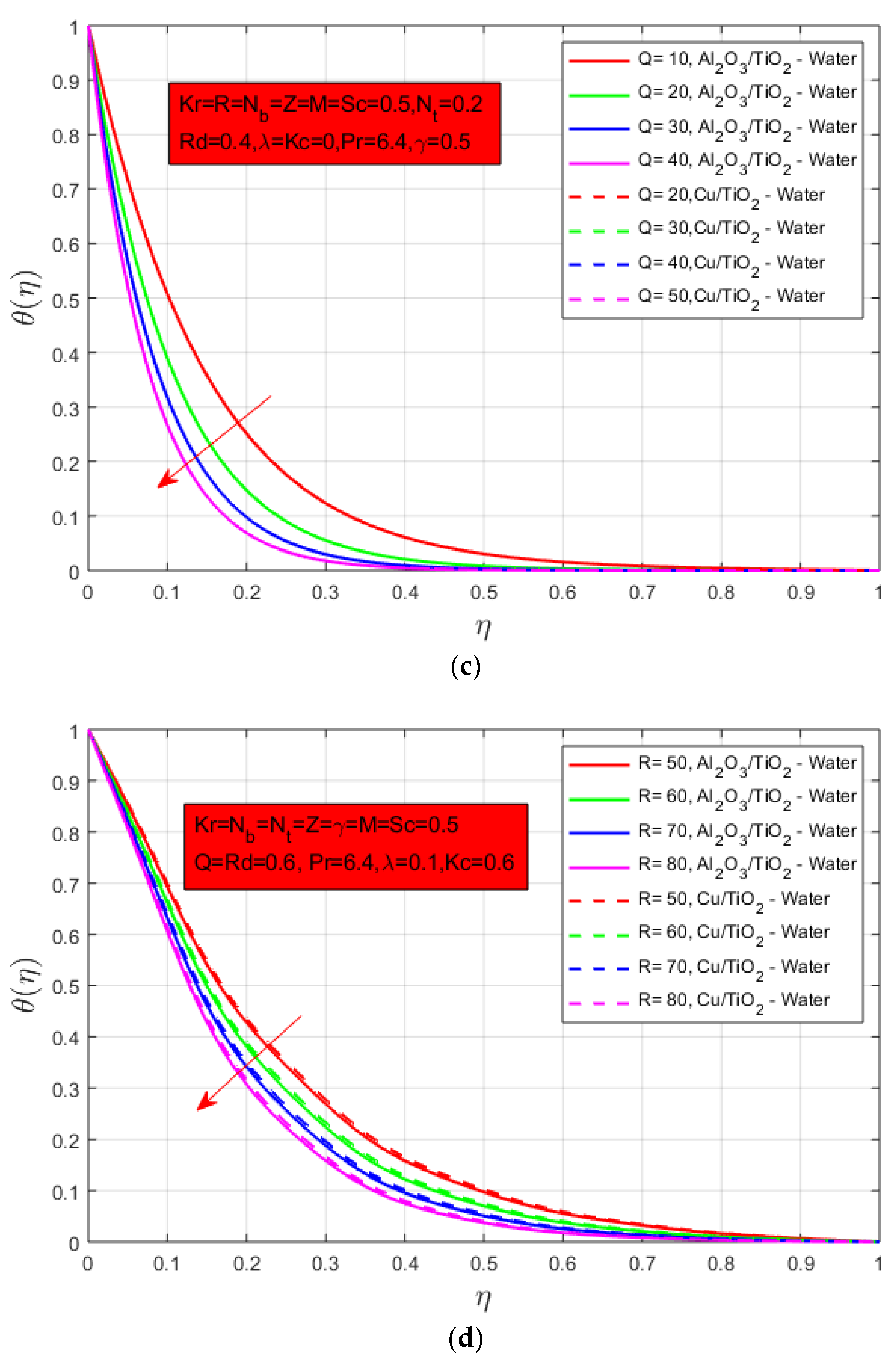 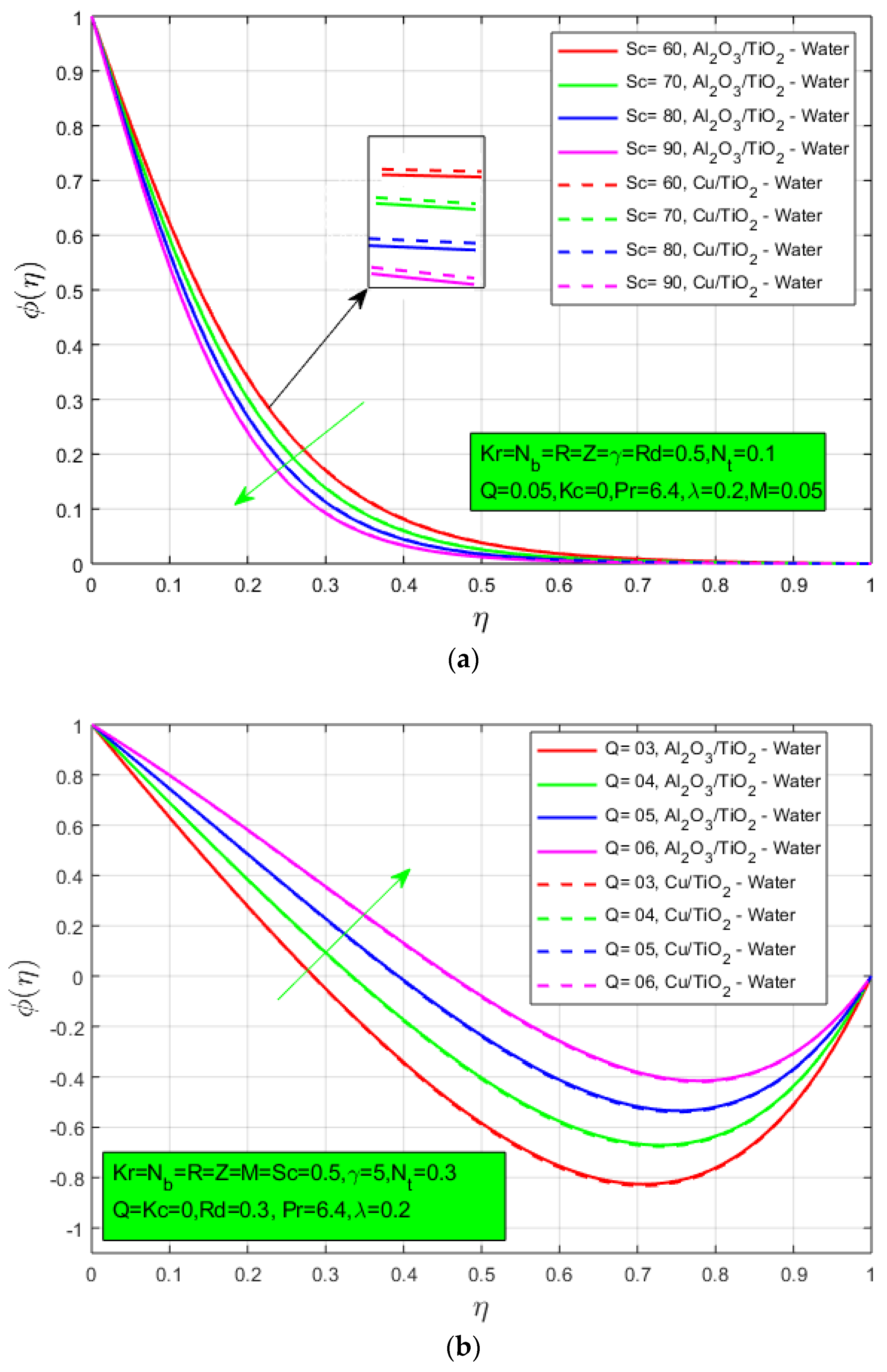