Graphene Oxides Derivatives Prepared by an Electrochemical Approach: Correlation between Structure and Properties

Combining clusters of magnetic materials with a matrix of other magnetic materials is very interesting for basic research because new, possibly technologically applicable magnetic properties or magnetization reversal processes may be found. Here we report on different arrays combining iron and nickel, for example, by surrounding circular nanodots of one material with a matrix of the other or by combining iron and nickel nanodots in air. Micromagnetic simulations were performed using the OOMMF (Object Oriented MicroMagnetic Framework). Our results show that magnetization reversal processes are strongly influenced by neighboring nanodots and the magnetic matrix by which the nanodots are surrounded, respectively, which becomes macroscopically visible by several steps along the slopes of the hysteresis loops. Such material combinations allow for preparing quaternary memory systems, and are thus highly relevant for applications in data storage and processing.
Keywords: micromagnetic simulation; OOMMF; nanodots; antidots; array; spintronics micromagnetic simulation; OOMMF; nanodots; antidots; array; spintronics

The magnetic properties and magnetization reversal of single nanoparticles or nanoparticle arrays are defined by the dimensions and shapes of the nanoparticles, as well as by their material. This interplay between magneto-crystalline and shape anisotropy can lead to unexpected and technologically applicable effects [1,2]. Round and square nanodots, nanodot arrays, and antidot arrays are often examined since they allow for building vortices with reduced in-plane stray fields [3,4,5,6,7,8].
On the other hand, combining different materials either in the form of thin layer stacks or in one plane offers new possibilities of controlling magnetization reversal processes. Most recently, Salaheldeen et al. investigated the overall anisotropies in magnetic hard/soft bilayer antidot arrays and found a crossover from magnetic in-plane to out-of-plane anisotropy due to the interface exchange coupling between the hard Co and the soft Py layer [9]. Verba et al. also coupled soft ferromagnetic thin films and nanodots to a hard magnetic antidot matrix, in this way allowing for tuning the helicity of a vortex or skyrmion in this material [10]. Negusse and Williams reported on exchange-spring materials, based on combining soft and hard magnetic layers [11]. Similar behavior was found earlier by Fullerton et al. [12,13], while Coey and Skomski aimed at finding material combinations with high energy products in their previous studies [14,15]. More recently, Sawicki et al. prepared epitaxial DyFe2-YFe2 superlattices with increased coercivity and exchange spring behavior [16]. Kim et al. prepared soft/hard magnetic composite fibers by electrospinning, combining iron oxide (soft) and cobalt ferrite (hard) magnetic materials, and found a higher saturation magnetization and coercivity than in pure CoFe2O4 [17]. Similarly, Zhang et al. prepared CoFe2O4/La0.7Sr0.3MnO3 soft/hard composites and found different saturation magnetization for different mixing ratios [18].
In our group, previously different in-plane combinations of hard/soft magnetic materials were examined, such as bow-tie structures, double-wedges, and semi-squares [19,20]. Combining the approaches of nanodot/antidot arrays and soft/hard magnetic materials, here we report on magnetically hard nanodots surrounded by a magnetically soft matrix and vice versa, and compare both situations with a pure magnetic hard nanodot array as well as with a mixed array. Our results show clearly different coercive fields and hysteresis loop shapes due to combining both magnetic materials in a nanodot/antidot structure. In addition, partly unexpected magnetization reversal processes occur. This paper is an extended version of [21].

Micromagnetic simulations were performed using the micromagnetic simulator OOMMF (Object Oriented MicroMagnetic Framework) [22] by dynamically solving the Landau–Lifshitz–Gilbert equation on a mesh built by finite differences [23]. To prepare bi-material maps, the function ImageAtlas was used, defining material positions by image files. Material parameters for iron (Fe) and nickel (Ni) were chosen in agreement with average literature values: magnetization at saturation MS,Fe = 1700·103 A/m (MS,Ni = 490·103 A/m), exchange constant AFe = 21·10−12 J/m (ANi = 9·10−12 J/m), and magneto-crystalline anisotropy constant K1,Fe = 48·103 J/m³ (K1,Ni = −5.7·103 J/m³). Average values between both materials were used to define the borders (MS,border = 1095·103 A/m, ABorder = 15·10−12 J/m K1,border = 21.15·103 J/m³) [24,25]; alternatively, the borders can be defined by one of the material properties [26]. To take into account the common production methods of such nanostructures by sputtering, random crystallographic orientations were chosen in each cubic grain of diameter 3 nm. Setting the Gilbert damping constant to α = 0.5 results in the simulation of a quasistatic case. Simulations were performed by sweeping the external magnetic field from positive to negative saturation and back. Investigating the transverse magnetization components MT in addition to the longitudinal hysteresis loops ML ensures that minor loops are avoided. The results of field sweeps along 30°, 45°, and 60° (cf. Figure 1) are shown. Simulations directly along the symmetry axes (i.e., along 0° and 90°) were avoided because such simulations tend to show arbitrary magnetization reversal, depending on smallest symmetry breaking effects, and are thus not reliable. Simulations along 30° and 60° should actually be identical; however, due to the aforementioned random crystallographic orientations, comparing them offers the opportunity to evaluate the possible modifications due to different crystallographic orientations.
The nanodot areas under examination are sketched in Figure 1. Four magnetic dots of diameter 105 nm are surrounded by a square of side length 210 nm. Outside the dots, there is either air or the second magnetic material, in this way forming an antidot array. The system height is 15 nm. No periodic boundary conditions were applied in order to avoid artificial interference effects [27]; instead, this simulation is a first extension of the common single nanodot which will be extended to larger arrays in the near future.

Arrays of hard/soft magnetic material nanodots inside an antidot matrix of the opposite material were investigated by micromagnetic simulations. The results show that magnetization reversal of Fe nanodots can be made more reliable and predictable by surrounding them with a Ni matrix. Oppositely, Ni nanodots in an Fe matrix do not seem to be technologically useful since magnetization reversal occurs via large domain walls through the whole system, located mostly inside the nickel nanodots.
However, more investigation on different distances between the dots is necessary to study other possible magnetic states, such as horseshoe or onion states in the Fe antidot matrix surrounding the nickel nanodots.

The data created in this study are fully depicted in the article.

The authors declare no conflict of interest. The funders had no role in the design of the study; in the collection, analysis, or interpretation of data; in the writing of the manuscript; or in the decision to publish the results. 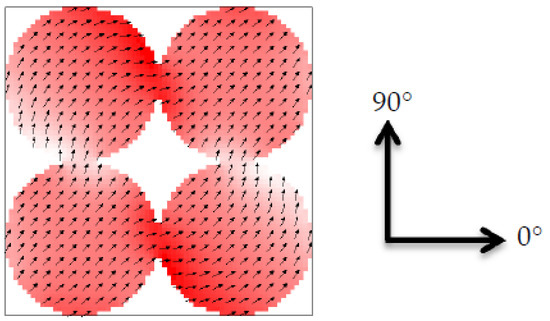 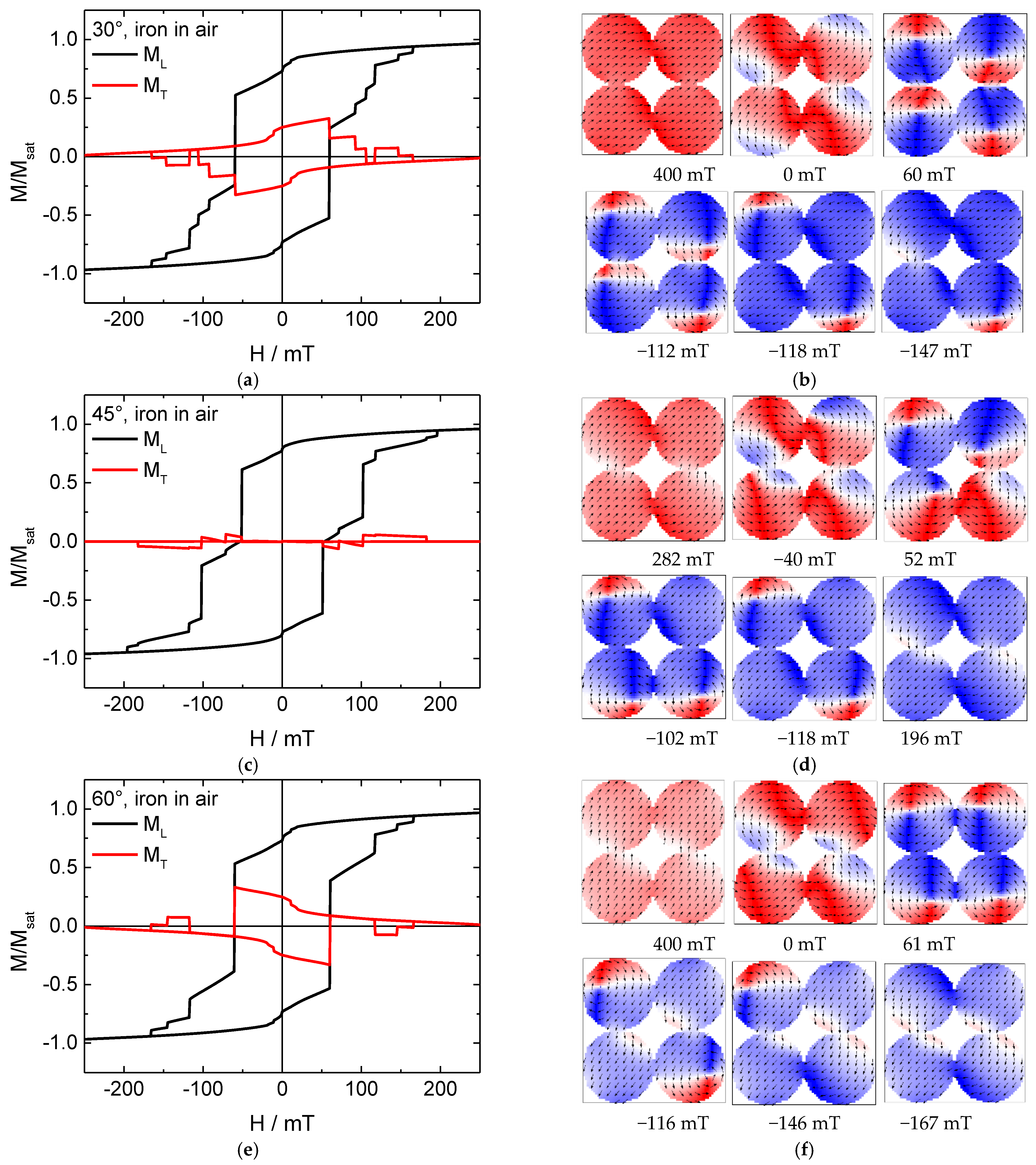 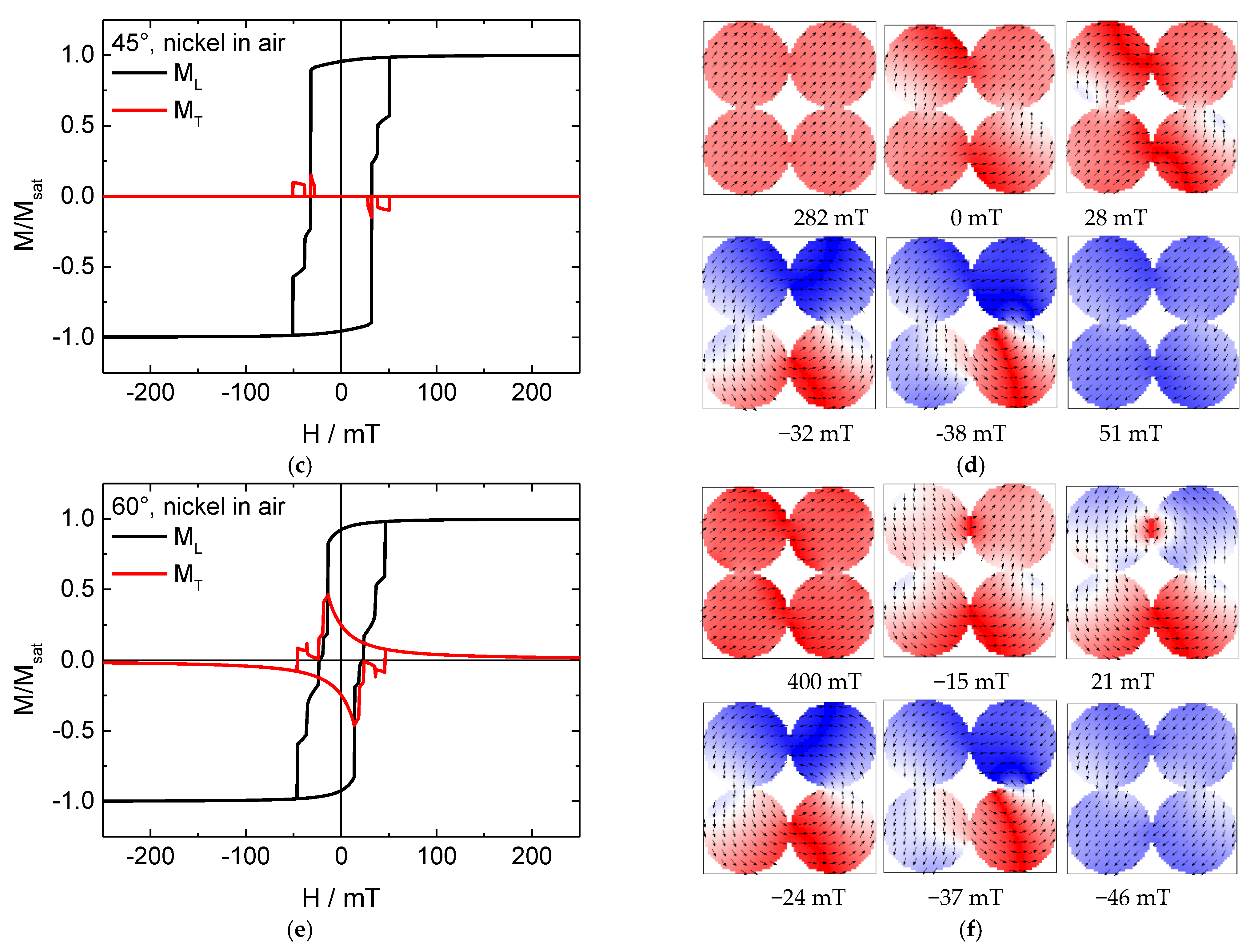 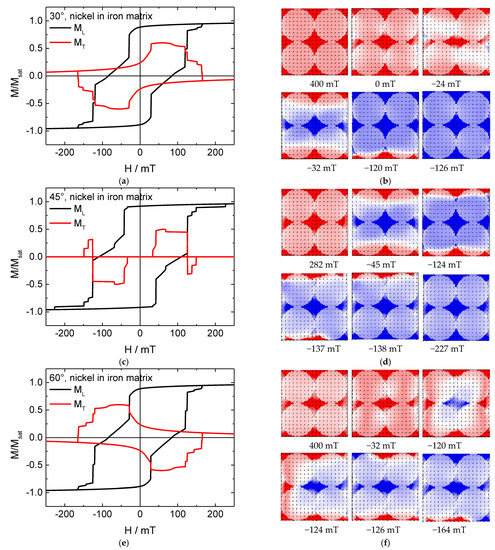