The application and optimal operation of nanoparticle adsorbents in fixed-bed columns or industrial-scale water treatment applications are limited. This limitation is generally due to the tendency of nanoparticles to aggregate, the use of non-sustainable and inefficient polymeric resins as supporting materials in fixed-bed columns, or low adsorption capacity. In this study, magnesium-doped amorphous iron oxide nanoparticles (IONPs) were synthesized and immobilized on the surface of cellulose nanofibrils (CNFs) within a lightweight porous aerogel for arsenic removal from water. The IONPs had a specific surface area of 165 m2 g−1. The IONP-containing CNF aerogels were stable in water and under constant agitation due to the induced crosslinking using an epichlorohydrin crosslinker. The adsorption kinetics showed that both As(III) and As(V) adsorption followed a pseudo second-order kinetic model, and the equilibrium adsorption isotherm was best fitted using the Langmuir model. The maximum adsorption capacities of CNF-IONP aerogel for As(III) and As(V) were 48 and 91 mg As g-IONP−1, respectively. The optimum IONP concentration in the aerogel was 12.5 wt.%, which resulted in a maximum arsenic removal, minimal mass loss, and negligible leaching of iron into water. View Full-Text
Keywords: cellulose nanofibrils; iron oxide nanoparticles; aerogel; arsenic; water treatment cellulose nanofibrils; iron oxide nanoparticles; aerogel; arsenic; water treatment
►▼ Show Figures 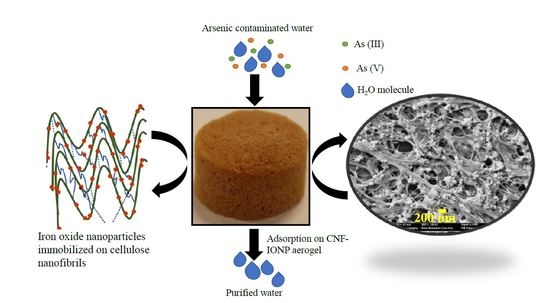