Nanomaterials in Dentistry: State of the Art and Future Challenges

Nanomaterials are commonly considered as those materials in which the shape and molecular composition at a nanometer scale can be controlled. Subsequently, they present extraordinary properties that are being useful for the development of new and improved applications in many fields, including medicine. In dentistry, several research efforts are being conducted, especially during the last decade, for the improvement of the properties of materials used in dentistry. The objective of the present article is to offer the audience a complete and comprehensive review of the main applications that have been developed in dentistry, by the use of these materials, during the last two decades. It was shown how these materials are improving the treatments in mainly all the important areas of dentistry, such as endodontics, periodontics, implants, tissue engineering and restorative dentistry. The scope of the present review is, subsequently, to revise the main applications regarding nano-shaped materials in dentistry, including nanorods, nanofibers, nanotubes, nanospheres/nanoparticles, and zeolites and other orders porous materials. The results of the bibliographic analysis show that the most explored nanomaterials in dentistry are graphene and carbon nanotubes, and their derivatives. A detailed analysis and a comparative study of their applications show that, although they are quite similar, graphene-based materials seem to be more promising for most of the applications of interest in dentistry. The bibliographic study also demonstrated the potential of zeolite-based materials, although the low number of studies on their applications shows that they have not been totally explored, as well as other porous nanomaterials that have found important applications in medicine, such as metal organic frameworks, have not been explored. Subsequently, it is expected that the research effort will concentrate on graphene and zeolite-based materials in the coming years. Thus, the present review paper presents a detailed bibliographic study, with more than 200 references, in order to briefly describe the main achievements that have been described in dentistry using nanomaterials, compare and analyze them in a critical way, with the aim of predicting the future challenges.
Keywords: dental materials; nanomaterials; zeolite; graphene; nanoparticles; nanofibers dental materials; nanomaterials; zeolite; graphene; nanoparticles; nanofibers

Zeolites and other ordered porous materials, including nano-shaped carbon materials, are those in which the surface composition, as well as the porosity and/or shape, are controlled at a nanometric scale. By this manner, it is possible to control several physical and chemical properties, such as the shape/structure at a molecular level, the high surface area and adsorption capacity, ion-exchange ability, uniform porosity, and accessible pore volume. By controlling these properties, it is possible to design functional materials with important applications in energy, environment and medicine. The most important families of porous nanomaterials are zeolites, metal organic frameworks (MOFs) and nanostructured carbons. Due to the important properties that these materials have, during the last decade, several steps in the design and application of porous nanomaterials have been taken and several commercial applications are available in the fields of batteries, CO2 capture, catalysis, environmental applications, adsorbents, etc. [1,2,3]. Nanotubes, nanorods and nanowires (Figure 1) are also nanostructured materials in which the shape and the surface composition are controlled.
These materials present advantages for their use in different biomedical applications since they allow performing molecular-scale medical interventions for treating several diseases or for repairing damaged tissues, and the sizes of the porous/nanoparticles being in the range of the biomolecules. The possibility of controlling the pore volume, shape and diameter, along with the possibility of modulating the surface properties to increase solubility, immunocompatibility and cellular uptake, open the possibility of synthesizing hundreds of nanodrugs with several applications [4]. Through this method, nanomedicine is being developed [5], opening new applications and possibilities. This new concept of medicine is offering new therapies for cancer [6,7], including nanodrugs for killing cancer cells and new methods of cancer tumor detection. The porous nanomaterials can be used as containers for the agent responsible for killing the cancer cell, which can be inside the pore and be released when it reached the cancer cell, or it can be attached to the surface of the material by functionalizing it. The possibility of the functionalization of the surface of the material can confer to it certain magnetic [8,9] or acid-based properties that can be used for forcing the release under controlling conditions. In addition, functionalization is used for including biochemical markers able to detect tumoral cells. These drug delivery properties are also used for the local administration of drugs for several infectious diseases. The local administration of drugs presents several advantages, such as the use of a lower amount of drug, decreasing the side effects in the healthy cells. The applications of these materials are wide, since they can be used to deliver small-molecule drugs as well as various classes of biomacromolecules, such as peptides, plasmid DNA, proteins, and oligodeoxynucleotides. The properties of nanomaterials make them also suitable for the design of new tissue engineered materials, whereas traditional tissue engineering was based on hydrolytically degradable macroporous materials, and current synthesis approaches emphasize the control over the cell behavior and tissue formation at the nano-scale [10].
Despite the revolution that is happening in the medical field due to the development of nanomaterials [11,12], their applications in dentistry mostly remain to be explored, this being a field that will undoubtedly develop a lot in the coming years, modifying the actual protocols for drug delivery and tissue engineering systems in dentistry. To give an idea about this issue, the number of papers during the last 20 years that appeared in Scopus for “zeolite”, “graphene” or “nanotubes” with “dental” or “dentistry”, are plotted in Figure 2. It is interesting to note the low amount of papers in which zeolite applications have been explored, and if the search is done with other families of porous materials, such as MOFs, is done, the number of papers is negligible, indicating that the applications in dentistry of these nanomaterials are not very developed. The search data (Figure 2) indicate that more research efforts have been done with nanotubes and graphene applications, although it can be observed how the interest in graphene has been growing during the last 3–4 years, whereas the number of papers for nanotubes during the last 4–6 years seem to be stable. Thus, since the application of these materials in dentistry are just starting to be explored, it is the aim of the present contribution to review them to date, in order to clarify the work that has been reported in these areas, and which are the future trends. Metal nanoparticles could also be considered nanomaterials, but their properties and applications are different from the nano-shaped nanostructures, which are the main focus of the present paper.

Table 2 summarizes the main applications that nanomaterials present in the most common dentistry applications. All of them present interesting applications in some fields (Figure 4), demonstrating the potential of these materials to improve the characteristics and properties of the materials used in dentistry, such as resins, cements, implants and composites, and also their relevance for the design of new processes for therapeutic treatments and biosensing. However, among them, it seems that graphene and nanotubes, those with carbon composition, seem to be the most promising, especially graphene. As exposed, this is due to the biocompatibility of carbon materials, and to the special structure that they have. The number of papers devoted to both of them (Figure 2) indicate that, twenty years ago, most efforts were devoted to the applications of nanotubes, however, during the last years, research groups have focusing their interest in graphene applications. Since graphene was just isolated for the first time in 2004, it is nowadays when the applications in dentistry are being developed, once that other important issues, such as the synthesis and characterization methods, have been correctly described. As has been discussed, graphene can present better properties than nanotubes due to the sheet structure, especially for mechanical strength and functionalization. Thus, it is expected that this interest in graphene-based material will continue increasing in dentistry, and in the next years, more applications will be described.
Zeolites and other ordered porous materials are also very useful, as has been exposed. These materials can be used in drug delivery, and for some applications their behavior can be quite similar to graphene-based materials, with the advantage that they are less expensive, and easier to synthesize and characterize. Due to this, zeolites and MOFs have been used in many fields of medicine and it is surprising that the low amount of papers devoted to the study of their applications in dentistry (Figure 2), and subsequently, it is also expected that studies will explore them.

V.B.-R. acknowledges permission from University of Seville to perform a research stay at School of Engineering (University of Malaga). 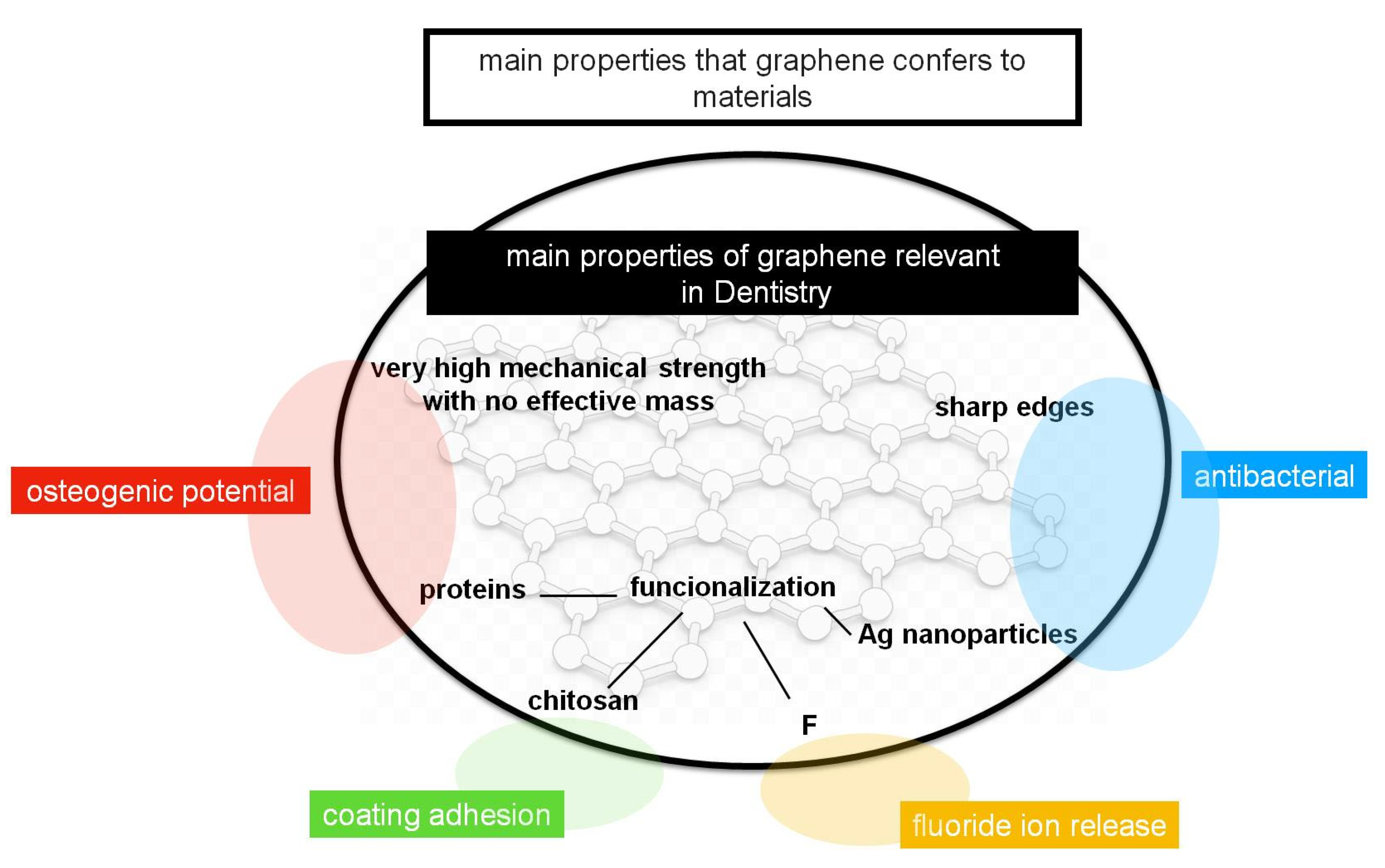 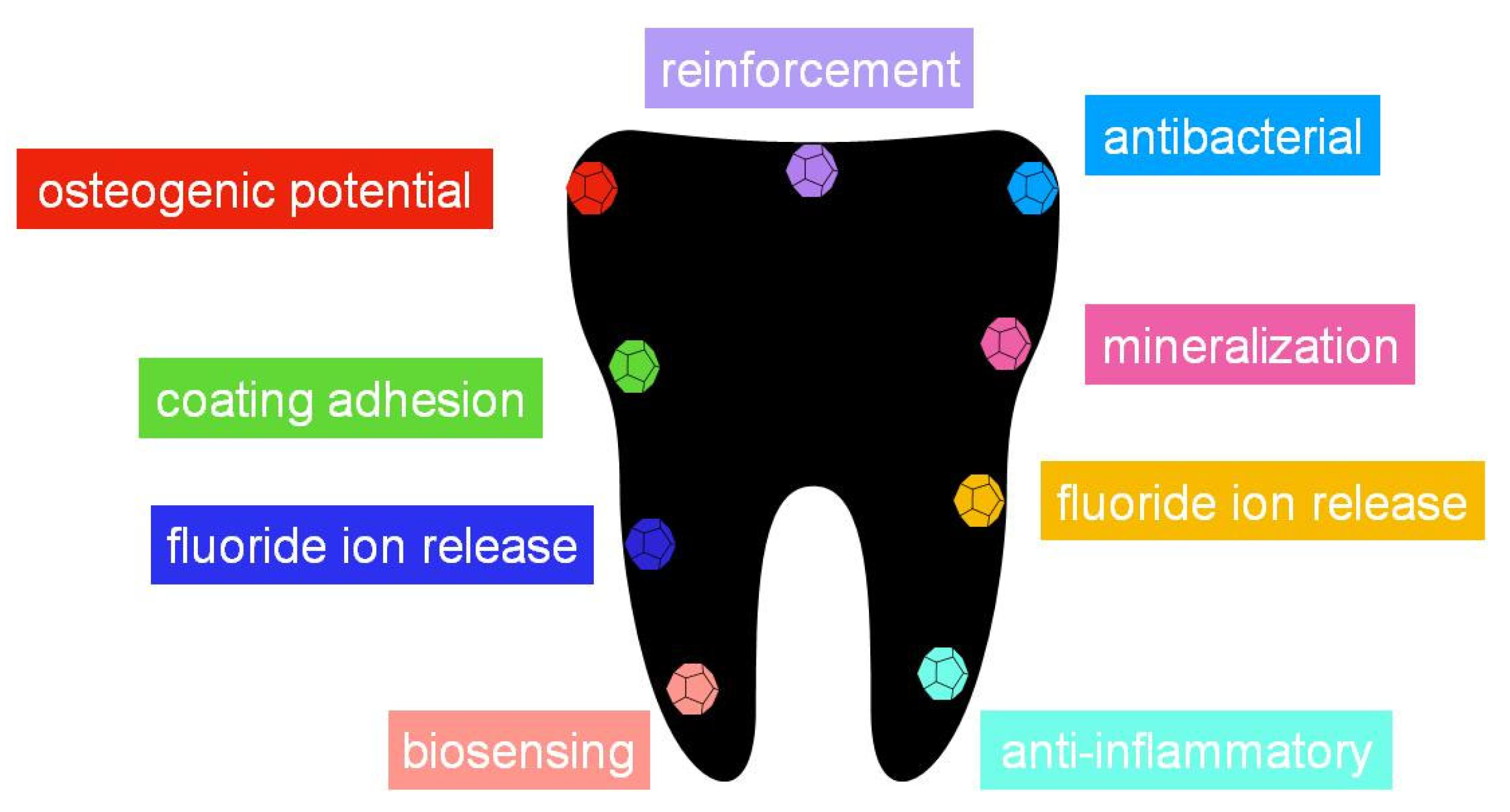