Most previous studies relating to surface-enhanced Raman spectroscopy (SERS) signal enhancement were focused on the interaction between the light and the substrate in the x-y axis. 3D SERS substrates reported in the most of previous papers could contribute partial SERS enhancement via z axis, but the increases of the surface area were the main target for those reports. However, the z axis is also useful in achieving improved SERS intensity. In this work, hot spots along the z axis were specifically created in a sandwich nanofilm. Sandwich nanofilms were prepared with self-assembly and Langmuir-Blodgett techniques, and comprised of monolayer Au nanorings sandwiched between bottom Ag mirror and top Ag cover films. Monolayer Au nanorings were formed by self-assembly at the interface of water and hexane, followed by Langmuir-Blodgett transfer to a substrate with sputtered Ag mirror film. Their hollow property allows the light transmitted through a cover film. The use of a Ag cover layer of tens nanometers in thickness was critical, which allowed light access to the middle Au nanorings and the bottom Ag mirror, resulting in more plasmonic resonance and coupling along perpendicular interfaces (z-axis). The as-designed sandwich nanofilms could achieve an overall ~8 times SERS signals amplification compared to only the Au nanorings layer, which was principally attributed to enhanced electromagnetic fields along the created z-axis. Theoretical simulations based on finite-difference time-domain (FDTD) method showed consistent results with the experimental ones. This study points out a new direction to enhance the SERS intensity by involving more hot spots in z-axis in a designer nanostructure for high-performance molecular recognition and detection. View Full-Text
Keywords: SERS; sandwich; Au nanoring; Ag mirror; Ag cover; electromagnetic field SERS; sandwich; Au nanoring; Ag mirror; Ag cover; electromagnetic field
►▼ Show Figures 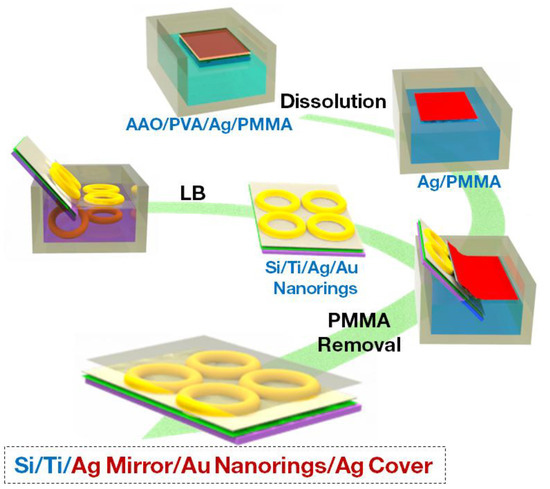