:
In the last decade, biochemical sensors have brought a disruptive breakthrough in analytical chemistry and microbiology due the advent of technologically advanced systems conceived to respond to specific applications. From the design of a multitude of different detection modalities, several classes of sensor have been developed over the years. However, to date they have been hardly used in point-of-care or in-field applications, where cost and portability are of primary concern. In the present review we report on the use of nanostructured organic and hybrid compounds in optoelectronic, electrochemical and plasmonic components as constituting elements of miniaturized and easy-to-integrate biochemical sensors. We show how the targeted design, synthesis and nanostructuring of organic and hybrid materials have enabled enormous progress not only in terms of modulation and optimization of the sensor capabilities and performance when used as active materials, but also in the architecture of the detection schemes when used as structural/packing components. With a particular focus on optoelectronic, chemical and plasmonic components for sensing, we highlight that the new concept of having highly-integrated architectures through a system-engineering approach may enable the full expression of the potential of the sensing systems in real-setting applications in terms of fast-response, high sensitivity and multiplexity at low-cost and ease of portability.
Keywords:
integration; smart-system; portable; sensors; biodiagnostics; optical; optoelectronics; electrochemical; analytics; organics; nanoplasmonics 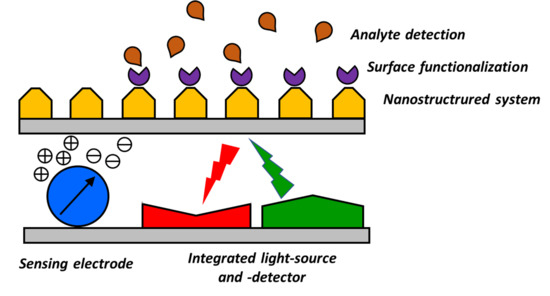 2. Light-Sources and -Detectors Based on Organic/Hybrid Nanostructured Materials and Architectures

In this section we will provide an insight into the detection methods that are enabled by the use of nanostructured materials and might then be integrated into the architecture of the sensor to guarantee high degree of miniaturization together with suitable sensitivity and selectivity for in-field and real-time applications. Given the very broad topic of this contribution, we focus our attention on the detection schemes based on optical probing (and specifically on the high-performing methods related to surface-plasmon resonance effects), but also on non-optical methods such as biochemical and electrochemical methods whose component constituents, however, belong to the same category of nanostructured organic and hybrid materials which has been presented in the previous section. In this way, the reader will have a more general and exhaustive view of the range of possible applications for this category of multifunctional materials.

3.1. Analyte Detection Based on Plasmonic Systems

4. Towards Smart Integration of Nanostructured Components for the Realization of Miniaturized Optical Sensors

In this review we focused on the recent progress, main figures-of-merit and potential of different miniaturized sensing systems based on nanostructured materials. In particular, we reported on the use of organic and hybrid nanostructured materials into optoelectronic, electrochemical and plasmonic elements for highly integrated smart sensors.
The engineering of the functional properties of nanostructured materials through their chemical and structural design, together with the design of the architecture of the single-component devices, is demonstrated to be playing a major role in the realization of effective and integrated detection schemes. Indeed, for on-site bio-diagnostics and environmental/food monitoring purposes, the application of most standard and traditional analytical techniques is in contrast with the current need for rapid, cheap, easy-to-use and portable devices.
Above all, electrochemical and optical chemical sensors are promising tools with interesting analytical features. For electrochemical sensing, the major strategy that is implemented for enhancing both sensitivity and selectivity is the surface modification by nanophase-functional materials. Nanophase materials, such as carbon allotropes, metal- and metal oxide NPs, molecularly imprinted polymers, through different physical and chemical mechanisms, or acting as binders for biological recognition elements, can strongly enhance the limit of detection and analyte affinity of electrochemical sensors.
Optical sensors generally also show a good sensitivity and selectivity. Also, with respect to electronic devices, optoelectronic devices are less affected by external electric or magnetic fields and self-interference effects. The massive development of miniaturized and efficient single optoelectronic components based on nanostructured organic and hybrid materials, which has occurred over the last few decades, has provided enormous potential for the progress of new concepts and applications of optical and optical chemical sensors. In parallel, architecture engineering succeeded in avoiding the need for additional expensive optical components, thus allowing effective miniaturization and multiplexing.
On the other hand, plasmonic and photonic components obtained by nanostructuring allow the sensitivity of optical sensors to be increased. The features of the plasmonic and photonic systems are quite complementary and a new interest emerged in combining them into hybrid multicomponent systems to take advantage of the best properties of both. As one of the main advantages, the same plasmonic/photonic detection scheme can be applied to detect a large panel of molecules, often with a label-free approach (i.e., SPR). Furthermore, a specific functionalization step with biological recognition elements enable to obtain optoplasmonic or photonic chemical sensors with a high selectivity for specific target molecules.
Finally, we highlighted that integration is a key-factor to unravel the potentiality of optical-chemical sensors in terms of disposability, reliability, miniaturization and multiplexing while providing laboratory-quality analysis. In view of developing functional sensors for real-setting applications, a smart and effective system-engineering approach is necessary for realizing fast-responding, non-invasive, broadly adaptable, potentially highly sensitive and multiplexing sensors. Such systems could be employed to overcome existing limitations in measurements which are currently used in environmental and agri-food fields and advanced biodiagnostics. 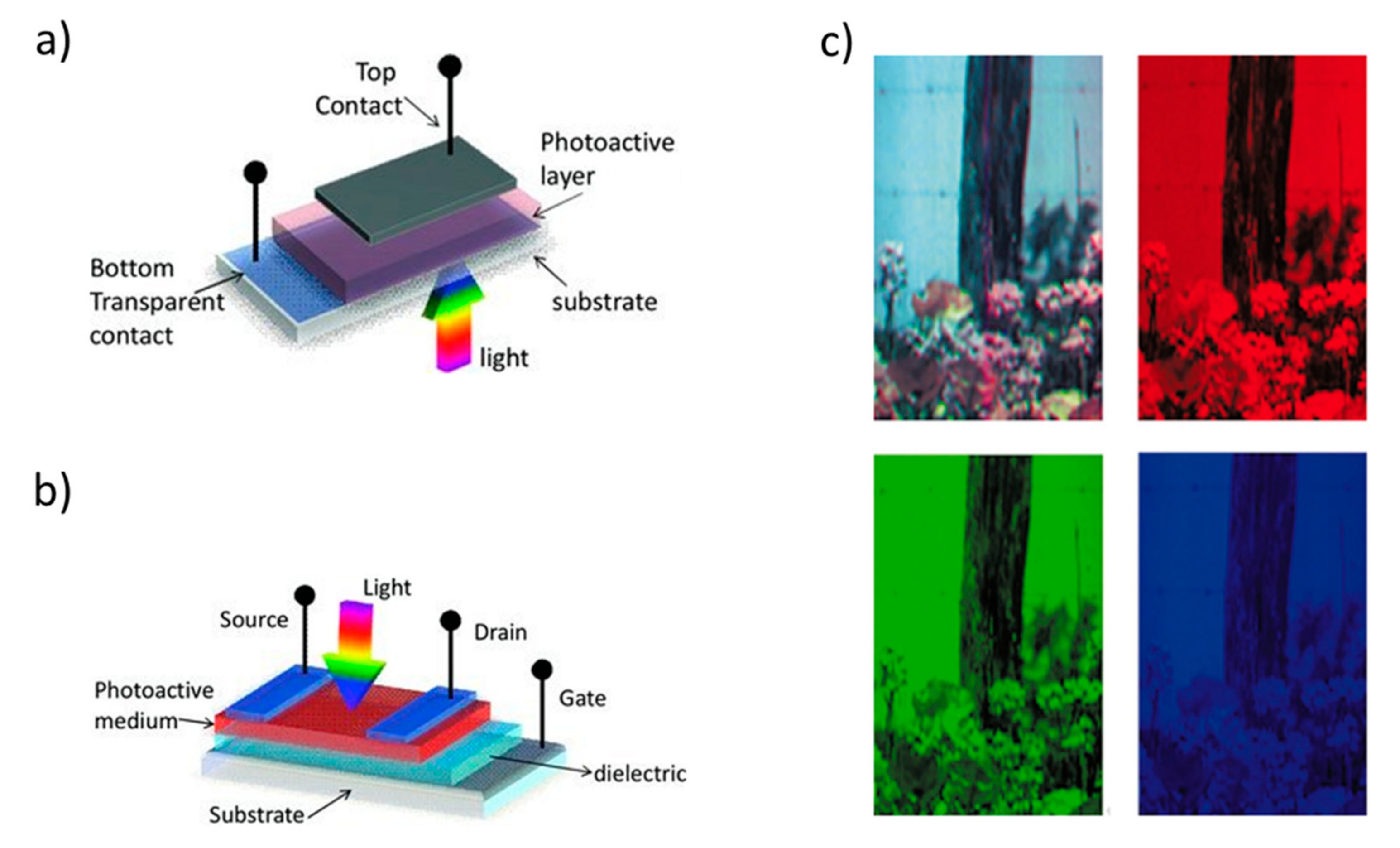 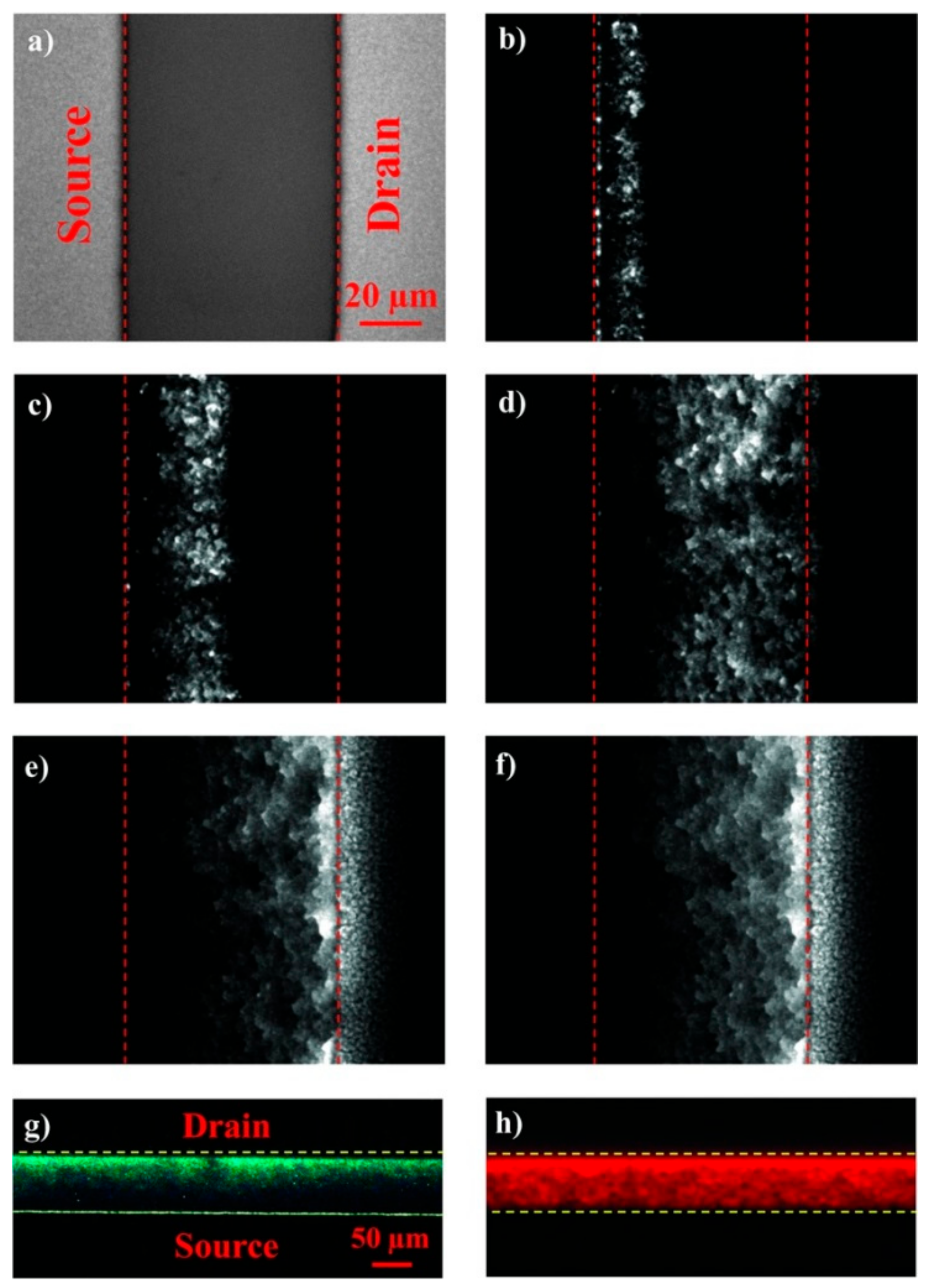 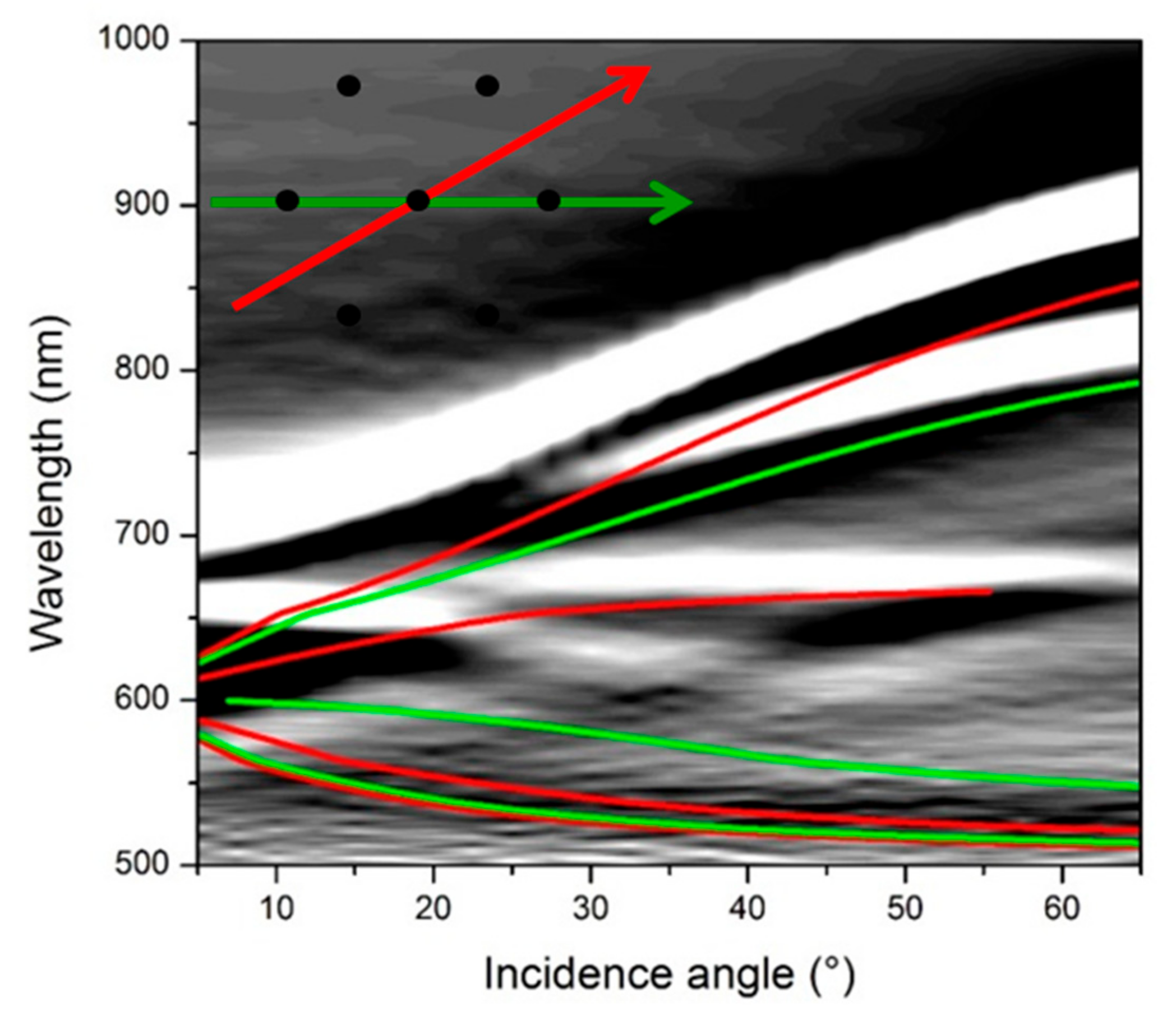 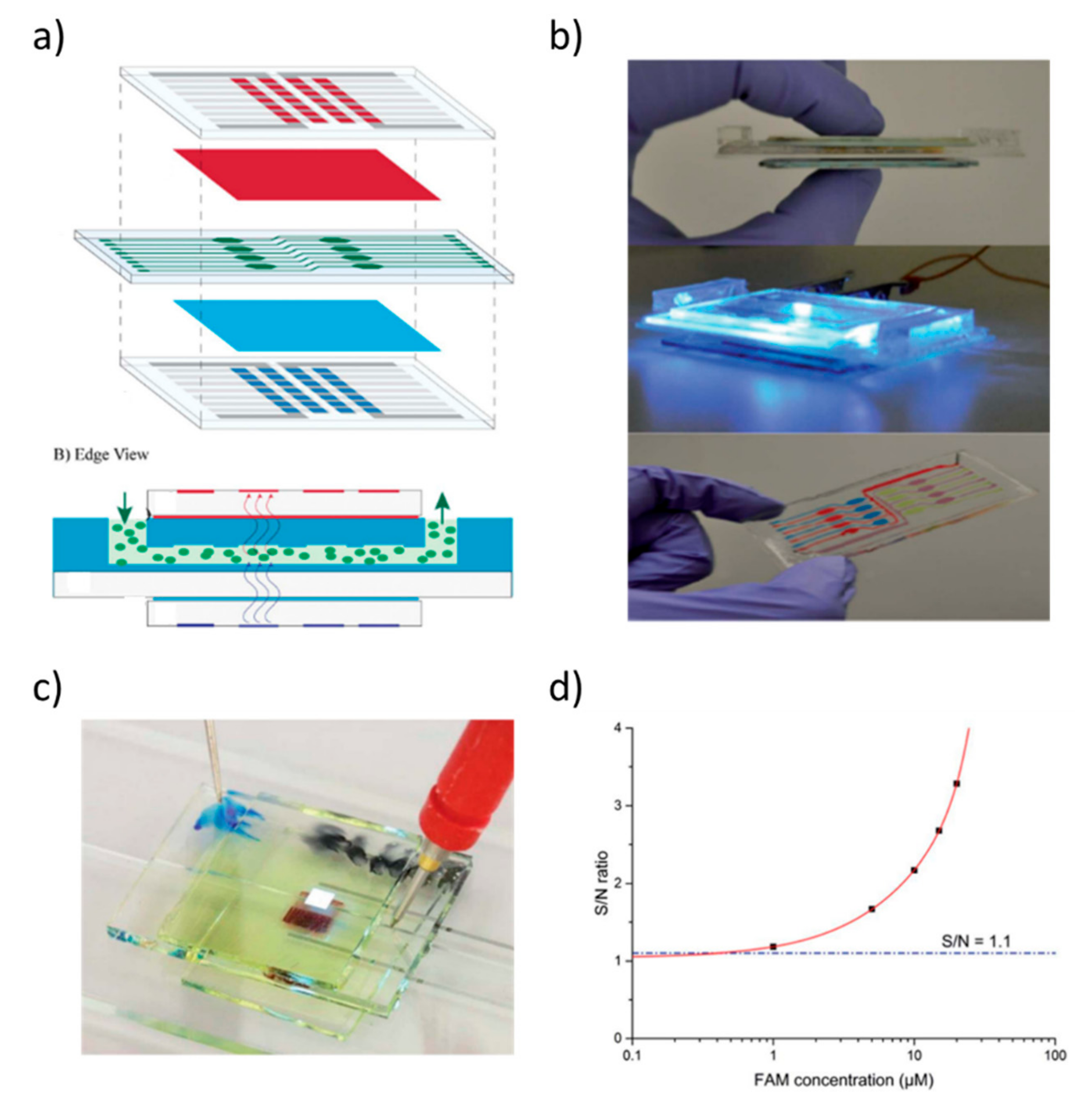