Genotoxicity of TiO2 Nanoparticles in Four Different Human Cell Lines (A549, HEPG2, A172 and SH-SY5Y)

Titanium dioxide nanoparticles (TiO2 NPs) have a wide variety of applications in many consumer products, including as food additives, increasing the concern about the possible hazards that TiO2 NPs may pose to human health. Although most previous studies have focused on the respiratory system, ingestion must also be considered as an important exposure route. Furthermore, after inhalation or ingestion, TiO2 NPs can reach several organs, such as the liver, brain or lungs. Taking this into consideration, the present study focuses on the uptake and potential genotoxicity (micronuclei induction) of TiO2 NPs on four human cell lines of diverse origin: lung cells (A549), liver cells (HepG2), glial cells (A172) and neurons (SH-SY5Y), using flow cytometry methods. Results showed a concentration-, time- and cell-type- dependent increase in TiO2 NPs uptake but no significant induction of micronuclei in any of the tested conditions. Data obtained reinforce the importance of cell model and testing protocols choice for toxicity assessment. However, some questions remain to be answered, namely on the role of cell culture media components on the agglomeration state and mitigation of TiO2 NPs toxic effects. View Full-Text
Keywords: titanium dioxide nanoparticles (TiO2 NPs); uptake; micronuclei; A549; HepG2; A172; SH-SY5Y titanium dioxide nanoparticles (TiO2 NPs); uptake; micronuclei; A549; HepG2; A172; SH-SY5Y
►▼ Show Figures 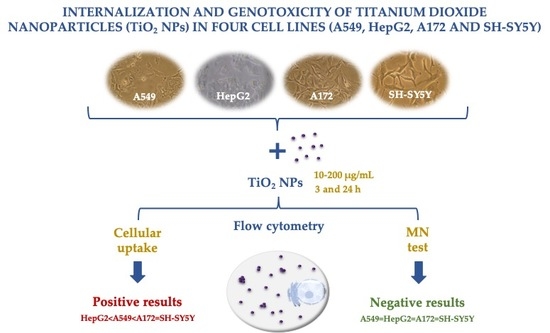