Metal-Based Nanoparticles as Antimicrobial Agents: An Overview
Next Article in Special Issue

A system comprising a gold nanoisland film (Au NIF) covered with a liquid crystal (LC) material is introduced. By applying a voltage across the LC bulk, we demonstrate that changes in the refractive-index and orientation significantly modified the hybrid plasmonic–photonic resonances of the Au NIF. The hybrid structure enabled active control of the spectrum of the resonance wavelength of the metallic nanoisland by means of an externally applied electric field. Our modeling supports the observed results in LC/Au NIF. In a combination of the nanostructured surface with birefringent LCs, nonpolarized wavelength tunability of ~15 nm and absorbance tunability of ~0.024 were achieved in the visible wavelength, opening the door to optical devices and nanoscale sensors.
Keywords: liquid crystal; optical device; gold nanoisland film liquid crystal; optical device; gold nanoisland film

Gold nanoisland films (Au NIFs) with nanosized gaps have been fabricated for applications in imaging and sensing due to their unique surface plasmon resonances [1,2,3]. Au NIFs with surface plasmon resonances in the near-infrared (NIR) region have been utilized to enhance the fluorescence intensity of various NIR fluorophores for imaging and sensing applications. For example, biochips of Au NIFs captured immunoglobulin G (IgG) and IgA antibodies against Zika virus or dengue virus antigens in human serum and then were conjugated with fluorophores of anti-human IgG-IRDye680 and anti-human IgA-IRDye800 [4]. An Au NIF platform showed the ability to amplify the NIR fluorescence of fluorophores of anti-human IgG-IRDye680 and anti-human IgA-IRDye800 by about 100-fold, allowing for highly sensitive detection of Zika virus infection and dengue virus infection. Although Au NIFs have been extensively applied for imaging and sensing applications, the development of Au NIFs of a suitable wavelength and intensity of surface plasmon resonance is still being processed to optimize detection conditions. It is practically significant to enable active control of these plasmon resonance properties by external tuning methods. Such tunability can be achieved by applying voltage, heat, or an illumination profile after incorporating other materials [5,6,7]. Recently, the electrical tuning of nano-antenna resonances in the visible regime was demonstrated [8].
Liquid crystals (LCs) are interesting materials because their electrically induced reorientation of molecules can modify the resonance conditions of optical resonators. Indeed, LCs can be employed to control resonances of metallic nanostructures, including localized surface plasmon resonance (LSPR)-based nano-antennas and surface plasmon polaritons in metallic films [9,10,11,12]. In addition, many plasmonic response combined with LC devices have been proposed in the past [13,14,15]. To the best of our knowledge, a hybrid LC/nanoisland structure has not been reported until now. The tuning ranges of LC-based metallic nanostructures are quite limited in polarized light. However, polarization-independent LC-based plasmonic surfaces have been invented with a large range of the colour spectrum [16]. In addition, the large tuning range of hybrid LC/metallic nanostructures are also proposed in the literature [17].
In this study, we first show the active tuning of Au NIF resonances in a metallic nanostructure embedded in an LC matrix. Tuning was achieved by applying an electric field to the LC/Au NIF device confined by an Au nanostructured substrate and a conducting glass substrate coated with polyimide (PI) for planar alignment of the LC molecules. As evidenced by the voltage-dependent nonpolarized transmission spectrum, a shift in the optical resonance of 15 nm was achieved.

All chemicals were obtained from suppliers and used without further purification. Ammonium hydroxide (NH4OH, 30%), hydroxylamine hydrochloride (NH2OH·HCl, 98%), polyacrylic acid (PAA, Mw: ~100k, 35 wt. % in H2O), and sodium borohydride (NaBH4, 98%) were purchased from Sigma-Aldrich (St. Louis, MO, USA). Dimethylformamide (DMF, 99.5%) and hydrogen tetrachloroaurate(III) trihydrate (HAuCl4·3H2O) were purchased from Alfa Aesar (Ward Hill, MA, USA). Fluorine doped tin oxide (FTO) substrates were purchased from STAREK Scientific Co., Ltd. (Taipei, Taiwan (R.O.C.)). To fabricate Au NIFs, the FTO substrates with a size of 3 × 3 cm were first rinsed with pure water, and then ultrasonically cleaned in acetone, methanol, and pure water for 10 min in each solvent. Then, a carboxylic acid-rich polymer of PAA was pre-coated onto the substrates to improve the adhesion of Au seeds to the FTO substrates. Typically, 200 μL of DMF solution containing PAA (0.7% w/w) was dropped onto a FTO substrate, followed by spin coating at 1500 rpm for 20 s. The speed was subsequently increased to 2500 rpm for 180 s. Afterwards, the FTO substrate with the PAA coating was annealed in an air atmosphere at 180 °C for 1 h. To generate the Au seed layer, the FTO substrate with the PAA coating was immersed in a 45 mL mixture containing HAuCl4 (3 mM) and NH4OH (0.3 M) at 10 °C for 20 min to deposit Au3+ ions. After rinsing with pure water, the FTO substrate was immersed in a NaBH4 (1 mM) solution at 10 °C for 2 min to reduce the adsorbed Au3+ ions to Au seeds. To promote the growth of the Au NIF, the FTO substrate with the Au seed layer was immersed in 50 mL of a growth solution containing HAuCl4 (0.5 mM) and NH2OH (0.5 mM) at 30 °C for 5 min. After washing with pure water, the FTO substrate with the Au NIF was subsequently blow-dried with nitrogen and stored at room temperature in a vacuum and dark environment for further measurements. SEM images of the Au NIF were acquired on a field emission SEM (S-4800, Hitachi Ltd., Tokyo, Japan) with an acceleration voltage of 10 kV. An arbitrary function generator (Tektronix AFG-3022B, Beaverton, OR, USA) was also employed to apply various electrical frequency-modulated voltages. In addition, transmission spectra of the LC/Au NIFs were obtained with a fiberoptic spectrometer (Ocean Optics HR 2000+, Ocean Optics, Largo, FL, USA). All experimental data were acquired at 26 ± 1 °C.

In summary, optical properties of the Au NIFs covered with LC materials are introduced. We demonstrated that the resonance wavelength-dependent refractive index and orientation of the LCs in the hybrid LC/Au NIFs significantly changed when various voltages were applied. The hybrid LC/Au NIF structure enabled the active control of the resonance wavelength of the spectrum in the metallic nanoisland. A combination of the nanostructured surface and birefringent LC opens the door for new electro-optical devices, tunable devices, nanoscale sensors, and additional applications. 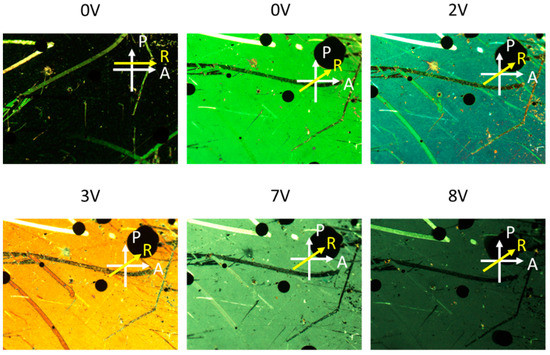 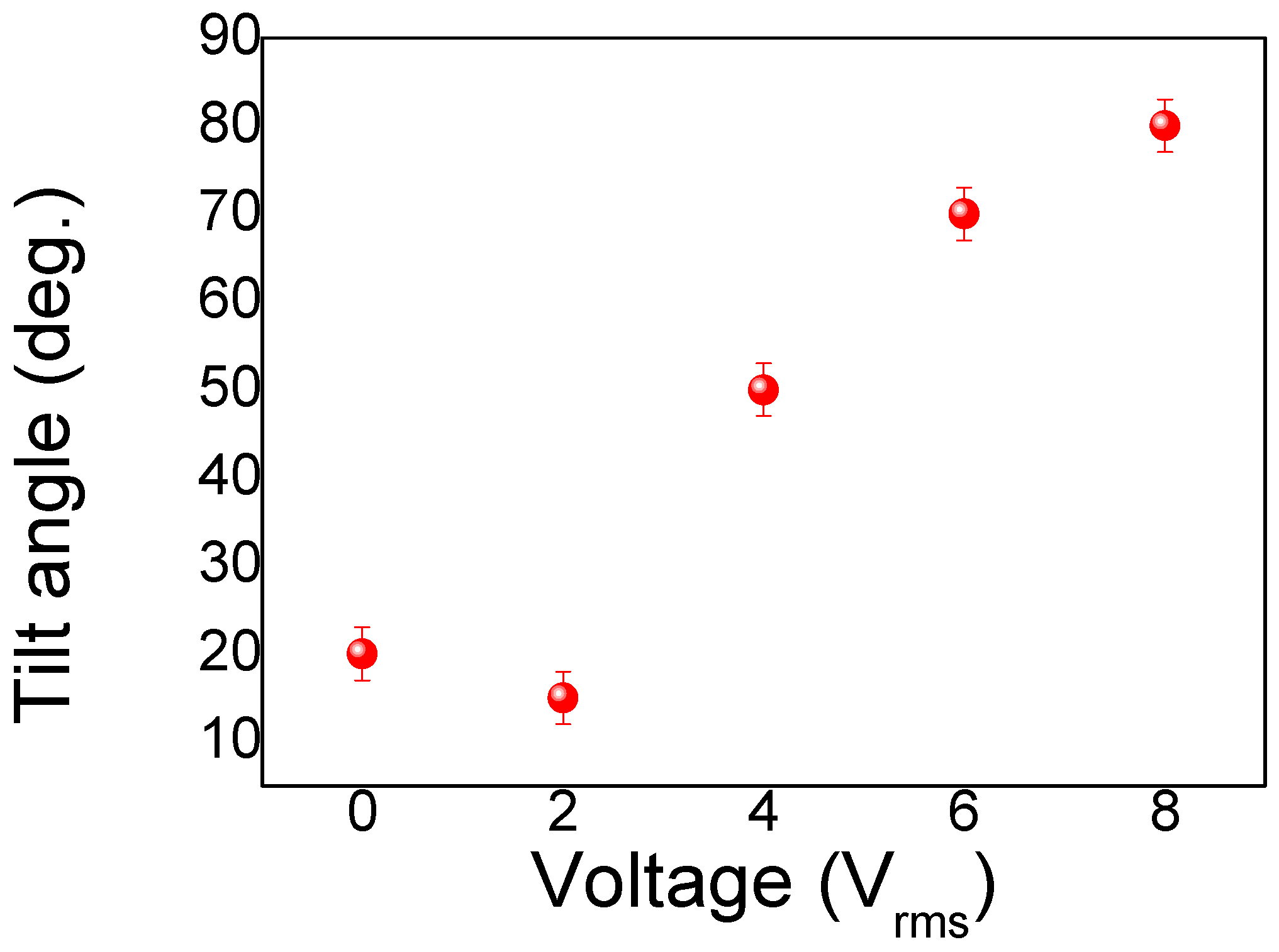