(1) Background: The tissue engineering field has been working to find biomaterials that mimic the biological properties of autogenous bone grafts. (2) Aim: To evaluate the osteoconduction potential of injectable calcium phosphate cement implanted in critical defects in rat calvaria. (3) Methods: In the calvarial bone of 36 rats, 7-mm diameter critical size defects were performed. Afterwards, the animals were randomly divided into three groups according to filler material: a blood clot group (BC), blood clot membrane group (BCM), and an injectable β-tricalcium phosphate group (HBS) cement group. After periods of 30 and 60 days, the animals were euthanized, the calvaria was isolated, and submitted to a decalcification process for later blades confection. Qualitative and quantitative analysis of the neoformed bone tissue were conducted, and histometric data were statistically analyzed. (4) Results: Sixty days post-surgery, the percentages of neoformed bone were 10.67 ± 5.57 in group BC, 16.71 ± 5.0 in group BCM, and 55.11 ± 13.20 in group HBS. The bone formation values in group HBS were significantly higher (p < 0.05) than in groups BC and BCM. (5) Conclusions: Based on these results, it can be concluded that injectable calcium phosphate cement is an osteoconductive material that can be used to fill bone cavities. View Full-Text
Keywords: calcium phosphate cement; biomaterial; bone healing calcium phosphate cement; biomaterial; bone healing
►▼ Show Figures 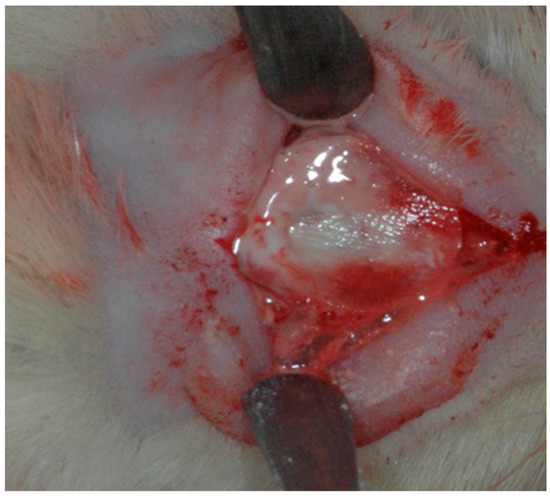