Review of the Augmented Reality Systems for Shoulder Rehabilitation

User navigation in public installations displaying 3D content is mostly supported by mid-air interactions using motion sensors, such as Microsoft Kinect. On the other hand, smartphones have been used as external controllers of large-screen installations or game environments, and they may also be effective in supporting 3D navigations. This paper aims to examine whether a smartphone-based control is a reliable alternative to mid-air interaction for four degrees of freedom (4-DOF) fist-person navigation, and to discover suitable interaction techniques for a smartphone controller. For this purpose, we setup two studies: A comparative study between smartphone-based and Kinect-based navigation, and a gesture elicitation study to collect user preferences and intentions regarding 3D navigation methods using a smartphone. The results of the first study were encouraging, as users with smartphone input performed at least as good as with Kinect and most of them preferred it as a means of control, whilst the second study produced a number of noteworthy results regarding proposed user gestures and their stance towards using a mobile phone for 3D navigation. View Full-Text
Keywords: 3D navigation; large screens; smartphone; Kinect; mid-air interactions; user study 3D navigation; large screens; smartphone; Kinect; mid-air interactions; user study
►▼ Show Figures 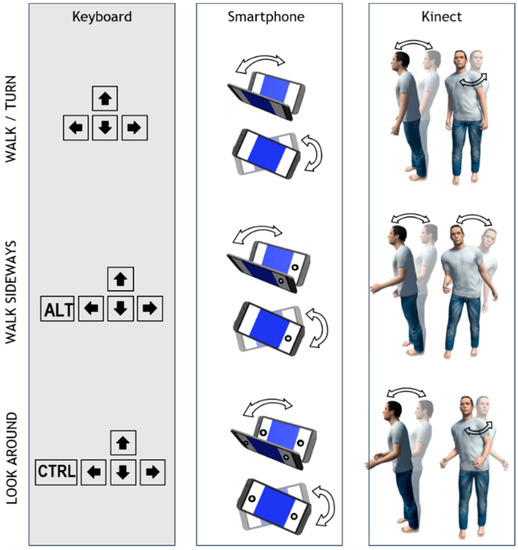 Vosinakis, S.; Gardeli, A. On the Use of Mobile Devices as Controllers for First-Person Navigation in Public Installations. Information 2019, 10, 238.


Vosinakis S, Gardeli A. On the Use of Mobile Devices as Controllers for First-Person Navigation in Public Installations. Information. 2019; 10(7):238.


Vosinakis, Spyros; Gardeli, Anna. 2019. "On the Use of Mobile Devices as Controllers for First-Person Navigation in Public Installations." Information 10, no. 7: 238.