Caulerpa, a (sub) tropical seaweed, is a notorious taxonomic group and an invasive seaweed worldwide. Similar to several species that have been introduced to benthic habitats through aquariums, Caulerpa sertularioides has also been introduced into Korean aquariums, although it is not native to the region. Thus, it is necessary to evaluate the potential of this species for invading domestic macroalgal habitats. Therefore, an indoor mesocosm experiment was conducted to examine the ecophysiological invasion risk of non-native seaweed C. sertularioides under various climate conditions and exposure to three future climate scenarios: acidification (doubled CO2), warming (5 °C increase from ambient temperature), and greenhouse (GR: combination of acidification and warming); additionally, we compared the invasion risk between future and present climates (control: 20 °C and 470 µatm CO2). High CO2 concentrations and increased temperatures positively affected the photosynthesis and growth of C. sertularioides. Photosynthesis and growth were more synergistically increased under GR conditions than under acidification and warming. Consequently, the performance of this potentially invasive species in the native macroalgal Korean habitat will be higher in the future in coastal environments. Therefore, proper management is required to prevent the geographic expansion of C. sertularioides in the Korean coastal ocean. View Full-Text
Keywords: Caulerpa sertularioides; climate change; CO2; growth; introduced species; temperature; photosynthesis Caulerpa sertularioides; climate change; CO2; growth; introduced species; temperature; photosynthesis
►▼ Show Figures 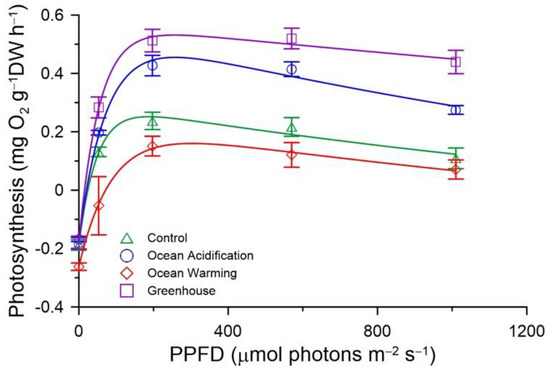