Urbanization and anthropogenic activities have generated significant imbalances in coastal areas. This study analysed the shoreline evolution of the Bay of Cullera (Spain), characterized by strong urban and tourist pressure and with important human interventions during the last century. The evolution of the shoreline was analysed using 60 years of aerial images since the 1950s of the seabed, the maritime climate and the distribution of sediment, as well as anthropogenic actions, such as urban development or the channelling of the Júcar River through the integration of information in a geographical information system (GIS). The results showed: (i) Changes in land-use, in which the substitution of the crop and mountain areas by urban areas was mainly observed. (ii) A general increase in the beach area, although there were important periods of erosion in some points due to anthropic actions. (iii) A significant decrease in the median sediment size in the whole bay since 1987, with a current D50 of 0.125–0.180 mm. The analysis carried out has made it possible to identify trends in coastal accumulation and regression in the different sections of the sector, as well as to demonstrate the usefulness and advantages of GIS. View Full-Text
Keywords: beach erosion; GIS; sand; anthropic; shoreline evolution beach erosion; GIS; sand; anthropic; shoreline evolution
►▼ Show Figures 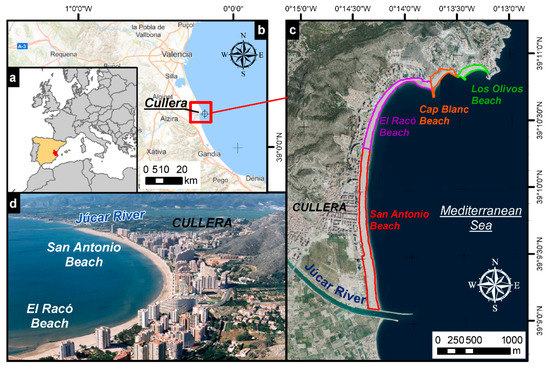